Introduction: Trademark law and the Constitution

Simon Tam describes himself as an “Asian-American musician, lecturer, and political activist.” In 2006, he formed a rock band that he named The Slants, to bring attention to discrimination against Asian-Americans. Tam contends that, by using the name The Slants, he was “following in the long tradition of reappropriation, in which members of minority groups have reclaimed terms that were once directed at them as insults and redirected the terms outward as badges of pride.”

In 2011, Tam applied to the federal government to register The Slants as a trademark – a word, name, or symbol used to identify a good and to indicate its source. Having a trademark allows the person or entity who owns the mark to prevent others from using it and to sue when that right is violated. But an attorney in the U.S. Patent and Trademark Office rejected Tam’s application. The attorney relied on Section 2(a) of the Lanham Act, which bars the government from approving trademarks that contain “matter which may disparage … persons, living or dead, institutions, beliefs, or national symbols, or bring them into contempt, or disrepute.” The attorney explained that the word “slant” is “a negative term regarding the shape of the eyes of certain persons of Asian descent” that has a “long history of being used to deride and mock a physical feature of those individuals.” 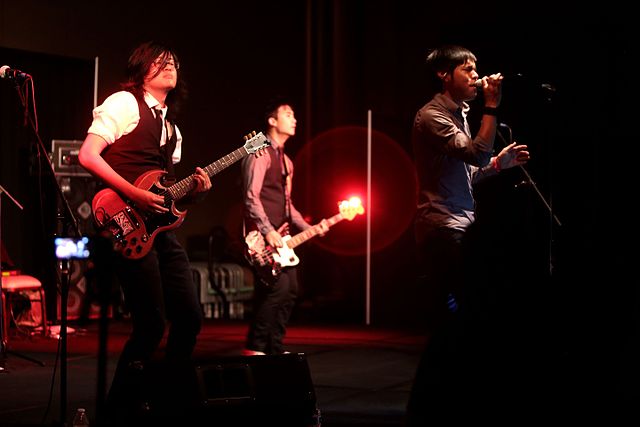 Tam appealed to the PTO’s Trademark Trial and Appeal Board, which affirmed the attorney’s ruling. The TTAB acknowledged that Tam “has good intentions underlying his use of the” phrase The Slants, but it concluded that his good intentions could not “obviate the fact that” many Asian-Americans object to the term. A panel of the U.S. Court of Appeals for the Federal Circuit upheld that decision, but the full Federal Circuit reversed. Although it agreed with the panel that the mark was “disparaging,” it concluded that the Lanham Act’s ban on the registration of disparaging marks violates the Constitution. The federal government then asked the Supreme Court to weigh in, which it agreed to do this fall.

In its brief in the Supreme Court, the government insists that the Lanham Act’s ban on registering disparaging marks is fully consistent with the Constitution. The government emphasizes that the First Amendment bars the government from putting restrictions on speech. That does not, it argues, create “an affirmative right to use government resources to facilitate private speech.” Under Section 2(a), it reasons, the federal government is not restricting speech; it is simply not providing government funds for some speech. The government notes that the court has rejected First Amendment challenges to, for example, federal laws that barred organizations that engage in lobbying from claiming tax-exempt status, as well as federal regulations that bar the use of federal family-planning funds to provide services related to abortion.

Moreover, the government continues, the ban on disparaging marks does not limit Tam’s freedom of speech. It is true, the government concedes, that Tam would receive some benefits from being able to register the mark The Slants – such as being able to prevent other people from using the mark – but the denial of registration does not restrict what Tam “may name his band, what songs he may sing, how he may advertise, or what messages he may convey.” Indeed, the government notes, if Tam “wishes to start a public debate about reappropriating racial slurs and using them as ‘badges of pride’ rather than insults, he is free to do so.”

The government also points out that, just last year, the justices upheld a decision by the state of Texas not to allow an image of a Confederate flag on specialty license plates because “the design might be offensive to the public.” That decision was justified, the government explains, by the state’s “interest in not being associated with certain messages … that the state deemed offensive to the public.” That same reasoning, the government contends, applies fully here.

Tam counters that the disparagement provision is indeed contrary to the First Amendment because it discriminates based on the content of the mark: “It permits the regulation of marks that express a positive or neutral view of a person, but bars the registration of marks that express a negative view.” And, contrary to the government’s argument, the denial of registration to marks deemed disparaging does matter, because having a registered mark gives the owners of the mark “important legal rights.” Tam observes that the cases that the government cites for the proposition that the government can decline to provide funds for some speech without violating the Constitution all involve some sort of subsidy – which trademark registration does not, because someone who registers a trademark does not receive any money from the government. (Even if the trademark registration program did involve a subsidy, he adds, it would still be unconstitutional because it discriminates based on viewpoint.)

Tam also outlines two other grounds on which, he argues, he can prevail even if the Lanham Act’s ban on registering disparaging marks does not violate the First Amendment. First, he contends, even if the disparagement provision is valid, it still does not bar the PTO from registering The Slants. Section 2(a) of the Lanham Act, he emphasizes, only bars the disparagement of “persons,” a term that does not extend to racial and ethnic groups.

Second, he asserts, the disparagement provision is so vague, and gives so much discretion to PTO examiners, that it violates the Constitution. Tam condemns what he characterizes as the PTO’s “sorry record of utterly arbitrary disparagement decisions.” And given how vague the disparagement provision is, he suggests, it creates “a strong incentive to stay away from any name the PTO might conceivably find disparaging, because it can be extraordinarily costly and disruptive to change the name of a product that is already in the market.”

Although The Slants may be best known outside music circles for their legal battles, the band’s dispute with the PTO could have a significant effect on another, better-known group: the Washington Redskins. In 2014, the PTO relied on the disparagement provision to cancel the NFL team’s trademarks, and a federal district court upheld that ruling. The team’s case is now on hold in the U.S. Court of Appeals for the 4th Circuit, after the Supreme Court spurned the Redskins’ request to consider the case at the same time as Tam’s.

The justices will hear oral argument in Tam’s case on Wednesday, January 18. In anticipation of that argument, on Monday the blog will kick off an online symposium on the case. We are delighted to publish posts from expert authors on both sides of the issue, and we look forward to the debate.

Posted in Symposium before the oral argument in Lee v. Tam, Merits Cases