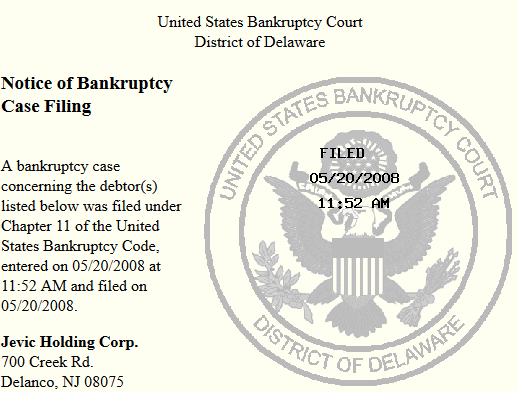 Czyzewski v. Jevic Holding Corp., set for argument on December 7, involves a challenge to the increasingly fashionable use of “structured dismissal” to resolve Chapter 11 bankruptcy cases. Structured-dismissal practice is unlikely to emerge from the case unscathed. If the Supreme Court does reverse the appeals court’s decision upholding Jevic’s structured dismissal, though, it may well tread carefully and deliberately limit the scope of its ruling. A broad holding or rationale could hamstring bankruptcy-court discretion to allow interim distributions in a wide variety of areas, casting doubt on a range of existing practices.

The bankruptcy code allows a company to file under either Chapter 7 or Chapter 11. In a Chapter 7 bankruptcy, the company’s assets are liquidated and distributed to creditors in accordance with statutory priorities. In a Chapter 11 bankruptcy, the bankruptcy court considers a reorganization plan that assigns the various claims and interests to classes and specifies the treatment each class will receive. Impaired classes — those whose legal, equitable or contractual rights are altered by the plan — may prevent confirmation of a plan that does not respect the priority rules set out in Chapter 11.

Jevic is a trucking company that filed under Chapter 11. The petitioners in this case, truck drivers who used to work for Jevic, have a $12.4-million employment-law claim against the company. Although outside bankruptcy the employees would merely be general unsecured creditors, in bankruptcy, whether in Chapter 11 or Chapter 7, their claim has priority to the extent of $8.3 million. In the hierarchy of claims to be satisfied during the bankruptcy proceeding, the employees’ $8.3-million priority portion is junior to secured claims and bankruptcy-related professional fees, but senior to certain lower-priority tax claims and general unsecured claims.

Before bankruptcy, Jevic underwent a leveraged buy-out. In bankruptcy, $53 million of LBO-related secured debt remained on the company’s books. The Official Committee of Unsecured Creditors obtained standing from the bankruptcy court and brought fraudulent-transfer claims on behalf of the bankruptcy estate against the holders of this secured debt; these claims survived a motion to dismiss. One of the secured creditors was also Jevic’s controlling shareholder, and it faced direct claims for the same employment-law violations that the employees had asserted against Jevic itself.

The following deal was cut among Jevic (which was no longer operating), the Unsecured Creditors Committee, and the secured creditors who were defendants in the fraudulent-transfer case: Jevic and the Committee would release the fraudulent-transfer claims in exchange for $3.7 million from the fraudulent-transfer defendants, who otherwise received all Jevic’s assets, and the bankruptcy case would then be dismissed. Pursuant to the dismissal order, the bankruptcy lawyers received $2 million. The remaining settlement proceeds, $1.7 million, were to be used to satisfy the priority tax obligations and then fund a pro rata distribution to all unsecured creditors other than the petitioning employees. These employees, although they were senior in bankruptcy to both the priority tax claims and the general unsecured claims, were frozen out of the settlement, assertedly because Jevic’s controlling shareholder refused to settle on terms that would fund the employees’ continuing litigation against it for employment-law violations. In any event, it is doubtful that the Committee pursuing the fraudulent-transfer claim would have agreed to settle on a basis that would have exhausted the settlement proceeds on the employees’ $8.3-million priority claim. Indeed, even a settlement that treated the employment-law claim as a general unsecured claim (in accordance with ordinary non-bankruptcy priorities) would have severely diluted the small recovery the Committee was able to obtain for its constituents through the settlement. In the end, the petitioning employees were cut out.

Noting that no Chapter 11 plan could be confirmed given Jevic’s inability to satisfy its administrative liabilities, and that neither the employees nor anyone but the secured creditors would receive anything in a Chapter 7 liquidation because a bankruptcy trustee would lack the means to pursue the fraudulent-transfer litigation, the bankruptcy court approved the structured dismissal as the best alternative given the unfortunate circumstances of the case. A divided U.S. Court of Appeals for the 3rd Circuit affirmed.

The petitioning employees argue that Jevic’s structured dismissal unlawfully altered their substantive rights and was not expressly authorized by the code. In effect, they suggest, the structured dismissal was an unlawful Chapter 11 plan skipping over them as priority claimants and distributing value to juniors over their objection. Such an outcome could not be approved as a Chapter 11 plan or in a Chapter 7 liquidation because it plainly violates the code’s priority provisions. Moreover, they maintain, the structured dismissal affects them adversely compared to a straight dismissal, which would have afforded them an equal right with other unsecured creditors to chase the surplus proceeds from a settlement, or otherwise would have restored them to their prebankruptcy position, enabling them to pursue state-law fraudulent-transfer claims for satisfaction of Jevic’s unpaid debts to them. The employees acknowledge that dismissal orders may be conditional, and that the dismissal statute allows the bankruptcy court to alter the normal effects of a dismissal “for cause.” However, they assert, whatever else dismissal orders may do, they may not alter the rights of non-consenting parties by distributing value in a manner that conflicts directly with code priorities.

For its part, Jevic suggests that the court should not have agreed to review this case at all. It argues that the writ of certiorari was improvidently granted, that the supposed circuit split is illusory, and that the lawfulness of structured dismissal is not properly before the court. Rather, Jevic characterizes this case as one about the proper standards for approving bankruptcy settlements. It asserts that the employees, as out-of-the-money non-settling parties, lack standing to oppose the settlement, that the bankruptcy court lacks statutory authority to review it, and that nothing in the code requires settlements to conform to the code’s priority scheme. Any substantive defense of structured dismissals is left to the end of the brief.

Jevic’s assertion that bankruptcy courts lack statutory authority to pass on settlements outside reorganization plans is jarring given the many thousands (if not millions) of settlements made subject to bankruptcy court approval over the last 40 years under the code. Similarly, Jevic’s argument that the employees lack standing to object to the settlement ignores a century of practice establishing that a senior creditor skipped over in favor of a junior has standing to object, at least if the skip is not approved by a class vote of legally similar creditors. Moreover, Jevic affirmatively sought the conditional dismissal order from the bankruptcy court entered in this case. Even if Jevic and the other respondents did not need bankruptcy court approval to implement their settlement, their act of seeking and obtaining an order altering the employees’ rights over the employees’ objection should obviate any standing issue.

This is the rare Supreme Court case in which the parties disagree not only about the proper resolution but also about the contours of the issue the court is being asked to decide. Because the settlement approved here called for and was implemented through a structured dismissal, Jevic’s attempt to characterize the case as one about settlement standards rather than structured dismissals may strike at least some justices as lawyers’ pettifogging. The ships-passing-in-the-night nature of the briefing makes it especially treacherous to predict how the oral argument will proceed, much less how the dispute will ultimately be resolved.

This case could be a bombshell in the world of Chapter 11 if the court follows certain paths. For example, the court might broadly validate structured dismissals, authorizing bankruptcy courts to impose distributional conditions or otherwise vary the parties’ rights and priorities through dismissal orders based on “cause” shown. On its face, the bankruptcy statute does authorize for-cause exceptions to the ordinary effect of a dismissal order – that of returning the debtor and creditors to the prebankruptcy status quo — and does not expressly limit those exceptions. If the court determines that dismissal orders may alter the parties’ substantive rights freely at the bankruptcy court’s discretion, Chapter 11 plans might become even rarer than they already are.

At the other extreme, a broadly written opinion outlawing any pre-plan distribution of bankruptcy estate property or proceeds that deviates from bankruptcy priorities could sharply limit bankruptcy courts’ flexibility to resolve cases by tailoring and conditioning dismissals, sales, financings and settlements. As several “friend of the court” briefs filed on Jevic’s behalf point out, payments are often made in the course of Chapter 11 cases or through court-approved settlements that are in some sense out of order: Critical vendors, customers, employees, secured parties and administrative claimants may receive targeted pre-plan payments; disputed claims may settle with money and property changing hands; executory contracts may be assumed and cured; debtor liabilities may be taken over by buyers in sales; property may be abandoned; and more controversial “gifting” transactions are still permitted in many jurisdictions. Broad holdings or dicta suggesting that all these pre-plan actions must comply with absolute priority or other statutory distributional rules may have severe and unintended consequences for current practices in administering Chapter 11 cases that do not involve structured dismissal at all.

Finally, if the court were to view the case through the lens set forth in Jevic’s brief, a broad holding that bankruptcy courts need not approve settlements or that the code imposes no enforceable distributional constraints for settlement proceeds would be a bombshell of a different character.

Facing these alternatives, in a context in which the justices may (justifiably) be dubious about their ability to discern the implications of their decision, the court may well retreat to its strategy in several prior bankruptcy cases (including its last major foray into absolute priority, Bank of America v. 203 North LaSalle Street Partnership) and simply say that whatever might otherwise be possible in a structured dismissal, a freeze-out of the employees’ priority claims, together with the extinction of their fraudulent-transfer claims, is not permitted, and leave it at that.