Argument analysis: City likely to prevail, one way or another, in fair housing case

In 2013, the city of Miami filed what seemed to many to be an ambitious lawsuit against Bank of America and Wells Fargo. It argued that the two banks had discriminated against African-American and Latino borrowers in issuing mortgages that were particularly likely to lead to foreclosure. The foreclosures were widespread, with near-catastrophic effects on the surrounding communities. And that in turn, the city contended, caused it harm, including by lowering property tax revenues and increasing the money that it had to spend on city services in the affected areas. The basis for the city’s lawsuit was the Fair Housing Act, a 1968 civil rights law that bars discrimination in the sale, rental and financing of housing.

The banks argued that the city’s lawsuit was not the kind of case that Congress intended to authorize when it passed the Fair Housing Act. After the U.S. Court of Appeals for the 11th Circuit allowed the lawsuit to go forward, the banks asked the Supreme Court to weigh in. At today’s oral argument, attorney Neal Katyal – representing the banks – warned the justices that a ruling for the cities would create an “unlimited theory of liability.” Not only could tens of thousands of cities bring similar lawsuits, he cautioned, but scores of other plaintiffs, ranging as far afield as landlords and gardeners who lose business as a result of discriminatory conduct, could also bring lawsuits even if they were not themselves direct victims of discrimination.

Although the justices shared Katyal’s concerns about the potential consequences of their ruling, that may not be enough to allow the banks to prevail in this case, as some justices were clearly willing to allow lawsuits like the city’s to proceed. Two main questions seemed to remain unresolved at the end of the argument. First, will the city be able to garner the five votes that it needs for a ruling on the merits, rather than a decision that simply leaves the lower court’s ruling in its favor intact? Second, if the city can piece together five votes, how exactly will the justices draft a rule that allows the city’s lawsuit to proceed while excluding lawsuits with a more tangential connection to discriminatory conduct? 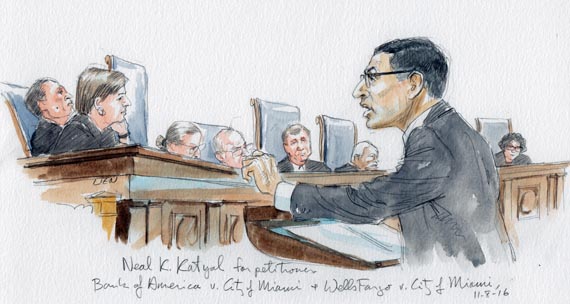 During his stint at the lectern, Katyal tried to tread a fine line. He assured the justices that the banks’ rule would not foreclose all lawsuits by cities under the Fair Housing Act, which he characterized as “one of our nation’s most important laws.” There would be some scenarios in which a city could sue, he promised, but this case is not one of them, because the injury that Miami is seeking to remedy is both “unrelated” to the purposes of the Fair Housing Act and “several steps removed” from the discriminatory conduct that the city alleges.

When Justice Ruth Bader Ginsburg asked Katyal to describe a lawsuit that would be viable, he pointed to some of the Supreme Court’s earlier decisions allowing lawsuits under the Fair Housing Act. Both Ginsburg and Justice Sonia Sotomayor pressed Katyal on his efforts to distinguish the facts and claims of those cases from Miami’s; in response, Katyal reiterated that the earlier cases did not involve, as the banks contend this one does, efforts to “borrow” an anti-discrimination injury suffered by someone else. When someone is directly injured by discrimination, he suggested, he can sue, as can the Department of Justice and the Department of Housing and Urban Development. There is no need for the city to sue instead, he argued.

Justice Elena Kagan was perhaps the justice most skeptical of the banks’ position. She emphasized that the Fair Housing Act isn’t limited to individual acts of discrimination, but instead focuses on harms to the community that result from discrimination. The city is saying, she told Katyal, that it is affected by “reverse redlining” – that is, a practice of charging non-white customers more for their loans than their white counterparts – because reverse redlining makes the community more impoverished, a condition from which it is now trying to recover. “And who better than the city to recognize that interest and assert it,” she asked.

Katyal countered that the city’s lawsuit might be viable if it were complaining about segregation resulting from the banks’ conduct causing blight in the community, which would be an injury that the city itself could assert rather than having to rely on discrimination against someone else. But Kagan saw that as splitting hairs. “Everything about this complaint” filed by the city “is about segregation,” she told Katyal.

Arguing on behalf of the city of Miami, attorney Robert Peck tried to reiterate precisely this point. The city brought its lawsuit, he told the justices, because the banks’ bad loans “actually frustrated and counteracted the city’s efforts on fair housing” and caused the city “to lose the benefits of social, professional, and business opportunities that come with an integrated community free from housing discrimination.” And, he maintained, the city tried to amend its complaint to make this argument even clearer, but was denied the opportunity to do so. Sotomayor seemed to agree, reading a passage from the city’s proposed changes to its complaint which argued that the banks’ conduct “impaired the city’s strong, long-standing, and active commitment to open integrated residential housing patterns and its attendant benefits of creating a stable community.” 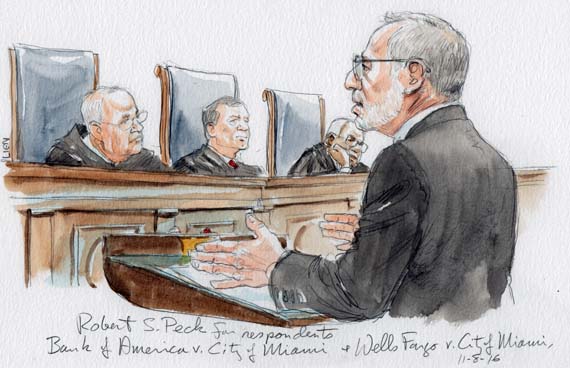 Chief Justice John Roberts and Justice Anthony Kennedy were less convinced. The two seemed especially concerned about the question of what damages, if any, the city could recover if it were to prevail. If the city could recover for the property tax revenue that it lost as a result of the bad loans, Roberts asked, could it also recover for a decrease in tourism revenues? Peck responded that it could not, which prompted Roberts to ask why not.

Justice Stephen Breyer was relatively quiet during the oral argument, but he tried to cut off at the pass the other justices’ worries about how to calculate the city’s damages, asking Peck whether the court needed to decide the damages question at all to resolve this case. Peck – who had emphasized earlier that the damages that the city was seeking were not especially substantial – responded that it did not, but his answer did not mollify Roberts. Instead, Roberts asked dryly whether the court should simply include language in its opinion “along the lines” of “don’t worry,” because the damages “won’t be very much.”

Much of the remaining argument focused on a search for a rule that will allow the city’s suit to go forward but avoid opening the courthouse doors to many more lawsuits. Here too Kennedy and Roberts seemed most troubled about the implications of a ruling for the city, with the latter suggesting that a local business owner would have the same interest in a healthy and integrated community as the city and, under the city’s theory, could recover for lost sales.

Even the justices who were more sympathetic to the city were clearly concerned about drawing a line as well. “How do we write it,” Sotomayor asked Curtis Gannon, who argued on behalf of the federal government in support of the city, so that the city can bring its lawsuit but the corner store that lost business as a result of the foreclosure crisis cannot?

Gannon suggested that property values could play a key role in the inquiry: The corner store, for example, could recover for lower property values but not for a decrease in sales revenues. That rule, he asserted, would be consistent with both the kind of injury that Congress had in mind when it enacted the Fair Housing Act and the injury that the Supreme Court had in fact recognized in an earlier Fair Housing Act case. Neither Gannon nor the justices necessarily regarded this as a perfect or easy rule; Gannon noted that it would, for example, allow real estate agents to bring a lawsuit for a specific transaction that “fails to go through” “because of racial discrimination,” but he acknowledged that it would not allow lawsuits by real estate agents who claimed that their commissions would generally be lower as a result of such discrimination. That may be enough to allow the city to eke out a victory, through either a ruling by an equally divided court that leaves the 11th Circuit’s decision in place or a ruling by at least five justices in the city’s favor. We will likely know more sometime next year.