In the court of public opinion, Stacy and Brent Fry have probably already won. Who would deny their adorable daughter, who was born with cerebral palsy, the opportunity to bring her equally winsome service dog to school with her, to help her with everything from opening and closing the doors to using the bathroom independently? Well, the school district in Napoleon, Michigan, did, which gave rise to the dispute now before the U.S. Supreme Court. But, perhaps fortunately for the school district, whether the Frys’ daughter – known in the litigation by her initials, E.F. – can bring her dog to school is not the issue before the eight justices. Instead, on October 31, the court will hear oral argument on a different (and much more technical) question: whether the Frys could bring their lawsuit directly in federal court or instead were required to first press their case in state administrative proceedings. 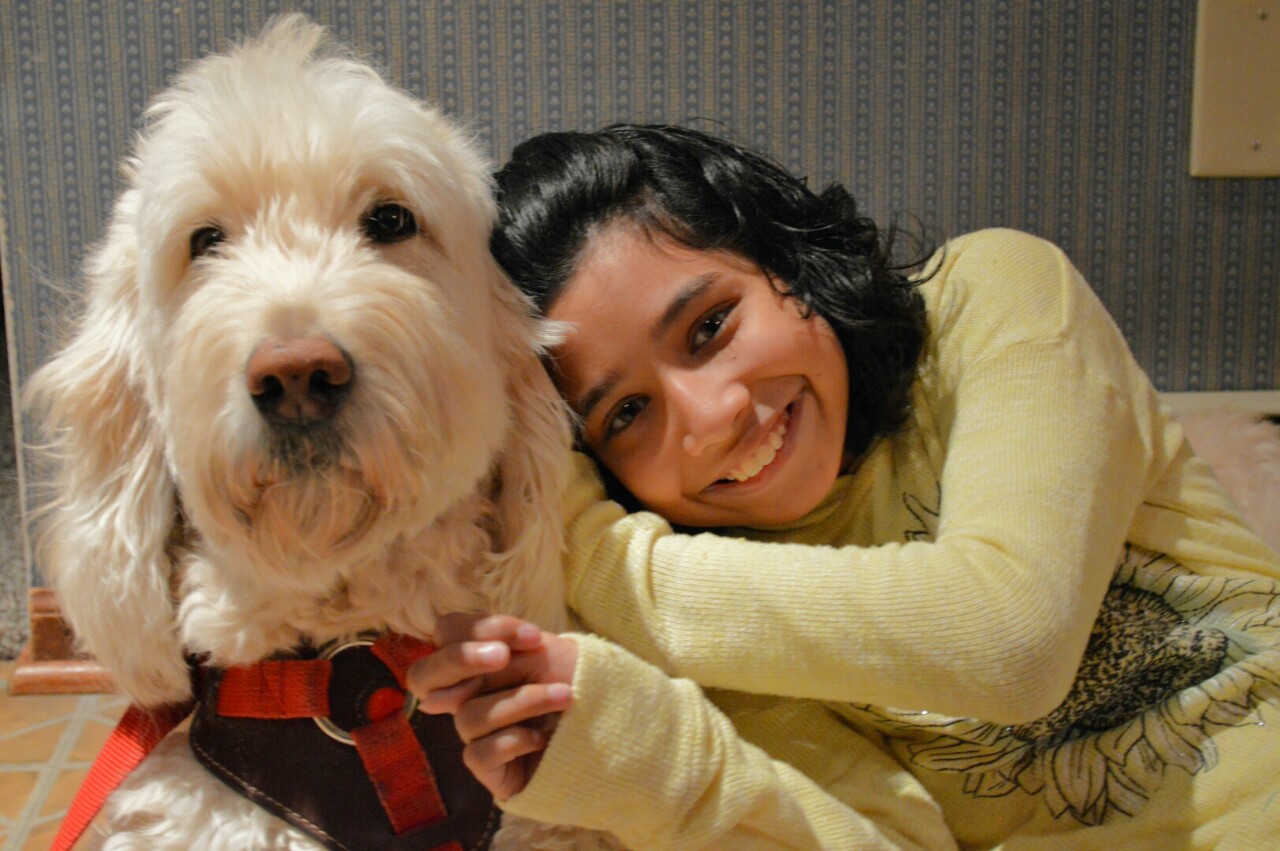 In 2009, the Frys obtained a goldendoodle named Wonder for E.F., who was then five years old. But the local school district refused to allow E.F. to bring Wonder to school with her, explaining that E.F. already had a human aide, who could do all of the things that Wonder could do. After meetings between the school district and the family’s attorneys, E.F. was eventually allowed to bring Wonder to school on a trial basis, but the school district limited his activities: He was not permitted, for example, to go with E.F. when she went to recess or lunch or to use the bathroom. When the trial period ended, the school district decided that Wonder would no longer be allowed to come to school with E.F. That prompted the Frys to pull E.F. from her school and home-school her for two years. They then enrolled E.F. in an elementary school in a neighboring county, where both she and Wonder were “enthusiastically welcomed.”

In December 2012, the Frys filed a lawsuit in federal district court. They alleged that the school district’s refusal to allow Wonder to accompany E.F. to school violated both the Americans with Disabilities Act, which bars state and local governments from discriminating against people with disabilities, and the Rehabilitation Act, which prohibits such discrimination by entities that receive federal funding. They asked the court to award them damages for the “social and emotional harms” that the school district’s actions inflicted on E.F.

The district court dismissed the case, relying on the Handicapped Children’s Protection Act. That statute requires a family “seeking relief that is also available under” the Individuals with Disabilities Education Act, a federal law which obliges the states to make a “free appropriate public education” available to all students with disabilities, to exhaust – that is, avail themselves of – all possible administrative remedies under the IDEA before filing a civil lawsuit pursuant to the Constitution, ADA, or Rehabilitation Act. The U.S. Court of Appeals for the 6th Circuit affirmed, and the Supreme Court agreed in June to review that ruling.

In the Supreme Court, the Frys maintain that they are only required to pursue administrative remedies under the IDEA if they are specifically asking for relief that can be obtained through an IDEA administrative proceeding – which, they contend, they are not. As an initial matter, they explain, they are not alleging that the school district violated the IDEA at all. The school district has repeatedly said that the school’s refusal to accommodate Wonder did not violate the IDEA because “E.F. could learn just as well with a human aide as she could when accompanied by Wonder,” and they have never challenged that assertion. Consistent with that position, the Frys emphasize, their lawsuit does not contend that E.F. suffered any educational harm that can be addressed in IDEA proceedings. Rather, they explain, the issue was E.F.’s independence (or, without Wonder, lack of independence) at school.

And the principal form of relief that the Frys are seeking is damages – which hearing officers are not authorized to award under the IDEA – for what the Frys describe as the emotional harm E.F. suffered when she was not allowed to use Wonder and therefore could not be as independent as she would have been if he were by her side. They are also asking for a declaration that the school district violated E.F.’s rights under the ADA and the Rehabilitation Act – which, they say, an administrative officer lacks the authority to issue under the IDEA – and attorney’s fees, which are also only available under the IDEA for lawsuits brought under that particular statute.

To win their lawsuit, the Frys continue, they have to show only that E.F “was denied the right, guaranteed to any person with a disability, to be accompanied by her service dog in a public facility.” It doesn’t matter that a school, rather than a public park or library, was the institution barring Wonder, they contend: E.F. would have the same case if she were simply attending a play at her school rather than being a student there. A ruling in her favor would not involve a change to E.F.’s Individualized Education Plan, the legal document that is developed under the IDEA for each child with special needs. Instead, they assert, the only change that would be needed would be an amendment to the school district’s general policy, to include service dogs. Indeed, the family suggests, they probably could not even ask for a change to E.F.’s IEP, because they have moved out of the school district and their lawsuit does not allege any ongoing educational harm.

In its brief at the Supreme Court, the school district counters that the Frys are elevating form over substance. It doesn’t matter that the IDEA cannot provide the exact type of relief that the Frys’ complaint asks for, and the Frys’ failure to allege any violation of the IDEA is irrelevant to whether they have to go through IDEA administrative proceedings for claims brought under other laws. Rather, the school district emphasizes, the key question is whether the Frys are asking for something that “may be obtained” through the IDEA’s administrative proceedings; if so, then they must go through the IDEA process first before going to court.

For the school district, the answer to that question is yes. Under the IDEA, it says, administrators could award essentially the same relief as the damages that the Frys seek, as “retroactive reimbursement” for the costs of homeschooling E.F. To the extent that the Frys are asking the court to compensate them for the injuries to E.F.’s independence, the school district reasons, a court would calculate those damages by looking to the costs of the tutoring and therapy that would be needed to help E.F. catch up – which would be very similar to the basis for a monetary award under the IDEA.

And although the Frys contend that they don’t need to go through IDEA administrative proceedings for the additional reason that they are not seeking any changes to E.F.’s IEP, the school district sees it very differently. The relief that the Frys are really asking for, it says, would also “effectively” require the court to declare that the exclusion of Wonder from E.F.’s IEP was “unlawful.” But a “declaration that certain services must be included in the IEP is,” the school district asserts, “the core remedy the IDEA provides.”

Both sides claim that their interpretation is also more consistent with Congress’ purpose in including the exhaustion requirement in the Handicapped Children’s Protection Act. Allowing families to circumvent that requirement just by asking for a federal court for “damages,” the school district argues, would be contrary to Congress’ intent that “parents and school administrators, not generalist courts, have the principal role in resolving disputes over the education of children with disabilities.”

Not so, say the Frys and their supporters: The Frys’ claims under the ADA and the Rehabilitation Act do not require the expertise of an IDEA hearing officer; rather, those claims “will present questions regarding the application of civil rights law of a sort that federal judges address every day.” Lowell Weicker, a former senator who played a lead role in the drafting and passage of the HCPA, adds in a “friend of the court” brief that the act was intended “to eliminate potential barriers to the enforcement of non-IDEA rights rather than imposing them,” while a similar brief from a group of attorneys for and parents of children with disabilities warn that a ruling for the school district in this case “will create onerous, time-consuming, expensive, and confusing procedural hurdles that will hinder families in vindicating distinct” rights under the ADA and the Rehabilitation Act.

Wonder the goldendoodle is now semi-retired, and he no longer goes to school with E.F. But he may be with her at the Supreme Court next week for oral argument. A decision in the case is expected next year.