Argument analysis: The “friends and family” solution for insider trading

Today the justices heard oral argument in the case of Bassam Salman, the Chicago grocery wholesaler who was convicted of insider trading after he made thousands of dollars trading on stock tips from Michael Kara. Michael obtained the tips from his brother Maher Kara, a Citigroup investment banker who was married to Salman’s sister. The question before the court was whether Maher had received the kind of “personal benefit” required by the court’s insider trading cases to hold Salman criminally liable for insider trading. 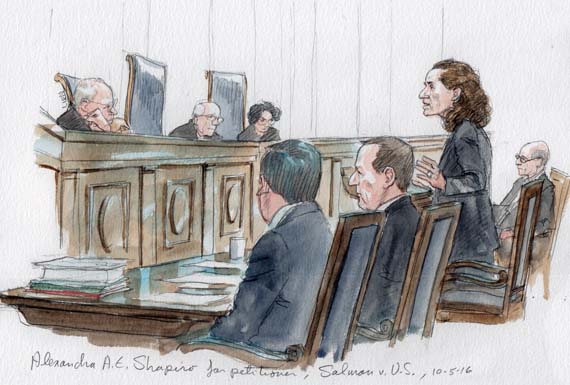 Arguing on Salman’s behalf, attorney Alexandra Shapiro contended that Supreme Court has traditionally construed federal criminal statutes narrowly because it the job of Congress, rather than the courts, to prescribe punishments. The need for such narrow construction is particularly strong in this case, she asserted, because the statute under which defendants are prosecuted for insider trading does not actually define the elements of insider trading. She urged the court to allow criminal liability only when the insider disclosing the confidential business information receives a monetary benefit as a result. No such benefit was received in Salman’s case, she emphasized: At most, she said, Maher got “the scant benefit of getting his brother off his back.”

Shapiro’s argument that some sort of pecuniary gain is required made little headway with the justices. Justice Ruth Bader Ginsburg was first out of the box. What is the difference, she asked, between someone with inside information trading on that information and giving the money to his brother – which would undoubtedly be illegal insider trading – and giving the brother the information to allow him to make his own trades?

Justice Stephen Breyer referred to the disclosure forms that the justices themselves fill out, telling Shapiro that they require a lot of detail, including information regarding the justices’ families. That’s because, Breyer contended, “helping a close family member is like helping yourself.” If the federal government can prosecute cases in which a defendant uses inside information for his own benefit, he continued, why can’t it do the same when an insider uses that information to benefit his family?

Justice Elena Kagan suggested that Salman’s focus on whether the insider receives a pecuniary gain from passing on the information would require the justices “to ignore some extremely specific language in” Dirks v. SEC, a 1983 Supreme Court case. In Dirks, the court ruled that a “tippee” – someone who receives confidential information from an insider and then uses the information to trade – can be held liable for insider trading if the insider violates his duty to shareholders by passing on the information. And that in turn, the court in Dirks reasoned, depends on whether the insider receives “a direct or indirect personal benefit from the disclosure.”

Shapiro tried to emphasize the need for a clear rule, particularly in the absence of any statutory definition of insider trading, and she pointed out that other countries with insider trading laws use much more specific language, providing market participants with more definitive guidance about what conduct is prohibited.

But the justices were again unconvinced. Justice Sonia Sotomayor responded that, in federal criminal laws, Congress doesn’t define terms like “deceptive” or “manipulative.” And the failure to disclose the use of inside information in purchasing stocks is the classic example of fraud, she contended.

Breyer reminded Shapiro that the statute used to prosecute insider trading has been around since the 1930s, and that almost all courts have ruled that it applies to cases in which the insider gives information to a close friend or relative. A ruling in Salman’s favor, he suggested, would change the law on which the marketplace has relied for decades. Kagan echoed this idea, telling Shapiro that she was effectively asking the court to change long-standing rules even though Congress had never voiced any dissatisfaction with them.

Shapiro countered that the integrity of the securities markets was “clearly a policy question,” and a complicated one at that. But Kagan shot back that she wasn’t suggesting that the answers to the questions presented in this case were easy ones, only that they signaled a need for caution in changing a rule that had been in place since the court’s 1983 decision.

Michael Dreeben, the deputy solicitor general who argued on behalf of the United States, faced a slightly more (but not completely) receptive audience. The justices’ chief concern seemed to be how far, if they rejected Salman’s argument that the insider must receive some sort of pecuniary gain for disclosing the information, liability would extend. Could an insider be held liable, Roberts asked, if he disclosed confidential information to his friends in the course of explaining why he couldn’t accompany them on a proposed weekend trip? Dreeben responded that such a situation would not involve the kind of “personal benefit” that would create criminal liability.

Justice Samuel Alito then asked Dreeben whether, if an insider saw someone walking down the street looking glum and, in an effort to cheer him up, suggested that he trade on confidential information to make money, it would violate insider trading laws. Dreeben answered that it would.

The justices balked, however, at the prospect that tippee liability could extend well beyond family members and close friends to others, further down the chain, who receive the information. Dreeben stressed that it might be more difficult to prosecute such individuals, in part because the government would have to show (among other things) that the individual knew that the information came from someone who had improperly disclosed it for his own benefit. But if the government could make that showing, he maintained, those tippees could indeed be held liable.

Kagan proffered a compromise. Observing that virtually all of the tippee liability cases involved either family members or friends, she asked Dreeben why the court couldn’t “separate out that strange, unusual, hardly-ever-prosecuted situation and say we’re not dealing with that here?” Dreeben continued to maintain that the government’s proposed rule – which would apply whenever there was no corporate purpose for the disclosure of inside information, regardless of the insider’s relationship with the person to whom the information was disclosed – was preferable because it was “clearer.” At the same time, he agreed that, if the court was more comfortable with a ruling in the government’s favor that limited liability to friends and family, the government would be “fine with that.” Such a ruling might not count as a complete win for the government, but in this case it would be – as Justice Anthony Kennedy said yesterday in a different context – “close enough.”

A decision is expected by the spring.