The justices were cautious at Tuesday morning’s argument in Samsung Electronics v. Apple, seemingly unsure about how to resolve the high-stakes dispute between Samsung and Apple over the design of Samsung’s cell phones. The court of appeals upheld a $400-million verdict, compensating Apple for Samsung’s copying of the distinctive front screen and graphical user interface introduced with Apple’s original iPhone. The question before the court is whether it was proper to order Samsung to pay Apple all of the profits from its infringing phones, as opposed to some subset of the profits attributable to the infringing features of the phones. 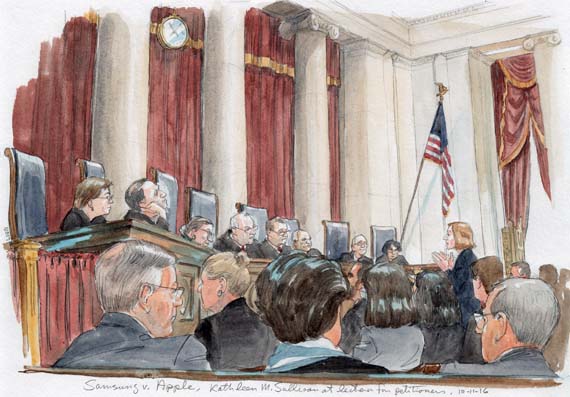 The legal question in the case is whether the “article of manufacture” to which the infringing design feature has been applied is the cell phone itself (as the court of appeals concluded) or some difficult-to-specify subsidiary portion of the phone, perhaps the case or exterior. All agree that Apple is entitled to all of the profits from the “article of manufacture,” whatever that might be, so Samsung can prevail only if it persuades the justices that the court of appeals erred in treating the phone itself as the relevant article.

The most important outcome of the argument is that it confirmed what the briefs suggested – all agree that the court of appeals erred in adopting a blanket rule that the “article of manufacture” is the object sold to consumers, and all agree that the problem ultimately is a question of fact. All three arguing counsel – Kathleen Sullivan for Samsung, Seth Waxman for Apple, and Brian Fletcher for the United States as a “friend of the court” – confirmed their acceptance of those points, and none of the justices seemed to have any hesitation in accepting them. 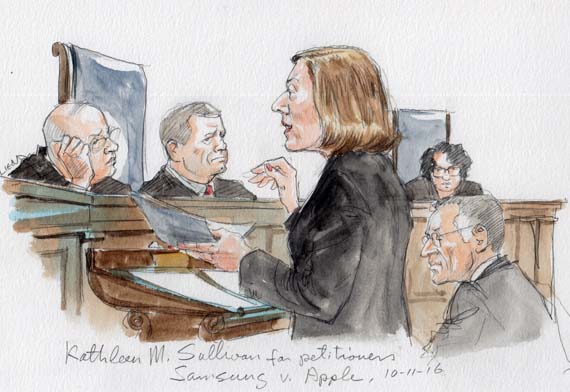 What that leaves, then, is the problem of defining the “article” to which the design is applied if it is something less than the article sold to consumers. Apple’s brief argued at length that the question is not properly before the court, contending that Samsung failed to preserve it in the trial court because it never presented evidence or argument to support any definition of the article other than the phone itself. Largely at Justice Ruth Bader Ginsburg’s invitation, Sullivan and Waxman devoted a large share of their argument time to that issue, with Sullivan insisting that Samsung was “rebuffed” on six separate occasions when it tried to raise the point and Waxman just as firmly insisting that Sullivan’s references to the record were misplaced.

But however much time counsel devoted to that point, several of the justices gave strong indications that they had no interest in resolving it. Chief Justice John Roberts, for example, suggested on one occasion that Waxman should turn to the merits, commenting that “we’re spending an awful lot of time on an issue about what was raised below, what wasn’t raised below, what was raised below, what wasn’t raised.” And whenever Waxman seemed poised to return to that discussion, Justice Sonia Sotomayor would interrupt him, once pleading “please don’t go to the record,” and then again a few minutes later, “please don’t get off track.” 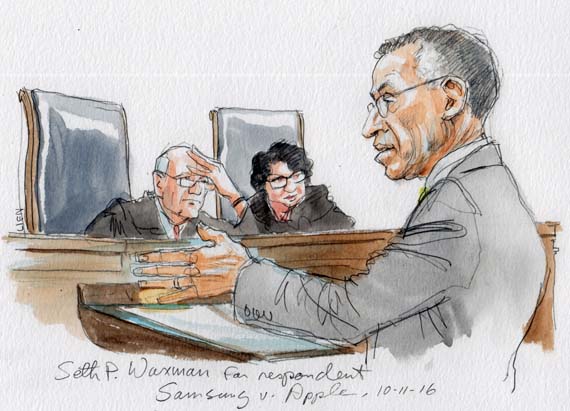 What the justices did want to discuss was what Justice Stephen Breyer called the “tough” question of defining a standard for identifying the article of manufacture. The discussion of that problem was meandering and did not seem to leave any of the justices satisfied, but two points seemed to emerge. First, all seemed to think that the best starting point is a four-factor standard proposed by the solicitor general, which calls for consideration of the scope of the design claimed in the patent, the relative prominence of the design within the product as a whole, whether the design is “conceptually” distinct from the product as a whole, and the physical relationship between the patented design and the rest of the product.

Second, most if not all of the justices seemed to find that standard and the variations proposed by the parties to be unacceptably vague. Justice Anthony Kennedy, for example, repeatedly responded to Sullivan’s discussion with the comment that “if I were the juror, I wouldn’t know what to do. … I’d have the iPhone in the jury room. I’d look at it. I just wouldn’t know.” In the same vein, Kennedy repeatedly interrupted Waxman’s effort to describe the standard by asking, “what is the question of fact? …. What is the question of fact?” Similarly, Sotomayor commented to Sullivan that “I am like Justice Kennedy …. [H]ow do we announce the right test for that? Because the phone could be seen by a … purchasing consumer as being just that rounded edge, slim outer shell. That might be what drives the sale. I don’t know.” Appearing equally unsatisfied with Waxman’s efforts, she commented that “your test has a lot of steps, but I don’t know what it’s going towards.” At the end of the same discussion, Justice Samuel Alito concluded that he didn’t “really understand what [you mean].”

Brian Fletcher offered the suggestion that expert testimony could solve the problem, but several of the justices pressed him on what experts could contribute in the absence of a well-specified standard. Kennedy, for example, asked, “who would they be? What would they say?” and the chief justice asked, “what would they be talking about?” Fletcher’s answer to Kennedy’s demand that he specify the expert testimony that would be produced if the dispute involved the shape of the Volkswagen beetle prompted the chief justice again to say, “I don’t see how [the expert testimony]’s going to tell you whether the shape of the body is distinctive or not.” Similarly, Alito observed that the test often would pose “a difficult question. You’d have to apply numerous factors to determine what is the article of manufacture.”

Breyer seemed to summarize the sentiment of the bench when he reacted to the wide-ranging “disagreement on” how to apply the proposed standard by commenting:

We have a hard-enough question trying to figure out what the standard is. Now, why can’t we just ask the lower courts to listen to your arguments and theirs and work it out? … So if I go through and come to the conclusion … that each side has a good argument …, why don’t we focus on the question that is of great importance across industries and leave the application of that and whether it was properly raised to the lower courts?

In the end, the justices seem ready to conclude that the court of appeals erred in not considering the possibility that the relevant “article of manufacture” might be something less than the entire phone. It seems clear that an opinion stating that conclusion would be enough to reverse the court of appeals, so the court well might stop at that point. To be sure, at least some of the justices seem willing to offer some guidance as to how the court of appeals might decide whether the “article of manufacture” is something less than the entire product. But none of them seemed inclined to decide whether the question remains preserved in this case, so it is not clear that the court will even offer its views on what the standard should be for identifying the relevant “article,” much less apply that standard in this case.

[Disclosure: Goldstein & Russell, P.C., whose attorneys contribute to this blog in various capacities, is among the counsel to the petitioners in this case. The author of this post, however, is not affiliated with the firm.]