Today the justices heard oral argument in the case of Miguel Pena-Rodriguez, a Colorado man who was convicted of assaulting two teenage sisters at a racetrack. After the jury issued its verdict, Pena-Rodriguez’s lawyers learned that one juror, a former police officer, had made racially derogatory comments about Pena-Rodriguez and the witness who provided his alibi – saying, for example, that Pena-Rodriguez must be guilty “because he’s Mexican, and Mexican men take whatever they want.” But a Colorado rule known as the “no impeachment rule,” which bars jurors from testifying about “any matter or statement occurring during the course of the jury’s deliberations,” stood in the way of Pena-Rodriguez’s efforts to get a new trial.

The question before the court today was whether applying the no-impeachment rule to block evidence that the juror was racially biased violates Pena-Rodriguez’s Sixth Amendment right to an impartial jury. Although there was no clear winner, at least five of the eight justices seemed ready to agree that – at least in this case, which Justice Elena Kagan described as having the “best smoking gun evidence you are ever going to see” – it does.

One of the justices’ primary concerns during today’s oral argument was an issue that arises often: where and how to draw lines in their eventual ruling. In Pena-Rodriguez’s case, the worry was that, if the court were to carve out an exception for racial bias in jury deliberations, it might open the door to allegations of other kinds of bias. Chief Justice John Roberts inquired about religious bias, asking attorney Jeffrey Fisher – who argued on behalf of Pena-Rodriguez – what should happen if a juror made statements generalizing about how Catholics or Jews might act. Fisher tried to reassure the justices that his client’s case was limited to the question of race, but Roberts pushed back. He emphasized that the court’s ruling on the racial bias in this case will need some sort of limiting principle to forestall a flood of post-trial bias claims. 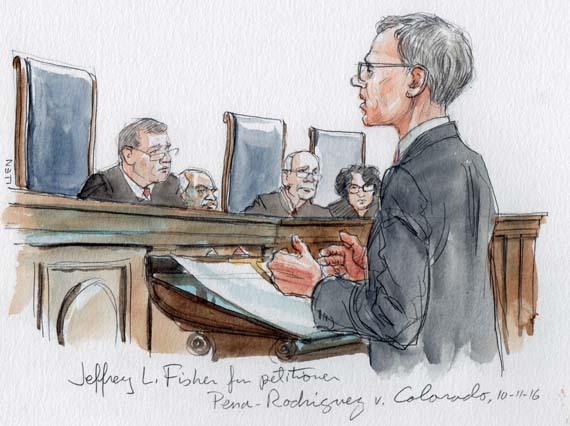 Fisher pointed to the procedural safeguards that would protect against other forms of bias, making it unnecessary to extend any exception to the no-impeachment rule to them, but Justice Sonia Sotomayor seemed to be suggesting that he might be giving away too much. The court has said, she observed, that racial discrimination is the “most odious” form of discrimination. And Kagan soon chimed in, suggesting that the court had treated race as unique in other contexts as well – for example, holding that attorneys must be allowed to ask about race (but not other kinds of bias) when questioning potential jurors.

Justice Samuel Alito seemed unconvinced. Race may be different for some purposes, he suggested, but why should it be different in the context of the Sixth Amendment right to an impartial jury? For example, why should Pena-Rodriguez be entitled to an evidentiary hearing when he is alleging racial bias in juror deliberations, but someone who was sentenced by a jury that flipped a coin to determine guilt or innocence would not be?

Kagan provided a possible answer to this question later, when she told Colorado Solicitor General Frederick Yarger that it would be “artificial” to think about the Sixth Amendment in a vacuum, without accounting for the special harm that is inflicted when someone is punished on the basis of his race. This is particularly true, she said, when race is so associated with stereotypes about criminality – evoking last week’s oral argument in the case of a Texas death row inmate whose own expert testified that blacks are statistically more likely to be dangerous. It’s “just a different kind of harm,” she concluded. 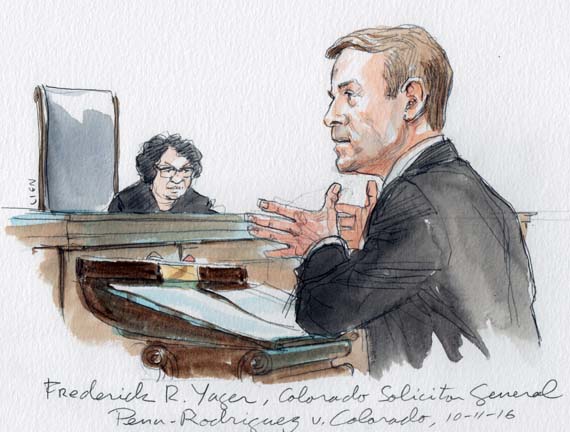 And some justices also expressed concern about exactly what would happen, as a procedural matter, if Pena-Rodriguez were to prevail and a defendant wanted to introduce evidence of racial bias. Fisher explained that the defendant would first have to make a showing of racial bias, and then the judge would determine whether there was a reasonable probability that the bias had affected the verdict. Justice Ruth Bader Ginsburg asked whether all of the jurors would have to come back to testify, while Alito seemed to want to know what standards the judge should use in considering the alleged bias: What if, he posited, one juror has (what Alito described as) “the sensibility of a lot of current college students” and is offended by another juror’s remarks – even if, he seemed to be suggesting, those remarks may not have been all that offensive? Kagan pointed out that the trial judge would have to make precisely the same kind of determination if a juror came to her at an earlier stage of the case, before the jury reached its verdict.

On the other hand, several justices also appeared receptive to Pena-Rodriguez’s contention that allowing evidence of racial bias to be introduced in cases like his has not been disruptive in the states (the precise number of which is disputed) that currently permit it. Sotomayor asked Yarger whether there was any evidence that the states that allow evidence of racial bias to come in after the verdict have been “overwhelmed.” Yarger responded that Pena-Rodriguez had not demonstrated that those states have not been overwhelmed, which prompted Sotomayor to say that Pena-Rodriguez “can’t prove a negative.” And Kennedy observed that, in civil cases, lawyers frequently question jurors about their verdicts all the time.“Is this a problem generally … or … disruptive to the legal system?” he asked.

Some justices also appeared skeptical of the argument, made by both Colorado and the federal government, that attorneys can guard against racial bias infecting juror deliberations by asking potential jurors about it during the process of selecting the jury. Sotomayor, for example, suggested that the argument assumes that jurors would be truthful about their racial biases, while Ginsburg observed that many lawyers might not want to ask about racial biases because they don’t want to be responsible for putting the issue into jurors’ minds. When Yarger tried to reassure the court that things don’t actually work that way, Roberts countered, “How do you know that?” One of the problems here, Roberts indicated, is that asking about racial bias when screening potential jurors might alert other jurors who are biased that they should not reveal their biases.

Yarger also got into hot water with Justice Anthony Kennedy, who had been silent during Fisher’s opening argument. When Kennedy asked Yarger whether the state would adhere to the same rule if this were a capital case, rather than one involving misdemeanor assault, Yarger answered that the same rule would apply equally to capital cases. Rachel Kovner, the assistant to the solicitor general who argued on behalf of the United States, later told Kennedy that the rule would in fact be different for capital cases, because the analysis would also take into account the defendant’s right, under the Constitution’s Eighth Amendment, to be free of cruel and unusual punishment. Fisher would seize on that point in his rebuttal, telling the justices that the government’s reference to the Eighth Amendment reflected a common-sense approach that should apply here as well, and which would allow the court to consider Pena-Rodriguez’s 14th Amendment right to be treated equally under the law when deciding his Sixth Amendment claim.

Alito was the only justice who appeared unalterably opposed to Pena-Rodriguez’s argument, while Kagan and Sotomayor were the two justices who seemed most squarely supportive of Pena-Rodriguez. Although it is impossible to predict with any certainty, there seems to be a good chance that at least three of the four remaining justices (Roberts, Kennedy, Ginsburg, and Breyer) who asked questions are sufficiently disturbed by the bias in this case to issue at least a narrow ruling in Pena-Rodriguez’s favor. A decision in the case is expected next year.