Ruling broadly (but not finally) in favor of a convicted ex-governor’s legal argument, even while denouncing his personal behavior and that of his wife as “tawdry,” a unanimous Supreme Court on Monday made it much harder for federal prosecutors to prove charges of public corruption against elected officials.  The decision in McDonnell v. United States appears to lift a heavy legal cloud from routine political favors, even if done in return for cash, loans or gifts.

Nullifying the prior guilty verdict (and two-year prison sentence) of former Virginia Governor Robert F. McDonnell, the Court ordered lower courts to reconsider whether the government’s evidence of corruption is strong enough to try him again.  If not, the charges against him must be dismissed, according to the ruling.

The legal victory did not come with a laundering of the public reputation of the former governor, once a rising political start in the Republican Party.   Chief Justice John G. Roberts, Jr., concluded the eight-to-zero opinion with these thoughts — applicable as much to the governor’s wife, whose conviction is still awaiting the outcome of a separate appeal: “There is no doubt that this case is distasteful; it may be worse than that.” 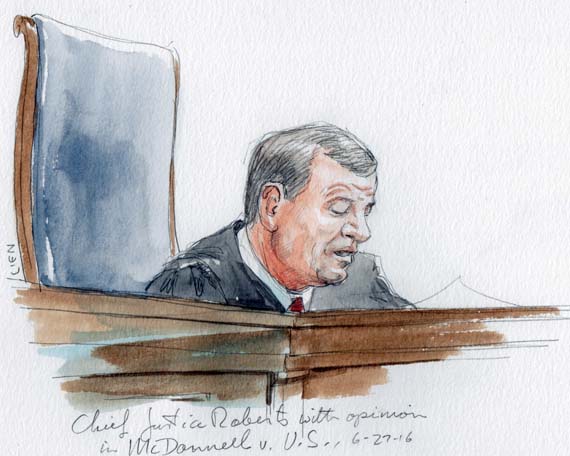 However, the Chief Justice, reciting some of the more vivid items of inducements for the governor or his wife from a favor-seeking Virginia businessman,  said the case was not about “tawdry tales of Ferraris, Rolexes, and ball gowns.”  Rather, he wrote, the Court’s concern is “with the broader legal implications of the government’s boundless interpretation of the federal bribery statute.”

The government, the opinion noted, retains under the Court’s new interpretation of corruption “ample room” for prosecution of elected officials who are charged with taking money and gifts for performing some “official act.”  The decision explicitly refused the ex-governor’s plea to strike down, as too vague, the basic bribery and extortion laws under which he  was convicted.  But by a sharp cutback of what kind of “official act” will be treated as corrupt when done in return for money or gifts, the new ruling poses a major challenge to prosecutors seeking to police official misconduct.

Federal prosecutors had successfully argued, at McDonnell’s trial and in reaction to his appeal, that doing an “official act” in return for gratuities meant “nearly any activity by a public official.”

Insisting that such a sweeping interpretation not only did not square with the text of the criminal laws at issue, but also raised constitutional questions, the Court took several paragraphs to spell out what is, or is not, the kind of “official act” that will expose an official to charges of corruption.

First, the Court said that the kind of government activity that had to be involved was something akin to a lawsuit, a court proceeding, or some other explicit official activity.  Holding a typical meeting, making a call, or arranging an event, when done by an elected official, does not cross the line, the opinion declared.  The matter that a constituent seeks to have influenced by the official, the opinion said, must be an agency proceeding that is “specific and focused.”

Second, the elected official’s move to do a favor regarding such a matter, the Court said, must be an explicit attempt to influence, or coerce another official to influence, the outcome of such a proceeding.  Here is the way the Court phrased that point:

“Setting up a meeting, hosting an event, or calling an official (or agreeing to do so) merely to talk about a research study or to gather additional information…does not qualify as a decision or action on the pending question” of whether a government agency should take an explicit action in favor of a constituent.

The Chief Justice made clear that the decision was driven in considerable part by the Court’s worry that the way McDonnell’s case unfolded — from the prosecutors’ bold charges — was a threat to the way representative government normally works.  “The basic compact underlying representative government,” he wrote, “assumes that public officials will hear from their constituents and act appropriately on their concerns…The government’s position could cast a pall of potential prosecution over these relationships” if the constituents had made a campaign contribution or made a modest gesture of entertainment or an outing such as a ball game.

The Court appeared to have been impressed with the outpouring or support by a wide array of former prosecutors and attorneys general, all of whom had told the Court of the hazards to political life if the government’s definition of “official act” were to prevail.

Even so, the Court also was not putting a stamp of approval on the $175,000 worth of loans, gifts, outings, shopping sprees, and family comforts that the McDonnells had received from Virginia businessman Jonnie R. Williams, as he eagerly sought the governor’s help in having state universities study a health supplement he was trying to market.

Maureen McDonnell was convicted along with her husband and was sentenced to a year in jail.  Her case has been on hold at the U.S. Court of Appeals for the Fourth Circuit, awaiting the outcome of the ex-governor’s appeal to the Supreme Court.  Although the Court did not comment on her case, she very likely will be able to gain from the ruling, especially if her husband’s case now falls apart for the government.