On one hand, United States Army Corps of Engineers v. Hawkes Co. was a gift to an eight-Justice Court: a case with a straightforward legal question and compelling facts that could be decided narrowly, leaving harder issues for another day.  In a majority opinion authored by Chief Justice John Roberts, the Court unanimously and predictably concluded that jurisdictional determinations issued by the Army Corps of Engineers under the Clean Water Act constitute final agency action under the Administrative Procedure Act, meaning they can be reviewed in court immediately.  On the other hand, as the decision’s three separate concurrences reflect, the devil is in the details, and the details here are quite interesting as a matter of administrative law. 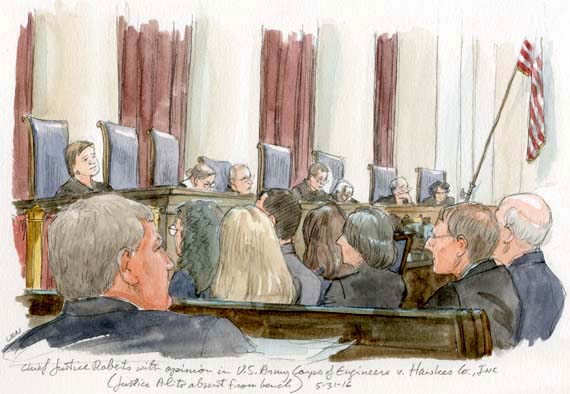 As I described in my preview, this case involves a provision of the Clean Water Act that requires property owners to obtain a permit from the Corps before discharging dredged or fill material into waters covered by the Act.  Sometimes it is difficult to tell whether waters fall within the Act’s reach, and the Corps offers “jurisdictional determinations” (JD) to parties seeking clarification before they undertake the arduous permitting process.  According to Corps regulations, each JD remains valid for five years, unless new information surfaces.  The respondents in this case are landowners who mine peat, a substance used to make flat putting greens – which, as the Chief Justice quipped, “leave golfers with no one to blame but themselves for errant putts.”  They received a JD concluding that their wetland property contained jurisdictional waters.  As it became clear that the permit process would be time-consuming and costly, they sought judicial review of the JD.

The Supreme Court follows a two-pronged test for determining APA finality, established in a 1997 case called Bennett v. Spear.  Both sides agreed here that the first prong was met:  a JD marks the consummation of the Corps’ decision-making process.  The issue for the Court was whether a JD also satisfies the second prong: whether it is an action “by which rights or obligations have been determined, or from which legal consequences will flow.”  In the briefing and argument, the government characterized a JD as a form of non-binding advice that carries no legal consequences of its own, but merely helps parties understand the existing law.  The landowners, in contrast, focused primarily on the practical burdens imposed by a JD – a party receiving an affirmative JD must stop using the property, seek a costly permit, or risk an enforcement action.  The parties also invited a broader reconsideration of Bennett, arguing about whether the test really requires both prongs, and about the relevance of pragmatism to the Bennett analysis.

The Court avoided a broader decision by concluding that the JD meets both of Bennett’s usual requirements.  In concluding that a JD carries legal consequences, the Court relied primarily on a Memorandum of Agreement (MOA) between the Corps and the Environmental Protection Agency (which shares authority to enforce the Act).  As I discussed earlier, the MOA did not feature prominently in the briefs, but the Justices zeroed in on it at oral argument.  The MOA states that “[f]inal determinations” made pursuant to the MOA “will be binding on the Government and represent the Government’s position in any subsequent Federal action or litigation concerning that final determination.”  This provision establishes a liability limit, or safe harbor, for the five-year validity period of a negative JD.  The MOA thereby provides a concrete legal consequence that the case otherwise appears to lack.

But there is a wrinkle.  The government interprets the MOA to apply only to certain “special cases” defined in the MOA, and not to ordinary cases like this one.  At oral argument, the Chief Justice resisted that reading as contrary to the MOA’s plain text, and the opinion followed suit, dismissing the government’s position in a footnote.  Perhaps because hinging a decision on a contested memorandum with little briefing is unusual, the concurring opinions each discussed the MOA further.  Justice Anthony Kennedy, joined by Justices Clarence Thomas and Samuel Alito, linked the MOA to his longstanding concerns regarding the “troubling questions” the Clean Water Act raises about the government’s authority to limit private property rights.  Kennedy’s concurrence noted that even if inter-agency agreements do not ordinarily establish finality, “the Court is right to construe a JD as binding in light of the fact that in many instances it will have a significant bearing on whether the Clean Water Act comports with due process.”  Justice Elena Kagan’s concurrence noted that for her, the MOA “is central to the disposition of the case,” because it provides the requisite legal consequence.  In contrast, Justice Ruth Bader Ginsburg’s concurrence joined the majority opinion except for its reliance on the MOA, given the lack of briefing about the document and the government’s divergent construction of it.  In Justice Ginsburg’s view, the JD at issue had sufficient legal consequences even without the MOA.

The Court’s reliance on the MOA is noteworthy for two reasons.  First, the Court did not even discuss the possibility of deference to the Corps’ interpretation of its own MOA.  Although such inter-agency agreements do not fall within any of the established deference doctrines, like Chevron for statutory interpretations and Auer for regulatory interpretations, some qualities of an MOA track the usual reasons courts defer to agencies – i.e., the agency has superior expertise and familiarity with the question at issue.  The Court’s choice not even to discuss deference may thus reflect what some commentators have perceived as an anti-deference mood in recent Roberts Court opinions (such as Utility Air Regulatory Group v. EPA and King v. Burwell).

Second, if the Court’s analysis turned solely on the MOA, the landowners’ win might be temporary.  At oral argument, the government stated that if it had to lose the case, the MOA would be its preferred basis for decision – because, the government’s lawyer explained, “if the agencies wanted to fix it, they easily could, simply by issuing a new MOA clarifying their view of the – the JD’s effect.”  (Justice Kennedy’s concurring opinion criticized the government’s claim of “unfettered discretion” as exacerbating the act’s “ominous reach,” but did not foreclose such a revision.)

An important question, then, is whether the opinion identifies any legal consequences that flow from a JD, independent of the MOA.  The leading candidate lies in the Court’s discussion of the JD’s practical consequences.  As the Court puts it, a JD effectively “warns that if [property owners] discharge pollutants…without obtaining a permit…, they do so at the risk of significant criminal and civil penalties.” Would this sort of warning, alone, satisfy Bennett?  The Court’s one-paragraph discussion leaves the answer to this question unclear.  The Court states that its finality conclusion “tracks the ‘pragmatic’ approach we have long taken to finality,” and compares this case to a 1956 decision, Frozen Food Express v. United States, in which an order was deemed final when it warned parties of significant penalties but did not directly regulate their conduct.

If the Court intended the JD’s practical consequences to constitute an independently cognizable legal effect, it has muddied the waters of the finality doctrine.  The government’s brief had deemed Frozen Food inapposite because the order there, in the government’s words, “effectively functioned as a rule”: it “set[] the standard” for how “an important segment of the trucking” industry would operate.  In rejecting that distinction, the Court could be read to suggest that effectively warning a party that significant penalties will attach to certain conduct is all it takes to establish a legal consequence.  If that is the case, line-drawing will be difficult going forward.  This is the problem Justice Kagan identified at oral argument when searching for a way to separate JDs from the many forms of beneficial advice-giving that the government regularly provides.

The majority opinion also contains an interesting discussion of the statutory presumption of reviewability that the Court has previously applied in APA cases.  The government had argued that the presumption applies only to actions that are final, not in determining whether actions are final.  The government had also argued that Congress apparently did not intend to make judicial review available before the Corps’ ultimate permit decision, since the act itself does not mention JDs at all – they exist only by the grace of the Corps.  But the Court concluded that the act’s silence regarding JDs barred inferences regarding legislative intent, especially in light of the presumption of reviewability.  Moreover, the Court deemed the Corps’ emphasis that the agency did not need to provide for JDs at all – which the Chief Justice characterized as a “‘count your blessings’ argument” – to be insufficient to overcome the “right to judicial review under the APA.”

Finally, the Court did not rule on any possible changes to the doctrine of Bennett v. Spear.  It wrote in a footnote that, having found both of the Bennett prongs satisfied, it did not need to consider the landowners’ argument that meeting only the first prong would suffice.  In a footnote in the separate opinions, Justices Kagan and Ginsburg noted disagreement about Bennett’s effect on the Court’s earlier opinions in Abbott Laboratories and Frozen Food.  These issues, like many others this Term, will await another day.

The landowners in this case sought immediate appeal of an Army Corps “jurisdictional determination” (JD) that wetlands on their property were subject to regulation under the Clean Water Act.  The government disagreed, arguing that JDs are not final within the meaning of the Administrative Procedure Act.  The Court sided with the landowners, concluding that JDs meet the requirements for finality.