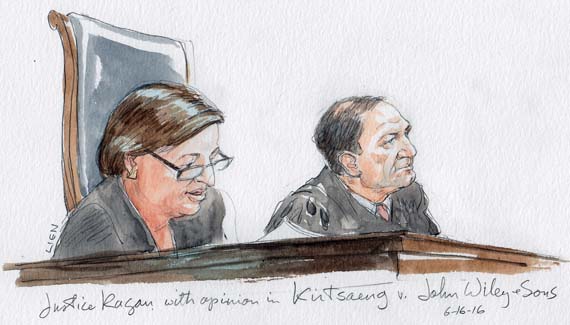 Thursday morning brought the first decision from the April argument session, Justice Elena Kagan’s opinion for a unanimous Court in Kirtsaeng v. John Wiley & Sons. This was the case’s second time before the Court.  Three years ago, the Court held by a vote of six to three that the “first sale” doctrine of copyright law made it lawful for Kirtsaeng to resell foreign-made books in the United States. The question this time around is whether Kirtsaeng can recover his attorney’s fees from John Wiley, the publisher who sued him.

The case is closely related to Monday’s decisions in Halo Electronics v. Pulse Electronics and Stryker Corp. v. Zimmer Inc., in which the Court rejected the Federal Circuit’s rigid framework for applying a patent statute under which a district court “may” award treble damages.  This case turns on Section 505 of the Copyright Act, which provides that a trial court “may … award a reasonable attorney’s fee to the prevailing party.” The opinion here emphasizes the same two points as the opinion by Chief Justice John Roberts in Halo and Stryker: the statute affords broad discretion to the district court, but that discretion is not limitless.

On the first point, the opening pages of the opinion repeatedly quote the same passages as Monday’s opinion, emphasizing that discretion is more than judicial “whim,” and that a motion “to [a court’s] discretion is a motion, not to its inclination, but to its judgment; and its judgment is to be guided by sound legal principles.” The bulk of the opinion offers three points about those “sound legal principles.”

The first point is the easiest one, agreeing with both of the lower courts that the reasonableness of a party’s position is an important factor in assessing the need for a fee award.  It is easy to justify a fee award against a litigant who unsuccessfully advances an unreasonable position.  The publisher here likes that factor – because three Justices agreed with the publisher’s position the last time the case was in the Supreme Court, all admit that the publisher’s position was reasonable. Strike one for Kirtsaeng.

The Court’s second point is to reject Kirtsaeng’s argument that fee awards are appropriate for cases that “meaningfully clarify” copyright law.  The Court was not persuaded that awarding fee awards in meaningful cases would advance copyright goals substantially, in part because it always would raise the stakes in such cases (which might or might not encourage them) and in part because it would be difficult to administer.  Because that point was Kirtsaeng’s centerpiece argument for awarding fees despite the reasonableness of the publisher’s position, the Court’s rejection of it leaves Kirtsaeng with little remaining hope of a fee award.  Strike two for Kirtsaeng.

The Court’s final point, though, returns to the theme of discretion from which the Court’s analysis started.  The Court explained that the reasonableness of a party’s litigating position is at most a factor in the analysis, and “not the controlling one.” Thus, the Court specified, a trial court retains discretion to award fees against a reasonable litigant. To give content to that idea, the Court approved two lower court decisions that had awarded fees for reasons other than unreasonable legal positions: one involved litigation misconduct, the other “overaggressive assertions of copyright” – a copyright holder that filed hundreds of suits on an overbroad legal theory, which led to fee awards even in the cases in which the litigant’s theory was reasonable. Worried that the district court in fact regarded reasonableness as a controlling factor, the opinion reverses the decision that denied fees to Kirtsaeng and remands the case for reconsideration.

To be sure, it is difficult to think that Kirtsaeng has won much of a victory here.  He did manage to get the Second Circuit’s decision vacated, but there is no reason to think that either of the factors that the Court identifies would justify a fee award for Kirtsaeng.  Thus, at bottom, there is not a word in the Supreme Court’s opinion that identifies any factor likely to justify fees for Kirtsaeng.  Indeed, the Court goes out of its way to comment that “we do not at all intimate that the District Court should reach a different conclusion.”  At most, I would say, Kirtsaeng’s counsel have won another opportunity to think creatively about new reasons for a fee award that seems almost as remote now as it did before the Supreme Court agreed to review the case.

PLAIN LANGUAGE: The Copyright Act provides that a court “may” award attorney’s fees to the party that wins a copyright suit.  In this case, a publisher (John Wiley) sued Kirtsaeng for infringement.  The case was a difficult one, and the Supreme Court eventually ruled for Kirtsaeng.  The lower courts said that Kirtsaeng could not recover fees because John Wiley’s lawsuit was reasonable.  The Supreme Court said that the lower courts were correct to consider whether the lawsuit was reasonable, but also that they needed to take a second look to consider if there was any other reason why Kirtsaeng might deserve fees.