For more than a half-century, the Supreme Court has spoken often of its commitment to the constitutional ideal that every citizen’s vote should count as much as every other’s, but it only now has tried to say just how that equality should be measured.  On Monday, it announced the result of that initial effort to define “one person, one vote”: the states mostly get to choose, but they don’t have to switch to a system that few of them have ever tried.

Justice Ruth Bader Ginsburg wrote the main opinion  in the much-anticipated case of Evenwel v. Abbott, and a hasty reading of it might suggest that the states must use one formula in drawing election maps:  take the total number of people in a state, and then divide up that total by the number of seats in the legislature or local governing bodies, with the answer dictating how many people (give or take a few) should be in each district. But that is not where the Court wound up. 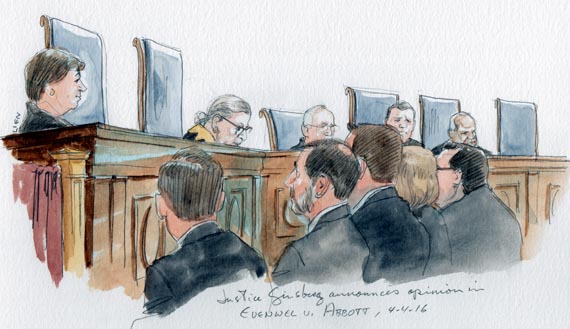 While virtually every argument used by the Ginsburg opinion in favor of basing representation on total population (because elected officials supposedly represent everybody and not just the voters) points toward a constitutional mandate, it turns out that the states actually are not bound by the Constitution to craft new election districts by starting with total population.   The only thing settled constitutionally now is that the states also are not required to divide up districts by using the voting population to be assigned to each, making them equal.  Should a state do it that way, the opinion seems to say, the Court will then face that issue.

The ruling’s bottom line was unanimous, but the main opinion bore many signs that its warm embrace of the theory of equality of representation had to be qualified by leaving the states with at least the appearance of the power of choice, to hold together six solid votes.

Two of the eight Justices were clearly not satisfied with the rhetoric and some of the implications of Justice Ginsburg’s opinion, and only joined in the outcome.  Those were Justices Samuel A. Alito, Jr., and Clarence Thomas, each of whom wrote separately.  Thomas also joined most of Alito’s opinion.

Had Justice Ginsburg not held five colleagues in support of what her opinion actually said in the end, two — perhaps Chief Justice John G. Roberts, Jr., and Justice Anthony M. Kennedy — might have abandoned the common result.  The result then might have been that the Court would have split four to four, settling nothing and releasing no opinion at all while leaving intact a three-judge federal district court’s ruling that Texas had the authority to base its state legislative seats on a division of the total population of Texas.

Justice Alito used his separate opinion to try to make it very clear — to legislatures and to lower courts — that the Court decision did, indeed, stop short of those added points.  He wrote: “Whether a state is permitted to use some measure other than total population is an important and sensitive question that we can consider if and when we have before us a state districting plan that, unlike the current Texas plan, uses something other than total population as the basis for equalizing the size of districts. . . .  For centuries, political theorists have debated the proper role of representatives, and political scientists have studied the conduct of legislators and the interests that they actually advance.”

Justice Thomas used his lengthy opinion to chastise the majority for even trying to figure out what “one person, one vote” should mean as a constitutional matter; in his view, the Court should leave such issues to the states to decide.   Under the Constitution, he wrote, a state “can use total population, eligible voters, or any other nondiscriminatory voter base.”

Joining in the Ginsburg opinion, and offering no separate views, were the Chief Justice and Justices Kennedy, Stephen G. Breyer, Elena Kagan, and Sonia Sotomayor.

The main opinion relied on the history of the Constitution and the time of the founding and since, the history of the Fourteenth Amendment when it was added in 1866 and since, prior Supreme Court precedents since the 1964 declaration of the “one person, one vote” ideal, and the practice among the states in their redistricting actions.

At issue in the case was only the metric that legislatures should or could use in drawing up new election districts for state legislatures and county- and city-elected governing entities.  The two voters, backed by a host of conservative political and legal advocacy groups, had not challenged the use of total population as the basis for drawing up new districts for members of the U.S. House of Representatives.  The Constitution itself dictates that House districts be based on divisions of total state population.

The Evenwel case had drawn a great deal of attention beyond those interested in the Constitution and in political theory: if the Court had opted to require states to use voter population as the basis for redistricting, that would have had the real-world political effect of favoring Republican candidates.    That is because voters tend to register and actually vote more often in districts that favor Republicans, compared to urban areas that favor Democrats and in which more individuals not eligible to vote — for example, children, prison inmates, ex-convicts, and immigrants who are not U.S. citizens – reside.