Argument analysis: Search for a fifth vote on immigration

No matter which way the Supreme Court turns on President Barack Obama’s ambitious move to overhaul immigration policy, it can get to a result only if a fifth vote can be found to make a majority among the eight Justices.  That, at least, seemed likely after a ninety-minute argument on Monday in United States v. Texas, the fiercely contested courthouse battle between the White House and Congress over who among eleven-or-so million immigrants can stay in the country without a specific legal right to do so.

The Court’s four liberal members were working extra hard to make the central issue whether state governments can even be in court to challenge how the government enforces immigration laws — a thrust that encountered some significant resistance from a few others on the bench.  It may have been that the strength of their efforts arose out of a fear that they could not win on the legality of the policy itself, but a realization that the conservatives also are not likely to hold the votes needed to prevail on the merits.

At repeated points during the argument, it appeared that the Obama administration might actually be able to salvage its policy as both legal and enforceable (if the lawsuit were allowed to go forward) by simply deleting from the regulations in dispute a two-word phrase: “lawful presence.”  It was very clear during the challengers’ argument — by lawyers for the twenty-six states and for the U.S. House of Representatives — that the phrase carries enormous meaning for them, that they see it as the equivalent of a whole new immigration law enacted by the White House, not Congress.

At one point, Justice Anthony M. Kennedy, who could wind up holding a decisive vote, appeared to hint that he agreed that this is what happened, that in this instance, the normal order of government policymaking had been turned “upside down,” as he put it.

The Obama administration’s lawyer sought to defuse that complaint by telling the Court, in response to several questions about the phrase, that it stands for nothing whatsoever, and could simply be deleted without affecting the policy in any way.  But, if that is the solution, would it be enough to generate five votes in favor of the policy?  It was hard to envision that on Monday, making more sense of the heavy focus on the states’ right to sue in the first place.  If the states were constitutionally barred from suing, the case would be over — period.

A federal judge in Texas and the U.S. Court of Appeals for the Fifth Circuit allowed the states’ challenge to go forward on the theory that at least one of the states — Texas — would suffer a significant budget impact if it were faced with handing out drivers’ licenses to perhaps millions of undocumented immigrants, if they gained the right to stay in the United States.  That impact, the lower courts said, was what gave Texas the right to sue on behalf of itself and twenty-five sister states.

At Monday’s arguments, a series of rapid-fire questions by Justices Stephen G. Breyer, Ruth Bader Ginsburg, Elena Kagan, and Sonia Sotomayor highlighted the potentially decisive significance of the constitutional question about when state governments may sue the federal government because of a disagreement over federal policy.  That is a question under the Constitution’s Article III, which limits federal courts’ authority to deciding live legal controversies, those in which someone can claim to have been specifically harmed by government action.

Breyer trotted out prior Supreme Court precedents on Article III “standing” to make the point, and his three liberal colleagues had an array of objections to the states’ right to sue to block the Obama policy announced seventeen months ago, but not yet in effect because of lower court temporary orders against enforcement. 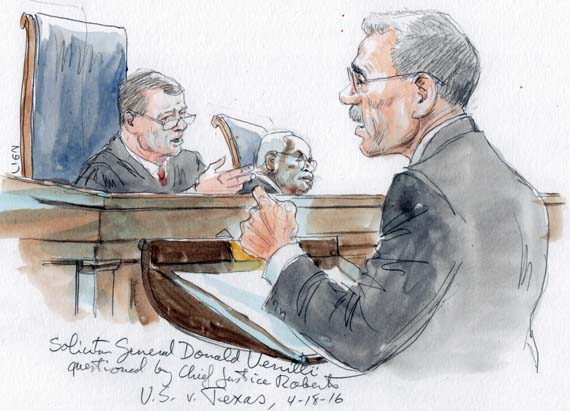 Chief Justice John G. Roberts, Jr., and Justice Samuel A. Alito, Jr., were aggressive questioners of the administration lawyer, Solicitor General Donald B. Verrilli, Jr., on the “standing” question.  Both seemed to have come into the argument inclined to accept that Texas and the other states did have enough at stake that they should have the right to take their grievance to court. But there did not appear to be support for that from any of their colleagues; Kennedy was not noticeably favorable to the states on that point; Justice Clarence Thomas said nothing during the argument. 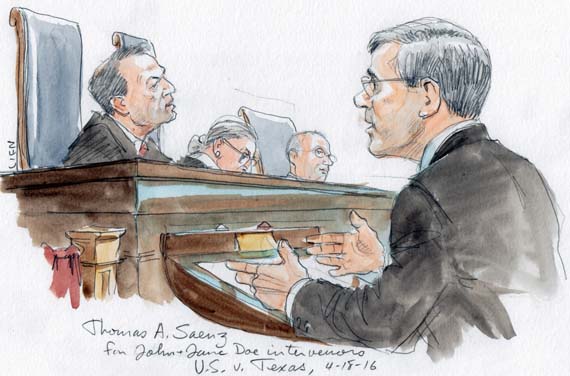 Thomas A. Saenz for intervenor-repondents in support of petitioners (Art Lien)

The Chief Justice and Justice Alito used up much of the ten minutes allowed for a lawyer representing undocumented parents who could benefit from the Obama policy, with most of their questions on the “standing” issue.  Thomas A. Saenz of the Mexican American Legal Defense and Educational Fund had little opportunity to talk about the merits of the policy.

Scott A. Keller, the Texas state solicitor general arguing here for all of the twenty-six states, had much of his time at the lectern absorbed in exchanges with the Justices pressing their point against the right to sue, and those exchanges were seldom interrupted by any of the other Justices.  The Chief Justice, in particular, avoiding questioning Keller about the “standing” issue. 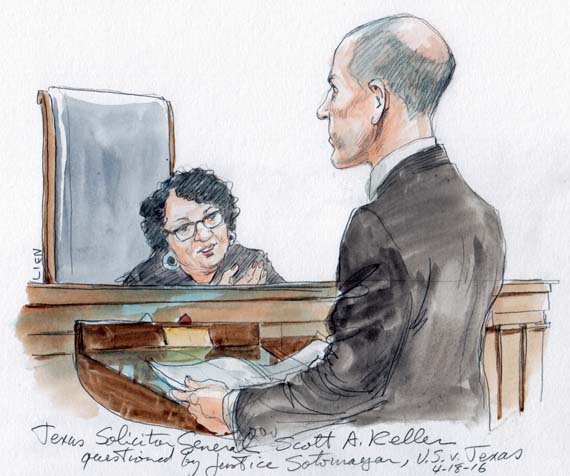 When Keller had a chance to make the points he wanted to stress, he sought to keep the Court focused on the states’ argument that the Obama policy was not just a discretionary use of authority to allow some undocumented immigrants to prolong their stay in the United States.  The policy, he insisted, installed — without a word of approval from Congress, and actually in defiance of the immigration laws Congress already has passed — a brand new legal status, “legal presence.”  It may not be a path to citizenship, Keller suggested, but it was a path to opportunity in this country — a privilege that, he said, only Congress can confer.

The House of Representatives sent a young, and sometimes brash Washington lawyer, Erin E. Murphy, to make many of the same points that Texas had offered.  She, too, insisted that the phrase “lawful presence” meant the same thing as a congressionally conferred legal status for people who otherwise would be in line to be deported. 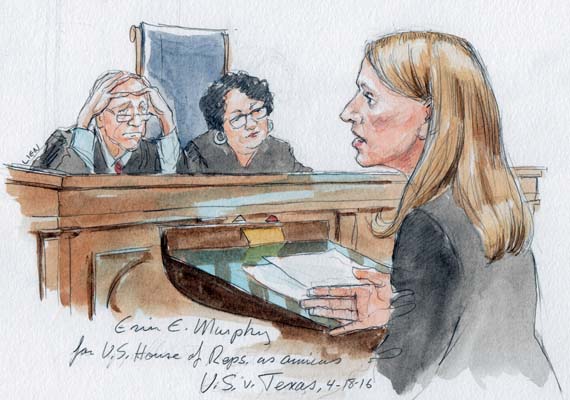 That might turn out to have been a risky strategy: if the Court was able to put together a majority that would conclude that, since the phrase could be so readily cast aside by the government, did it actually mean what the states and the House feared that it did?