Monday morning was IP day at the Supreme Court. The double bill began with a case about attorney’s fee awards in copyright cases (Kirtsaeng v. John Wiley & Sons) and continued with a case about standards for invalidating patents (Cuozzo Speed Technologies v. Lee).

Kirtsaeng is the latest in a series of cases in which the Justices have considered vague statutes that give district courts discretion to award enhanced relief in intellectual property cases.  The particular statute here, Section 505 of the Copyright Act, provides that a trial “court may . . . award a reasonable attorney’s fee to the prevailing party.”  In this case, the lower courts refused to award defendant Supap Kirtsaeng fees, even though he successfully repulsed the efforts of publisher John Wiley to sue him for copyright infringement.  Both of the lower courts justified their denial of attorney’s fees by pointing out how reasonable the publisher’s suit had been: the particular legal question was sufficiently difficult to make it to the Supreme Court, where three Justices agreed with the publisher on the merits.

The question before the Justices yesterday was whether it fairly implements a statute that offers so little guidance to erect a general rule that ordinarily bars the imposition of fees if the losing party’s position was reasonable.  Kirtsaeng argues that the rule improperly elevates one single factor in a statute that should permit a much more generalized consideration of whether a fee award furthers the purposes of the Copyright Act.  Framed in those terms, the Justices expressed little sympathy for Kirtsaeng’s position, criticizing it in turn as either unduly vague or insufficiently predictable.  The comments of Justice Samuel Alito are illustrative: “That’s an awfully hard task for district judges to perform – ‘what will further the purposes of the Copyright Act’ or ‘what is the most faithful to the Copyright Act.’  District judges are going to see that very differently, and there won’t be any consistency if that’s what they are required to do or authorized to do.” 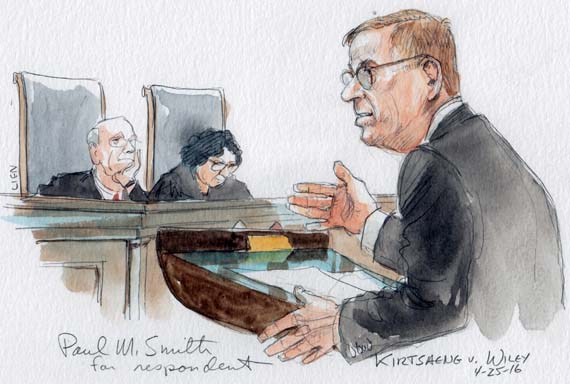 But at the same time the Justices weren’t immediately taken with John Wiley’s argument that the reasonableness of the loser’s position should almost always preclude a fee award.  The biggest problem here was a practical one.  The briefs and oral arguments included a lot of case counting – Justice Sonia Sotomayor recounted the results she apparently obtained from the Supreme Court’s own librarians.  Several Justices plainly were concerned that the “reasonableness” rule under examination turns out to be a strongly pro-plaintiff rule: winning plaintiffs often get fees under that rule, but winning defendants almost never get fees.  The topic consumed a lot of the Court’s attention; several of the Justices seemed reluctant to accept a rule that turns out not to be evenhanded.  The concern seemed to dissipate when Assistant to the Solicitor General Elaine Goldenberg (appearing on behalf of the federal government) attributed the apparent disparity between plaintiff-side fee awards and defendant-side fee awards to default judgments, which almost always involve plaintiff victories in small-dollar cases.

So it wouldn’t be fair to suggest that the Justices presented a united front on one side of the case or the other.  For me, the most telling points in the argument involved the “David and Goliath” narrative that Joshua Rosenkranz (counsel for Kirtsaeng) presented: seeking fees to compensate for the uphill battle his individual client incurred resisting the suit of the huge defendant publisher John Wiley.  Justice Elena Kagan in particular worried that the rule that Kirtsaeng seeks would end up harming the small defendants of the world because it would raise the stakes if they persisted in litigation to defend themselves.  I suggested in my preview that I was particularly impressed by an amicus brief filed on behalf of Volunteer Lawyers for the Arts (VLA).  The oral argument included a good bit of discussion about “starving artists,” and the Justices seemed to have taken to heart the argument from the VLA amicus brief that making it easier to award fees against prevailing parties would make it even harder for volunteers to provide pro bono services to the “starving artists” of the world. 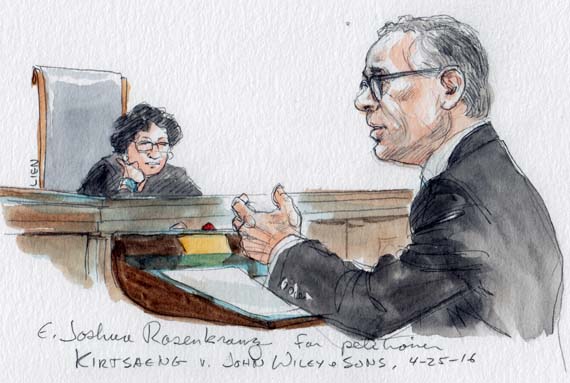 So in the end I think it is pretty unlikely the Justices will go so far as to accept the “purposes of the Copyright Act” standard pressed by Kirtsaeng.  To be sure, the statute is so vague that it would be easy for the Justices to vacate the court of appeals opinion and remand for further consideration even without accepting the standard that Kirtsaeng presses.  So Kirtsaeng might win yet another stage in this battle.  But even if the Court rejects the work of the court of appeals as unduly wooden, I don’t see the Court going so far as to adopt the broad and amorphous standard that seems necessary for Kirtsaeng ultimately to recover a fee award.