Caught between a mountain of debt, impatient bond investors, a major setback in a federal appeals court, and a so-far passive Congress, the commonwealth of Puerto Rico turns to the Supreme Court next week, seeking a legal right to restructure what it owes to creditors.  Puerto Rico does have the Obama administration on its side, but government officials have not yet persuaded Congress to pass any debt-rescue plan.

Next Tuesday, March 22, at 11 a.m., a seven-member Court will hear one hour of oral argument on the combined cases of Puerto Rico v. Franklin California Tax-Free Trust and Acosta-Febo v. Franklin California Tax-Free Trust.  Justice Samuel A. Alito, Jr., is not taking part, presumably because of some of his investments, and the late Justice Antonin Scalia’s seat remains vacant.

This is the second case the Court will hear this Term that tests, at a fundamental level, how much authority the island of more than 3.5 million people has to manage its own governmental affairs.  (The other case, on the island’s power to prosecute criminal cases, was heard by the Justices on January 13 — Puerto Rico v. Sanchez-Villa.  No decision has been issued yet.)  And lurking just beneath the surface of both cases is the broader question of whether it is unconstitutional to treat Puerto Rico differently than the fifty state governments on the mainland and in Alaska and Hawaii. 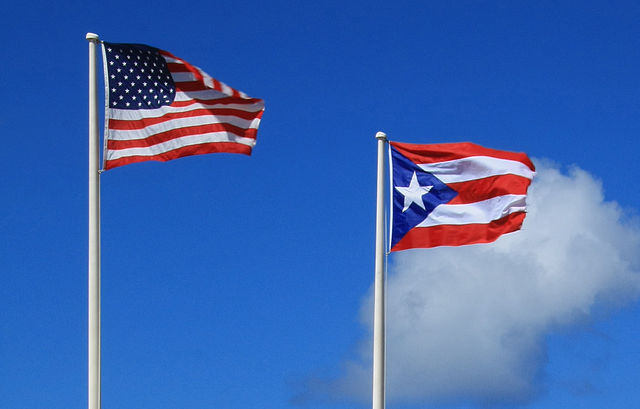 The cases coming up next week revolve around changes that Congress made in 1984, when it revised the federal bankruptcy code.  It took away from the local government subdivisions of Puerto Rico — the agencies that provide electricity, water, and highways — a previously existing legal right to file for federal bankruptcy protection.  That right, under the code’s Chapter 9, is retained in the fifty state governments, and the city of Detroit is an example of a local entity that took advantage of that option.

Two years ago, Puerto Rico’s legislature decided to act on its own, and passed a debt-recovery law that would provide alternative ways for the local utilities to rearrange their debt in ways that would allow them to keep operating.  The law also would attempt to protect — at least in part — the rights of those who had invested in utility bonds.  But the day the island’s governor signed that measure into law, a group of investors in bonds issued by the electric utility, dissatisfied with the terms of the act, filed a series of lawsuits, contending that the bill conflicted directly with a technical provision (part of Chapter 9) that limits how local government agencies can deal with creditors.

A federal judge in Puerto Rico and the U.S. Court of Appeals for the First Circuit — the federal court that handles appeals from the island — ruled that the 2014 recovery law conflicts with the bankruptcy law, was “preempted” by that law, and thus could not be enforced.  (A dissenting judge on the First Circuit panel argued that this amounted to different treatment of Puerto Rico, compared to the states, and thus violated the Constitution’s guarantee of equality for Puerto Rico.  It is unclear whether the Supreme Court will need to, or would choose to, reach that constitutional question.)

The appeals court ruling prompted commonwealth officials, and its Government Development Bank, to take the dispute on to the Supreme Court, in separate appeals.  The petitions raised the same question: Since Chapter 9 of the bankruptcy code does not even apply to Puerto Rico, does it nevertheless bar Puerto Rico from passing its own law to restructure the debts of its public utilities?  The two petitions said that, excluded from Chapter 9 and yet barred from passing its own law, the island was left in a “no man’s land,” with its only remaining option to persuade Congress to put it back under Chapter 9.

Puerto Rico’s representative in the U.S. House of Representatives has regularly introduced bills to give it Chapter 9 protection, and the Obama administration has sent Congress a broad report recommending a new structure for modifying the debts of territories, under strong federal oversight.  While hearings have been held (but only for a general exploration of Puerto Rico’s debt crisis), and the new Speaker of the House, Wisconsin Republican Rep. Paul Ryan, has promised to take up such proposals this session, nothing firm is scheduled yet.

The Court, in the meantime, will go ahead with its review on the premise that there is as yet no new law to aid the commonwealth.  If Congress were to adopt the Chapter 9 approach during this year’s session, that presumably would make the Supreme Court case moot (legally without significance), and it likely would be dismissed.  The Court does have a simple way to decide the case in Puerto Rico’s favor: interpret the language excluding the commonwealth from Chapter 9 to have no impact on its financial affairs, thus letting the legislature’s 2014 recovery act go into effect.

But it is being urged, strongly, by the bond investors to uphold the First Circuit’s ruling against the restructuring law.  The investing funds have argued that the provision limiting how local governments may deal with creditors is a stand-alone provision, and applies as fully to those not covered generally by Chapter 9 and to those who are covered.  Congress knew what it was doing, and Puerto Rico, the funds have contended, is inventing an interpretation that reduces the limitation to a mere proviso to a provision.

Although the focus of these cases is primarily upon the more than $20 billion in debt owed by Puerto Rico’s public utilities, and on the specifics of federal bankruptcy law as it applies to the commonwealth, the island’s officials have told the Court that the outcome of the case will have a sweeping impact across the nation, because there are pension funds that have invested in the utilities’ bonds and those funds will be affected directly.