Argument analysis: Counting to four, not five, on RICO extraterritoriality

Nearly sixteen years after it was first filed, the legal battle between the European Union and U.S. tobacco giant RJR Nabisco came to the Supreme Court today.  The EU contends that RJR played a central role in an international money-laundering scheme and seeks to hold it responsible under the Racketeer Influenced and Corrupt Organizations Act, a 1970 law intended to fight organized crime.  The issue before the Court today was whether the law, popularly known as RICO, applies outside the United States and – if so – to what extent.  After an hour of oral arguments, it was hard to make predictions with any real confidence about how the case might turn out.  That said, however, it’s hard to see where the EU can get the four votes – Justice Sonia Sotomayor was recused, leaving the Court with only seven Justices – needed to prevail.

At least two Justices seemed to agree with the EU and the United States (which filed a “friend of the Court” brief) that RICO can apply extraterritorially when the predicate acts occur abroad.  Justice Ruth Bader Ginsburg, for example, asked attorney Gregory Katsas – representing RJR – whether RICO would apply to a foreign terrorist organization that operated abroad but repeatedly engaged in very violent acts against U.S. citizens.  Katsas held firm, telling Ginsburg that the U.S. could prosecute the terrorists for their criminal acts, but RICO would not apply because the terrorist group was a foreign enterprise.  But Ginsburg was unconvinced, asking Katsas skeptically whether, under his interpretation of RICO, a New York mob could be prosecuted under RICO for committing crimes in the U.S. but a Sicilian mob that commits the same crimes could not be. 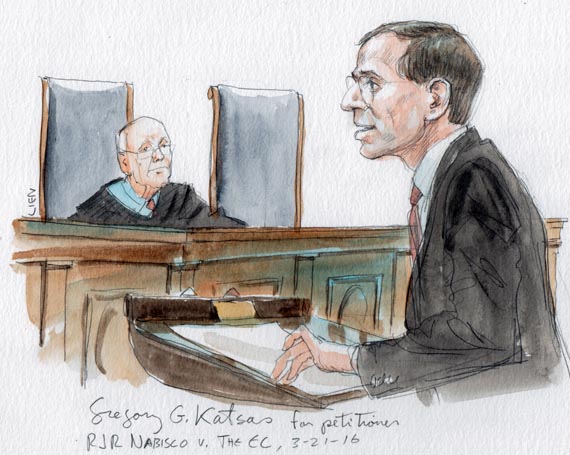 Similarly, when Katsas emphasized that RICO reflects Congress’s “repeated and specific and exclusive focus on the domestic effects of racketeering,” with no sign that it intended the law to apply outside the United States, Justice Elena Kagan acknowledged that “that may have been true, or largely true,” when Congress first enacted RICO.  But after September 11, she continued, Congress amended RICO to add terrorism-related predicate acts.  “Don’t you think that what was in Congress’s heads at that moment in time was foreign terrorist organizations committing terrorist conduct on foreign soil?”

But other Justices were more sympathetic to RJR.  Arguing on behalf of the United States, Assistant to the Solicitor General Elaine Goldenberg emphasized that, although the federal government could prosecute the predicate acts that apply extraterritorially, Congress thought it was important to have a more powerful tool to “root out” patterns of crimes. Chief Justice John Roberts countered that giving the government such a tool could cause international friction by infringing on other countries’ sovereignty.

And Justice Samuel Alito twice expressed bewilderment that the EU’s lawsuit was even in U.S. courts.  Why don’t they just sue at home, Alito asked David Frederick, representing the EU.  Frederick explained that, because the EU and its member states would have to come to the United States to enforce the judgment even if they filed a lawsuit elsewhere, the “simplest thing to do is a one-step process” – that is, to sue in the U.S. in the first place.

But the Justices also grappled with a second issue, one that could derail the EU’s lawsuit even if it can convince at least four Justices that, as a general rule, RICO may apply to conduct outside the U.S.  Section 1964(c) of RICO allows private civil lawsuits that, if successful, can result in awards to plaintiffs of up to three times their actual damages; the United States and RJR contend that this private remedy is only available, however, if a plaintiff can prove a domestic injury.  The U.S.’s support for these theory is not surprising, because it would still allow the government to prosecute cases even if private parties could not sue.  Katsas emphasized today that the Supreme Court’s cases in the past few decades have “made clear that the decision to prohibit certain underlying conduct is fundamentally different from the decision to provide a private right of action for violation of substantive law”; we cannot, he continued, “automatically assume that because Congress criminalized the conduct, it intended for the private right of action to follow along to the same extent.”

Justice Stephen Breyer objected to that reasoning.  One predicate act, he noted, makes it a crime to commit acts of violence at an international airport outside the United States.  Why would Congress include this crime as a predicate act, he asked, unless it wanted the victim of that crime to receive damages under RICO?

And Justice Elena Kagan expressed skepticism about the government and RJR’s proposed rule.  She told Goldenberg that, although she understood the concern for other countries’ sovereignty, once the presumption that a law does not apply outside the United States has been rebutted, “drawing the line” to allow private lawsuits for domestic injuries but not foreign ones “seems very policy-ish.” What’s the legal principle, she asked, behind limiting Section 1964(c) to domestic injury?

Alito proved to be a more receptive audience, observing that nothing in Section 1964(c) suggested that Congress intended for it to apply outside the United States.  Frederick stressed that, in Section 1964(c), Congress was tracking the language of the Clayton Antitrust Act, which the Court had already interpreted as having extraterritorial effect. Alito responded that, at that time, RICO was only regarded as a domestic statute.  Perhaps more troublingly, Breyer – who generally had seemed to side with the EU – observed that the Clayton Act has been “a nightmare” for foreign countries.

Even if the EU can get the support of the three more liberal Justices who participated, they would still need to pick up at least one more vote.  With Roberts and Alito leaning toward RJR, that leaves Justices Anthony Kennedy – who only asked a few questions, without really tipping his hand – and Justice Clarence Thomas, who did not ask any at all.  It may not be an impossible task, but given the Court’s recent antipathy to applying U.S. law overseas, it could be a difficult one.