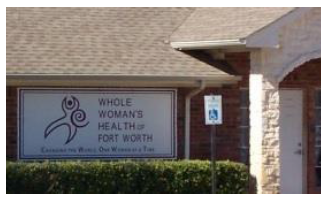 UPDATED 5:44 p.m.   In a matter of days, the Court will get a test of its current views on one of the restrictions at issue in the Texas abortion case previewed in this post: the requirement that doctors at abortion clinics have patient-admitting privileges at a hospital within thirty miles of the clinic.  On Wednesday, the U.S. Court of Appeals for the Fifth Circuit — the same court whose rulings are at issue in this post — blocked a federal judge’s order finding a similar provision in Louisiana to be unconstitutional; the judge had barred enforcement of the privileges requirement.  Lawyers for clinics and doctors in Louisiana immediately said they would ask the Supreme Court to lift the Fifth Circuit’s stay order, and put the district judge’s order back into effect.  It should be noted that, in November 2013, the Supreme Court split five to four in an earlier stage of the Texas case and allowed the admitting privileges requirement at issue in that case to take effect.  Justice Kennedy was in the majority in that order. The new request by the abortion providers will be the first abortion issue to reach the Court with only eight members.

After nine years of having only a limited role in the always heated controversy over abortion rights, the Supreme Court next week moves back into the center, facing again a fundamental question that has not changed much since Roe v. Wade: will women and their doctors have the basic choice about ending a pregnancy?  The Court has kept that choice more or less intact in the forty-three years since Roe, but it now confronts the issue of giving state legislatures a significantly larger role in determining what women’s health requires.

On Wednesday, March 2, the Court will hold a one-hour hearing on Whole Woman’s Health v. Hellerstedt, and on the outcome of that case depends the near-term fate of a new emphasis in the anti-abortion movement on the health of women, as intense as has been its long effort to protect the life of the fetus from the moment of conception to live birth.

This time, the Court will be dealing with a law in Texas that is like scores of others enacted in states across the country in recent years: more restrictions on the actual operation of abortion clinics, with the usual — and intended — effect of reducing access to pregnancy termination services.  That is an approach that potentially could have a greater chance of succeeding in the Court than the other tactic that has been thwarted repeatedly by the Justices: narrowing abortion rights directly by banning the procedure earlier and earlier in pregnancy.

Most recently, the Court turned down an attempt to ban the procedure as early as six weeks in pregnancy, refusing to reconsider the four-decade-old principle that abortion may not be banned altogether until after the fetus has developed to the point of surviving if born alive — somewhere around twenty-six or twenty-eight weeks of pregnancy.

The Texas case provides almost a textbook example of challenging abortion by new regulations of clinic procedures.  Before the Texas legislature adopted two new restrictions three years ago, there were forty-one clinics performing abortions in the state.  As a result of partial enforcement of the new law, that number has dropped to nineteen, and clinic operators have argued that the total number may drop to ten, statewide, if the Court were to uphold the law.

One of the two provisions at issue would require an abortion clinic to be outfitted with the physical and professional facilities equal to a surgical center, even if it mainly performs abortions by the use of drugs rather than surgery.  That provision has been blocked statewide by a temporary Supreme Court order.  If it were upheld, that requirement would allow only clinics located in Texas’s largest cities to serve the estimated 60,000 women in the state who seek abortions each year, the clinics have asserted.

The other provision would require any doctor who performed abortions in a clinic to have the professional privilege of admitting patients to a full-scale hospital within thirty miles of the clinic, in case of medical emergencies.  That part of the law is in effect in most of the state, under earlier, temporary orders by lower courts and the Supreme Court, and it has had the effect of shutting down about half of the clinics existing in 2003.

Whatever the current state of the two provisions, the constitutionality of each is directly before the Court now, for new review.  The review, of course, will be done by an eight-member Court because of the death of Justice Antonin Scalia — who regularly voted to uphold abortion limitations.  He, along with three other Justices, cast dissenting votes last June when the Court temporarily blocked a federal appeals court decision upholding almost all of the Texas law.

It is widely assumed that, with an eight-member Court, the deciding vote that would avoid a four-to-four split would likely be cast by Justice Anthony M. Kennedy.  Going into the new Texas case, each side in the controversy has some reason to hope to attract Kennedy’s vote.

For abortion foes, the positive indicators are that Kennedy wrote the last major decision on abortion: the 2007 decision in Gonzales v. Carhart, upholding a federal ban on terminating the life of a fetus after it had partially emerged from a woman’s body.  Also, in that decision, he accepted scientific arguments that many women do come to regret having had abortions, and thus the procedure may cause psychological harm.

For abortion supporters, the positive indicators are that Kennedy was one of three Justices who mostly rescued Roe v. Wade’s basic principles in the 1992 decision in Planned Parenthood of Southeastern Pennsylvania v. Casey.  Also, Kennedy was in the five-Justice majority that blocked much of the Texas law in a temporary order last June, and he presumably joined in the Court’s recent refusal to reopen the question of state power to ban abortions before a fetus could be considered viable outside the woman’s body.

Chief Justice John G. Roberts, Jr., and Justices Samuel A. Alito, Jr., and Clarence Thomas (along with Scalia) dissented from the temporary order against enforcing much of the Texas law.  The majority then included Kennedy and Justices Stephen G. Breyer, Ruth Bader Ginsburg, Elena Kagan, and Sonia Sotomayor.  That order did not provide an explanation for the postponement of the law’s enforcement.

The Texas case reached the Court in an appeal by four abortion clinics in Texas — led by Whole Woman’s Health, which operates clinics in Fort Worth and San Antonio — and three doctors who perform abortions in the state.

After the U.S. Court of Appeals for the Fifth Circuit upheld almost all parts of the 2013 law, the clinics and doctors asked the Supreme Court to rule on two questions.  First, they argued that the Fifth Circuit was wrong in applying the “undue burden” standard — the judicial measure for abortion restrictions that resulted from the Casey decision — in concluding that a court should not second-guess a state legislature’s view that a restriction was necessary to protect women’s health and in concluding that an anti-abortion law may be enforced even if it resulted in significant reduction of access to abortion in a state.

Second, the petition asked whether the Fifth Circuit was wrong, in a second round of litigation over the Texas law, in ruling that its earlier decision in favor of the law barred the clinics and doctors from raising in the second round the argument that both restrictions in the 2013 law were unconstitutional as written.  In the second round, the Fifth Circuit ruled that the two restrictions were not invalid in their practical application to actual clinic operations.

The federal government has joined in the case in full support of the clinics and doctors.

Texas largely defends the 2013 law with the argument that it follows two key points that it says were clarified by the Casey decision: that legislatures have wide discretion to pass laws in areas in which there is medical or scientific uncertainty, and that the “undue burden” standard of review of abortion restrictions focused only on whether it imposes a substantial obstacle to access to abortion, and does not require a weighing of the medical reasons the legislature had in mind balanced against the nature of any burden.

The case has attracted forty-seven amicus briefs in support of the clinics and doctors and thirty-three backing Texas’s arguments.

When the case reached the Court, it has the title Whole Woman’s Health v. Cole. It has since changed because of a new appointee to the state office of commissioner of health, John Hellerstedt.

On Wednesday, the clinics and doctors will be represented by Stephanie Toti, a lawyer for the Center for Reproductive Rights in New York City, with twenty minutes of time.  U.S. Solicitor General Donald B. Verrilli, Jr., will argue for the federal government in support of the clinics and doctors, with ten minutes.  Texas will be represented by its solicitor general, Scott A. Keller, with thirty minutes.