In Tuesday’s argument in Heffernan v. City of Paterson, the Justices considered a case that Justice Samuel Alito called a law school hypothetical — whether a public employee can show a violation of his right to political association when he was demoted explicitly because his employer believed he was holding a campaign sign as a show of support for the challenger in the mayoral race, even when the employee was not expressing support and had taken no position in the election. This question required the Justices to tangle with core questions of what the First Amendment does in the public-employment context. Does it create a right not to be subject to a test of political affiliation? Is there a meaningful difference between political neutrality and political agnosticism? Does it protect only those people who actively engage in expressive or associational activity? Or does it protect all people against government decisions made with an improper motive of suppressing disfavored political beliefs?

The dispute was captured by the city’s counsel, Thomas C. Goldstein, who said, “[i]t’s called an individual right, not a government wrong.” The case turns on what the Court does with that distinction. 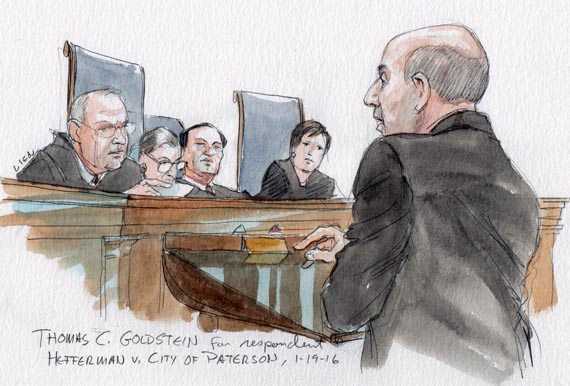 Arguing for Jeffrey Heffernan, Mark Frost of Philadelphia immediately encountered skeptical questioning from Chief Justice John Roberts and Justices Antonin Scalia, Anthony Kennedy, and Alito. Kennedy wanted to know the nature and source of the right being asserted, while Scalia insisted that there is “no constitutional right not to be fired for the wrong reason.” Roberts, Scalia, and Alito took turns pointing out that Heffernan was not associating with anyone by holding the campaign sign; his First Amendment rights could not be abridged because he was not exercising those rights. Frost responded that the inquiry must be into the government’s motive and the government’s analysis in making its employment decision — whether its “motive is to suppress one’s beliefs and associations or nonassociations.” There followed a somewhat confused exchange in which Roberts and Alito inquired into the availability and scope of any state-law remedies, suggesting that any remedy should come from state law rather than the federal Constitution; Frost largely responded that the availability of state remedies should not diminish Heffernan’s First Amendment rights or his right to assert a federal constitutional claim in federal court. Justice Ruth Bader Ginsburg threw Frost a line at the end of his argument, asking whether Heffernan was demoted “because he gave the appearance of exercising his First Amendment rights”; Frost agreed that the city perceived Heffernan as exercising his rights and it “should make no difference with respect to the motivation outcome of what took place.” 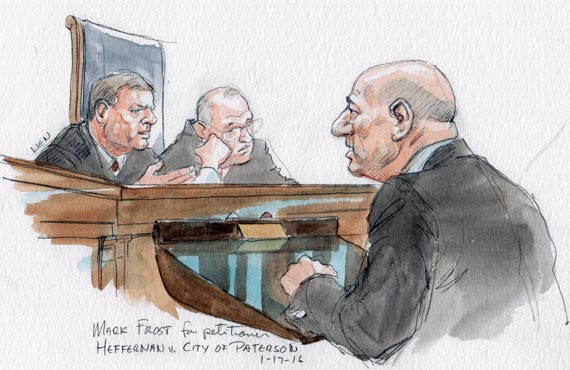 Arguing for the United States as amicus curiae supporting Heffernan, Assistant to the Solicitor General Ginger D. Anders responded to Kennedy’s question about the precise right at issue, defining it as “a First Amendment right not to have adverse action taken against him by his employer for the unconstitutional purpose of suppressing disfavored political beliefs.” Anders agreed with Kennedy’s elaboration that there is a right “to be secure from government oversight of your beliefs.” When Scalia wondered where that could be found in the First Amendment, Anders refined it as a right not to be subject to a test of political affiliation when it is not a reasonable job requirement. The right at issue was not, she told Roberts, merely a right to be free from “arbitrary employment action based on a mistake,” but a right to be free from demotion for an improper purpose based on the government’s (erroneous) perception that Heffernan was engaging in protected First Amendment activity. Anders insisted this is a “narrow corollary” to recognized constitutional limitations on patronage employment decisions; when the employer acts with the same intent to take adverse action because of political affiliation, it “shouldn’t get a free pass simply because . . . it’s ill-motivated and wrong.” Anders also addressed floodgates concerns in response to Scalia’s questions, pointing out that courts have not been inundated with meritless claims based on mistaken perception (such as of pregnancy or disability) under various federal statutes.

For the city, Goldstein’s argument relied on a series of distinctions. The first was between political neutrality, in which an employee makes a conscious choice not to take a political position, and political obliviousness (or apathy or agnosticism), in which an employee does not care about the political dispute; the First Amendment protects employees from adverse actions based on the former, but not based on the latter. The second was between one-off individualized employment decisions and sweeping, overbroad employment policies, with broad policies subject to greater constitutional scrutiny.

Goldstein’s questions came primarily from Ginsburg and Justice Elena Kagan. Ginsburg questioned whether the “thrust” of the First Amendment is to limit government, while Kagan offered that a “fundamental tenet” of the First Amendment is concern that government is doing things for impermissible reasons, seeking to “create a world of speech in which everybody agrees with it and nobody opposes it.” Goldstein responded that improper motive is an “important thread,” one treated as a necessary but not sufficient condition. Kagan expressed doubt that political apathy reflected a meaningful line. If the “whole point” of the First Amendment is to prevent government from punishing a person who does not share the government’s views, it should not have less power to punish the person actively opposed to those views as opposed to the person who could not care less; treating them differently created “one strange doctrine.” After conceding that he “may not have persuaded [Kagan] in this case,” Goldstein concluded that many protections besides the First Amendment remain in place for the apathetic person.

Kennedy appeared to be the uncertain vote in this case, twice expressing doubts about the logic of the city’s position. He first expressed surprise at the suggestion that “the citizens of the United States . . . have no interest in making sure the government doesn’t evaluate everything they do from a political standpoint.” He later asked whether Goldstein wanted “this Court to hold that the government of the United States has a right to ascribe to a citizen views that he or she does not hold.” Goldstein insisted that neither would constitute a First Amendment violation. And although the individual employee has such an interest, it is overcome by local government’s need to manage its offices.

Frost took a brief rebuttal to insist that there was “little difference” between being neutral and being agnostic, for the simple reason that government is acting for an impermissible purpose in either situation.

[Disclosure: Goldstein & Russell, P.C., whose attorneys contribute to this blog in various capacities, is among the counsel to the respondents in this case. The author of this post, however, is not affiliated with the law firm.]