The longer the argument in Bank Markazi v. Peterson went on in the Supreme Court on Wednesday, the more it seemed that Congress had crept across the street that separates the two branches and set itself up with veto power over the Justices and, indeed, over all of the federal courts.  The hint of legislative supremacy actually got to the point that Chief Justice John G. Roberts, Jr., would say, with some exasperation, that “when there’s a dispute under one of the laws they pass, that’s our job” to decide it. 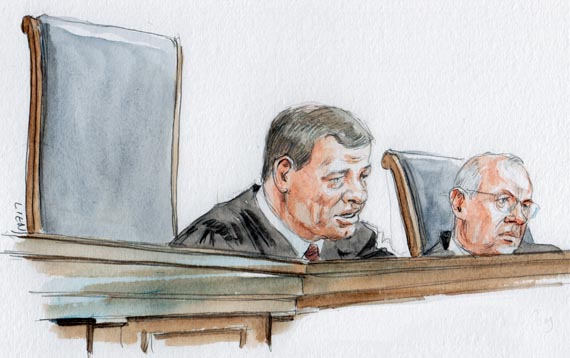 The case had started out with many of the Justices skeptical that Congress had gone too far in ordering a federal court to find a way to hand over nearly $2 billion in security assets belonging to Iran’s central bank to victims (and their families) of Middle East terrorist acts blamed on Iran.  But the tone and content of the argument shifted dramatically with expansive claims of Congress’s power by lawyers for the victims and for the federal government.

This is a case that goes to the heart of the constitutional idea that the branches of the federal government operate in separate spheres, more or less insulated from intrusions by the others.  But, in the more intense exchanges on Wednesday, it seemed clear that the line which is supposed to keep Congress on its side of the street was uncomfortably close to the Justices’ side of the street — and maybe Congress had actually crossed that line in this case.

Congress has not often tried to actually tell the courts how to decide a specific case, and the central bank’s lawyer, Washington, D.C., attorney Jeffrey A. Lamken, insisted that, over the course of two centuries, the lawmakers had never gone as far as they did in this case.  They singled out a particular case, by name and court docket number, pointed to the specific assets at issue, made very clear that they wanted the assets shifted to the victims, and chose language for the law that would govern absolutely no other lawsuit.  That, he said over and over again, “crosses the line” into the courts’ domain. 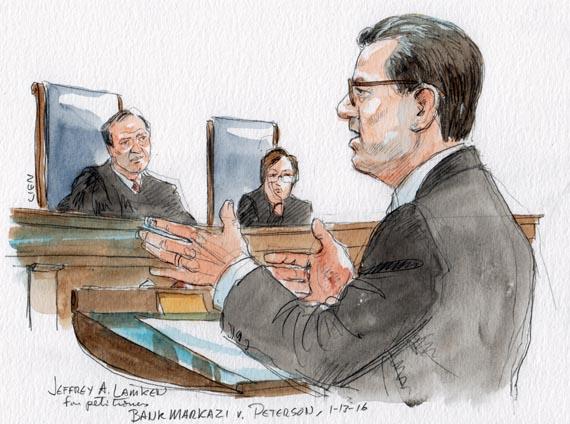 At the outset, as the Justices tried to bear down on the specifics of this dispute, they wondered whether Lamken was exaggerating the isolated nature of the case and the specific law, and whether the courts perhaps should not step on the toes of Congress and the president as they pursued sensitive diplomatic dealings with Iran.  For example, Justice Antonin Scalia asked why Congress could only use its legislative powers generally, and not to deal with specific cases.  And Justice Elena Kagan remarked: “Our cases are pretty clear that the political branches have a great deal of power even as to particular controversies,” when they are engaged in managing foreign affairs.

Lamken never relaxed his studied emphasis on his description of the legislation as dealing only with “one case with one caption, ruled upon by one judge with one decision.”  That decision came out exactly as Congress had sought — the victims stand to get the assets.

From all appearances, the Court did not seem persuaded that it was confronted with a genuine separation of powers controversy.  That changed, however, when the two other lawyers in the case went to the lectern and boldly asserted that Congress can alter any case that is pending in the courts, if it takes the specific step of modifying the law as it applies to only one single, pending case.

Arguing for the victims seeking the large cache of assets, Washington, D.C., lawyer Theodore B. Olson went so far as to suggest that, if the courts were considering the case of “Jones v. Smith,” it would be within Congress’s authority to pass a law that worked to assure that Smith would be the winner.   When the Chief Justice asked him if Congress could tell the courts in a specific case that it had to rule in the way that a Cabinet officer had wanted, could it do that, Olson replied that “Congress does that all the time.” 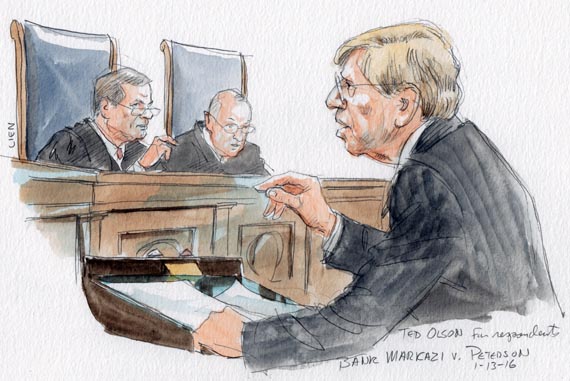 As his argument proceeded, Olson would suggest that this broad power to legislate would have to be exercised before the case had become final in the courts.  But, if it acted soon enough to direct a specific case, it would definitely have the power to do so — even if the law passed to do that would apply to only that one case.  At times, it did appear that the victims’ lawyer was trying to make some concessions to judicial sensitivity, but it was not clear that the Justices by then were hearing any qualifications on the seeming breadth of his overall argument.

The Chief Justice by then was taking over much of the questioning, and it was apparent that he was growing a bit agitated with the responses he was getting, no doubt beginning to sense that the Court itself might be subjected to that kind of legislative intervention.  In fact, at one point Olson told Roberts explicitly that Congress could take such action on a case pending before the Justices.

During the argument of Deputy Solicitor General Edwin S. Kneedler, who essentially made the same arguments as Olson, it was suggested from the bench that  Congress might not act so blatantly in a case like “Jones v. Smith” to say outright that Smith should win, but could instead find ways to achieve that by simply “tweaking the law.”  Roberts quickly retorted, telling Kneedler: “You’re saying that Congress has to be cute about it.  They can’t say Smith wins.  But they can say in the case of Jones v. Smith where the critical issue is this, we can change that in a way so Smith wins. . . .  It’s just a cute way of saying Smith wins.”  Kneedler gently suggested that that was “not fair.” 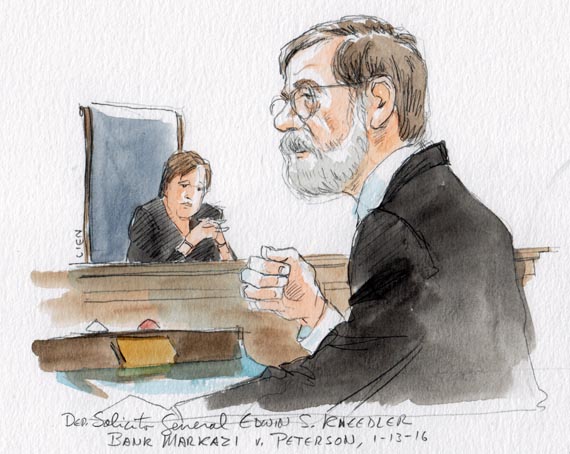 By then, any attempt by the lawyers to qualify their arguments so as not to be threatening to judicial sensitivity seemed to be falling on deaf ears.