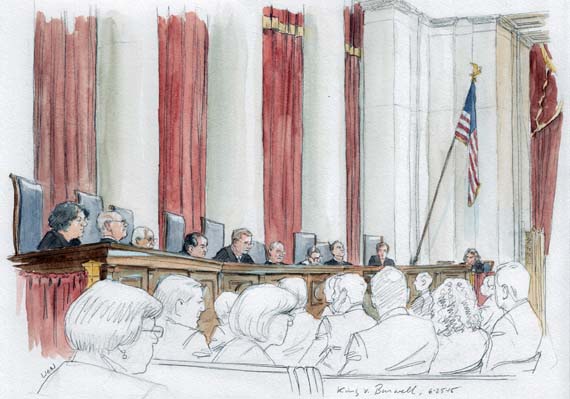 Pumping new life into the Affordable Care Act in a way that, together with President Obama’s veto pen, will ensure that the law lasts at least another nineteen months, a divided Supreme Court ruled on Thursday that subsidies to help lower-income Americans buy health insurance will remain available in all fifty states.

That, the Court concluded by a six-to-three vote, was what Congress intended when it passed the sweeping overhaul of the health insurance market five years ago.   If the subsidies are not available across the nation, Chief Justice John G. Roberts, Jr., wrote for the majority, that would bring about “the type of calamitous result that Congress plainly meant to avoid.”

Had the ruling in King v. Burwell gone the other way, to eliminate subsidies in thirty-four states, at least 6.4 million Americans likely would have almost immediately lost the insurance coverage that many of them have for the first time.  And, given the way Congress wrote an interlocking law, the cascading effect of the loss of subsidies for so many probably would have collapsed the whole arrangement — a point that Roberts embraced in foreseeing the potential for a “death spiral” for the ACA.

The Chief Justice’s twenty-one-page opinion was an often technical interpretation of many arcane provisions of the ACA, but it was clear that the outcome had been driven in considerable part because the majority had accepted the centrality of the subsidy scheme to the law as a whole, and had found persuasive the dire predictions of the impact of sharply paring down that scheme.

The decision closely tracked most of the arguments that the Obama administration had made in defending the nationwide availability of subsidies, in the form of tax credits.

“Congress,” the Chief Justice wrote, “passed the Affordable Care Act to improve health insurance markets, not to destroy them. If at all possible, we must interpret the Act in a way that is consistent with the former, and avoids the latter.”

The only point on which the administration’s defense had failed, and it made no difference, was that the Court said it would not accept uncritically the suggestion that Congress had left it to the Internal Revenue Service to decide where the subsidy scheme would apply.  The Court said the law was “ambiguous” on that point, but it refused to defer to the IRS, commenting that that agency has no experience in health policy.

Instead, the Justices in the majority accepted as their judicial task the parsing of the interwoven features of the law as it defined the system of “exchanges” — marketplaces on which consumers would shop for health insurance coverage — and found a variety of reasons for concluding that nationwide availability of the subsidies was necessary to make the entire law work as Congress had intended.  Those, it said, were as vital to the law as the curbing of insurance companies’ option of turning away sick people and the mandate that virtually all Americans must obtain health insurance or pay a penalty.

Three years ago, the Court in a closely divided decision upheld the mandate to buy insurance, and thus salvaged that central provision, only to be confronted with a new challenge, to the scope of the subsidies arrangement.

The Chief Justice wrote the bulk of that opinion in 2012, and it was widely speculated that, in the process of reaching the decision that saved the insurance mandate, he may well have switched positions.

Although many observers had thought that the outcome of this new high-stakes controversy was anything but predictable, the Roberts opinion and his oral announcement gave no hint that, for the majority of six Justices, the outcome was ever in doubt through the nearly four months of deliberation since the case was heard in early March.

The one negative note in the Roberts opinion, and he repeated it in several different ways in announcing the decision orally, was a complaint that Congress had done a rather sloppy job of composing the ACA, making it very difficult for the courts to make sense of all of it.

The ruling, however, has little or no chance of putting an end to the fervent opposition that the ACA has in conservative political circles and with many Republican politicians, including many in Congress.  The desire of Republican lawmakers to enact a total repeal of the law, however, could never succeed even if passed because of the reality that President Obama would veto it.

There may be some legislative efforts to modify the law in some respects, but any changes that would threaten core parts of the overall ACA would face the same veto threat, it seems clear 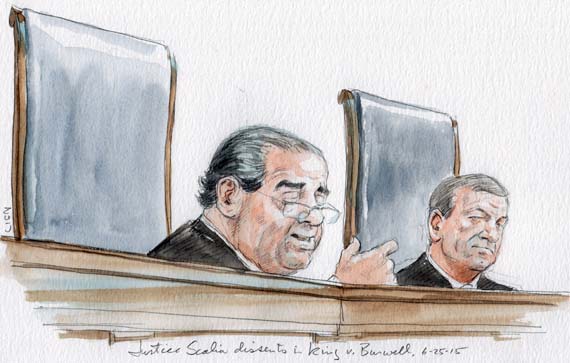 Justice Antonin Scalia wrote a typically strongly worded dissent, which he summarized orally from the bench in sometimes emphatic tones.   Criticizing the new ruling along with renewed criticism of the 2012 decision in the insurance mandate case, Scalia wrote that the Court majority had gone out of its way twice to bend judicial principles in order to salvage the ACA.   He suggested, wryly, that the law should go by the name “SCOTUScare” for the Court’s initials.

His dissent was joined in full by Justices Samuel A. Alito, Jr., and Clarence Thomas.

The ACA, though surviving this new challenge to its basic legal architecture, is still facing other legal complaints in lower courts, including a claim that the entire law was unconstitutional because it was not passed by the procedure required by the Constitution.   That is an issue that awaits a decision by the U.S. Court of Appeals for the District of Columbia Circuit.

In addition, the Republican leadership of the House of Representatives has sued to challenge the Obama administration’s one-year delay of an ACA mandate to employers to provide full health insurance coverage, and to the system of subsidies as those are paid to insurance companies to encourage them to provide low-cost premiums for the poor. That case is awaiting a decision by a trial judge in the U.S. District Court in Washington, D.C.