Opinion analysis: Is the New Deal in new trouble? 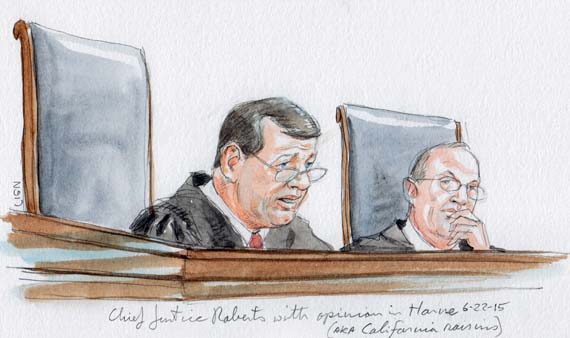 One of the more durable legacies of Franklin Roosevelt’s New Deal in the 1930s was the idea that the farm economy can be bolstered by paying growers to keep some of their crop off the market, or paying them not to grow some of it at all.  One of those programs ran into a high constitutional fence on Monday, raising at least some question about how long the idea can continue unchanged.

Depending on how farmers, and their lawyers, interpret the new decision in Horne v. U.S. Department of Agriculture, it could pose a threat to a wide range of government subsidy programs that seek to keep crop prices up by keeping supply down.  That formula has been used since 1949 for the California raisin industry under a 1937 farm law, but its future is in doubt.  What happens to other farm regulatory programs will have to await further development.

The feature of the raisin program that a Court majority condemned constitutionally is that growers are required to turn over full control of a part of their annual crop to the government, to be held off the market temporarily to push up prices for the annual crop as a whole.  Whether the growers get anything back, after the government finds ways to dispose of those put in the set-aside bin, was the feature that led the majority to say it is a form of government seizure for which the growers must get fair compensation under the Fifth Amendment.

Although eight of the nine Justices agreed that the raisin program does involve a form of “taking” private property for public use, three of those eight split off from the others on the question of whether the amount the growers were now due for the takeover of their raisins could be settled now.

The three partially dissenting Justices wanted the case sent back to lower courts to weigh whether the raisin-growing family that challenged the program was entitled to any compensation, because they may have benefited financially from the better prices that raisins supposedly got because of the market effects of the government set-aside regime.

The other five Justices supported, as the compensation now due, the release of the family from a duty to pay the Agriculture Department a fine of $483,843.53, plus a civil penalty of about $200,000.  Because those five had the votes to control the outcome, the case is now over with the waiver of that obligation.

The ninth Justice, Sonia Sotomayor, dissented, arguing that the raisin growers were not deprived of all of their ownership interests in the raisins that they had to hand over, and thus there was no “taking.”  Sotomayor disputed the majority’s claim that it was not threatening other forms of agricultural subsidy programs, ones that do not have the takeover of full control of the set-aside part of the crop.

The Department of Agriculture has said that there are seven existing programs, including the one for raisins, that operate on the set-aside principle, in which the farmer loses control of the crop turned over to the Department.  The others involve California almonds, dates, dried prunes, and walnuts, plus tart cherries grown in seven states and spearmint oil produced in five states.

Chief Justice John G. Roberts, Jr., in writing for the majority, said that the Court was only dealing with a situation in which the owners of the raisins actually had the raisins taken away from them and put under government management.  That was the equivalent, Roberts wrote, of the government physically taking over private property just as if it had seized the raisin growers’ land.   The Constitution makes no distinction, the main opinion said, between complete government takeover of real estate and personal property.

The parts of the Roberts opinion that condemned the raisin program seemed to make it at least arguable that a farm program regime that merely regulated how much of a crop could go to market, instead of putting it totally under government control, might not offend the Constitution.

The Roberts opinion was joined in full by Justices Samuel A. Alito, Jr., Anthony M. Kennedy, Antonin Scalia, and Clarence Thomas.  Justice Stephen G. Breyer, in an opinion joined by Justices Ruth Bader Ginsburg and Elena Kagan, went along with the majority on the “taking” conclusion, but disagreed on how to calculate the compensation due.