Opinion analysis: No new limit on police use of force

Amid an emotional national debate over claims that police are too quick to use excessive force, the Supreme Court ruled on Monday that officers have some leeway to fire their guns to subdue a mentally disturbed person who is violently threatening them.  The Court did so in a narrow ruling giving some protection to two San Francisco police officers who forced their way into a woman’s room at a group home for the mentally ill and shot her multiple times, because she was armed with a knife and was making death threats.

The Court had taken the case of City and County of San Francisco v. Sheehan to decide two important questions dealing with police reaction to emergency situations involving a violent mentally disabled person, but it wound up deciding neither of those issues.  Instead, it said the law on both is still an open question, even while sparing the two San Francisco officers from a constitutional claim. 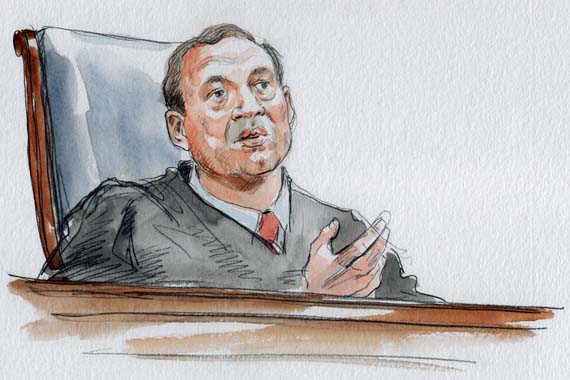 As a result of the limited scope of the ruling, the Court provided little new guidance on the larger question of how the Fourth Amendment applies to claims that police used unnecessary force in carrying out arrests or other confrontations with the public — an issue that has gained new intensity in the wake of incidents in Ferguson, Mo., and other communities in recent months.

At most, the Court on Monday declared that it was not clearly established seven years ago, when the San Francisco incident occurred, that the Fourth Amendment requires police to take special precautionary steps to accommodate the mental disability of a person whom they are trying to subdue.   Because that was not the law at the time, the two officers had legal immunity from the woman’s claim that the Fourth Amendment require such an accommodation, according to the six-to-two decision.  (Justice Stephen G. Breyer took no part, because his brother, a federal judge in California, had ruled on the case in a lower court.)

By finding immunity for the two officers, the Court thus left for another day whether the Fourth Amendment does impose such a duty on police.  That was one of the two questions the Court had agreed to decide in taking on this case.  The other issue it had taken on — but wound up choosing not to decide — was whether such an accommodation of a mentally disturbed person is independently required by the federal Americans with Disabilities Act.

The ADA question remains open when the case returns to lower federal courts.  Because the Court opted not to decide that question, finding that San Francisco had switched its arguments as the case unfolded in the Court, the officers and the local government in San Francisco potentially still face the prospect that they will be found to have violated the ADA.

Justice Samuel A. Alito, Jr., wrote the majority opinion, joined by Chief Justice John G. Roberts, Jr., and Justices Ruth Bader Ginsburg, Anthony M. Kennedy, Clarence Thomas, and Sonia Sotomayor.  Justice Antonin Scalia, in a partial dissent joined by Justice Elena Kagan, argued that the Court should not have decided any issue in the case, because doing so rewarded the city for “snookering” the Court by inducing it to grant review on a question it did not intend to argue.

The incident arose in August 2008, when a city social worker called in police after he had been threatened by Teresa Sheehan when he went to check on her at the group home, Conrad House.  Police Sergeant Kimberly Reynolds and Officer Katherine Holder came to his assistance.

When Sheehan refused to open the door to the officers, they let themselves in with the key provided by the social worker, and Sheehan came at them with a knife, making death threats of the same kind she had made to the social worker a few minutes earlier.  After calling for back-up, the officers decided that they could not wait any longer to deal with Sheehan and entered her room again, this time with guns drawn.

After Sheehan could not be subdued with pepper spray, the officers opened fire, wounding Sheehan but not killing her.  She later sued for claimed violations of the Fourth Amendment and the ADA, a 1990 law that requires government programs to take steps to accommodate the disabled.

After the city government lost in the U.S. Court of Appeals for the Ninth Circuit, on both of the issues Sheehan had raised, San Francisco officials took the case on to the Supreme Court.

In Monday’s decision, the Court ruled that the officers did not violate the Constitution on their first entry into Sheehan’s room, and that the use of force on entering the second time was “reasonable,” but it did not decide whether the two officers were liable on Sheehan’s constitutional claim that the Fourth Amendment required them to accommodate her mental condition.   That was not clearly established at that time, the Court found, so the officers have immunity from that specific claim.