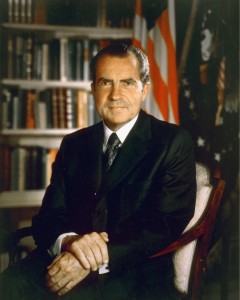 Justice Antonin Scalia hosted the winner’s lecture in the Courtroom and opened the evening by sharing one of his memories of “Dean Griswold, as I always called him.” Scalia recounted how he’d gone to Cleveland to interview at Jones Day, and was seated next to none other than Dean Griswold on his return flight to Harvard. The Justice credited Griswold with helping him decide to take the job in Cleveland, Griswold’s hometown, and both men would later work for the Nixon administration.

McMahon’s discussion focused on Nixon’s approach to the Supreme Court and the president’s challenge to judicial liberalism. Rejecting the view that Nixon’s Court was “an anti-revolution that wasn’t, ” McMahon suggested that Nixon’s intentions towards the Court have been misunderstood, and his successes underappreciated. He selected three moments from his book that shed light on Nixon’s objectives.

McMahon recalled Verlyn Klinkenborg’s The Last Fine Time, which revolves around a blue-collar Polish-American bar in Buffalo, New York, and explained that as a candidate, Nixon was trying to appeal to the kind of characters who frequented that bar: white ethnic Catholics who were uncertain of the kind of Democratic liberalism that the Warren Court’s decisions represented.

The first moment from the book that McMahon selected was Nixon’s August 8, 1968 press conference accepting the Republican Party’s nomination to run for President. In his address, Nixon focused on what was to become the foundation for his campaign: The Social Issue. Consisting of social ills like riots, drugs, and pornography, the Social Issue arose from a breakdown of the traditional order. Among Nixon’s target demographic, there was a pervasive feeling that the liberalism of the Warren Court, which had issued decisions “releasing murders and aiding Communists,” was to blame for the downturn in order, and the concomitant strengthening of criminal forces.

In light of these attitudes, McMahon said, Nixon adopted two specific areas of interest on the Court’s docket rather than a broad agenda: law and order, and school integration.

The second moment that McMahon chose to focus on was Nixon’s nominations of Lewis Powell and William Rehnquist, which came after Nixon’s successful appointments of Justice Warren Burger, chosen for being tough on crime and moderate on civil rights, and his “Minnesota twin,” Justice Harry Blackmun.

The vacancies created by the retirements of Justices Hugo Black and John Harlan in 1971 came as Nixon was planning his second presidential campaign. “You can get a sense of how important it was to use [these vacancies] for political gain because the conversations were recorded,” McMahon quipped. Thanks to the substantial archive of his conversations, we know Nixon believed that the most politically expedient options would be to appoint a woman, a Catholic, or a southerner.

McMahon explained that Nixon’s thinking was motivated by the possibility of George Wallace of Alabama challenging him in the 1972 campaign.   If Wallace were to run against him, it would be helpful to have appointed some southerners to the Court. If Wallace didn’t run, then a Catholic or a woman would expand his electoral appeal.

With respect to nominating a woman, Nixon said in one recorded conversation, “Hell, I’m against it myself, but it’s got to be done.” As he figured, nominating a woman to the Court wouldn’t lose him any votes, and it might help him pick up a few. (McMahon reported that Burger threatened to resign when he found out that Nixon planned to nominate a woman, but Nixon didn’t care.)

Nixon announced his intention to nominate Mildred Lillie, a Catholic appeals court judge in California (who would have been the first woman appointed to the Court) and Arkansas attorney Hershel Friday. After the ABA rated both “unfit for the judiciary,” Nixon began his search again, this time with a mind towards quality, rather than politics, and settled on Lewis Powell as his southerner.

Rehnquist, who served as Nixon’s Assistant Attorney General for the Office of Legal Counsel, was well respected for his intellect but didn’t offer any political gain. In recorded conversations discussing the prospect of a Rehnquist nomination, Nixon, still intent on getting some political pay-off out of his appointments to the Court, joked that Rehnquist should get a sex change, or at least switch religions.

Rehnquist ultimately became the Nixon Court’s most successful opponent of liberalism. Returning to his thesis, McMahon pointed out that this was hardly Nixon’s intention, and was rather a by-product of the failure of the Friday and Lillie nominations.

The third moment from his book that McMahon touched on was the Court’s decision in the school desegregation case of Swann v. Mecklenburg Board of Education.

Erwin Griswold argued the case for the Nixon administration. Griswold had been appointed Solicitor General under President Johnson, and, McMahon suggested, Nixon’s choice to keep him in that role signaled that Nixon was less interested in igniting a conservative fire than he was in merely taming liberalism. McMahon also pointed out that the administration stayed almost completely out of most of the big cases before the Court, including Roe v. Wade, but the president was interested in school segregation.

In conclusion, McMahon suggested that, given Nixon’s focus on electoral politics, law and order, and school desegregation, perhaps his approach to the Court was not such a failure after all.