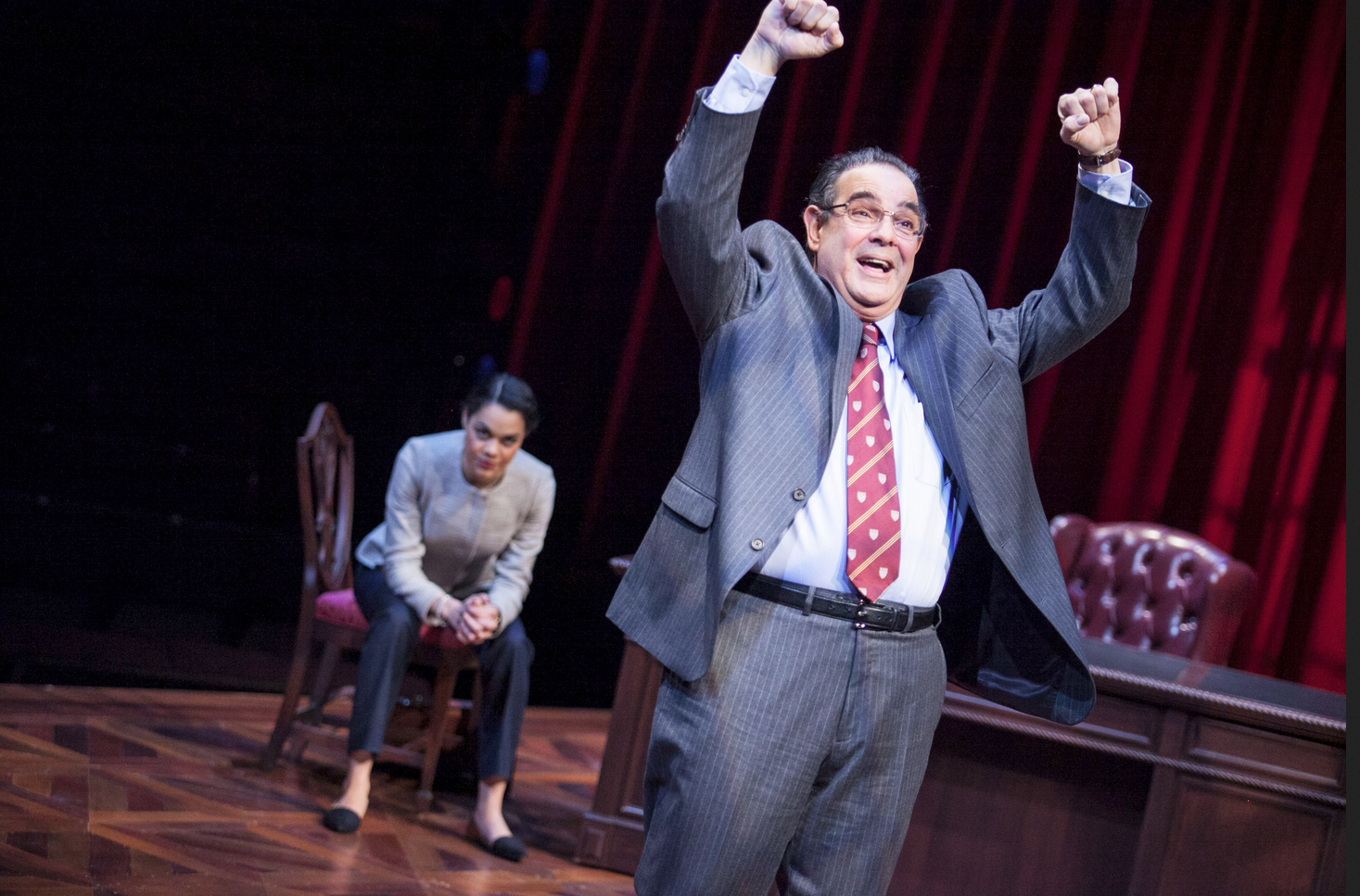 The Originalist is playing at the Arena Stage in Washington, D.C. from now until May 3. John Strand, the playwright, was kind enough to answer a few questions:

Question: You say that Justice Antonin Scalia intrigued you because he’s “kind of a lightning rod.  Half the country thinks of him as a monster and half thinks of him as a hero.” When you set out to write the play, was the goal to create a biographical story about Justice Scalia, or to write an allegory about deep divisions?

Strand: As a playwright, I was intrigued by the character of Justice Scalia, but not with an unauthorized biography in mind. The Originalist is not a bio play, or a documentary, or a law lecture (for which I am utterly unqualified and no theater audience would tolerate, anyway). I wanted to use this combative, almost operatic figure to explore how two people on opposite sides of a political, social, and even legal spectrum can take a step toward one another, begin to listen, learn to hear and respect the other’s argument. Is there still a political “middle” and what does it cost to meet there?

Question: The two main characters in the play are Justice Scalia and his “flaming liberal” law clerk, Cat. Why did you choose to have the play unfold through the relationship between the Justice and a law clerk? Did you consider other scenarios before settling on that one?

Strand: My job is to create a narrative that will engage an audience, hopefully move them and – in this play, at least – inspire them to argue along with the characters. To spark that kind of debate, I wanted two people who are passionate, committed and willing to fight for what they believe. I also wanted to begin with what looks like a total mismatch: a clerk fresh out of law school versus one of the most learned, accomplished and fearsome jurists of our time.

Question: How did you research what it’s like to be one of Justice Scalia’s law clerks?

Strand: I interviewed a couple of former Scalia clerks – who wish not to be named, and I will honor that. I did not ask for information on legal issues, only what it was like to work for Justice Scalia. The answers surprised me. A picture emerged of a warm, caring man who took the time to know his clerks personally, someone who welcomed hearing the other side of an argument, if it is well argued. A mentor, perhaps even a father figure.

Question: Since Justice Scalia’s character is based on a well-known public figure and Cat’s is not, you had much more latitude with who she could be. How did you decide what attributes to give her?

Strand: Her attributes are meant to play off the perceived characteristics of the Justice – the flaming liberal and advocate of the “living Constitution” versus the staunch conservative textualist. Conflict, confrontation, and perhaps eventually a meeting of two very different minds.

Question: Related to the previous question, what were you hoping to bring out of Justice Scalia’s character by having him play against a character like Cat?

Strand: I wanted an audience to hear Justice Scalia’s viewpoints, then hear them challenged—that’s Cat’s role. We use excerpts from the real justice’s dissents, for example, and various rulings and opinions. When words are given to an actor to pronounce on a stage in a live performance, they take on a depth and an echo that they don’t have when we read them or hear them filtered as sound bites through the media. In the quiet and focus of the theater, we can hear the words—really hear them—and consider what they mean. Then we, the audience, are better armed to counter-argue, if we are so inclined.

Question: Certain things about Justice Scalia – like his humor – seem to lend themselves to theatrical adaptation quite nicely. But other aspects – like his work as jurist – are so abstract and require so much explanation that they don’t seem like a natural fit for the stage at all. What were some of the challenges and rewards of writing his character?

Strand: A character as colorful as Antonin Scalia has a natural presence on a stage; that’s the reward. A challenge in this play was striking a balance: enough legal detail to achieve authenticity while avoiding the somniferous effect of too much legalese. Washington, D.C., might be full of lawyers but a typical theater audience is not, even at Arena Stage.

Question: There’s a very introspective exchange between Justice Scalia’s character and Cat in which he shares his feelings with her about not receiving the nomination to be the Chief Justice. How did the scene come about?

Strand: Part speculation on the playwright’s part, although the topic is explored in Joan Biskupic’s excellent biography of Scalia, American Original. Our character Scalia needs to appear vulnerable at some moment, to have suffered a disappointment, to earn an audience’s empathy.

Question: Did you have any plays, books, or films about judges or other historical figures in mind while you were writing?

Strand: Not really. All new territory for me.

Question: Who should see this play and why?

Strand: Anyone who cares for superb acting – the phenomenal Edward Gero, who has Justice Scalia down to the very hand gestures and gait, Kerry Warren as Cat and Harlan Work as the conservative clerk. They are exceptional talents, all of them. But I think liberals and conservatives both might be surprised by the play. Maybe their expectations will be challenged. I’ve had some telling comments from both sides – a liberal who declared, “Well, I still don’t trust Scalia, but I loved the play,” and a conservative who told me, “Okay, it’s good, but we could use more Scalia in there.”