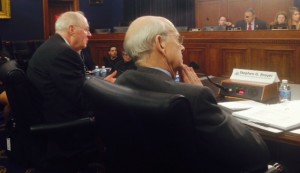 On Monday afternoon Justices Anthony Kennedy and Stephen Breyer testified before the House Appropriations Committee. The purpose of the hearing was to discuss the Court’s budget for the next fiscal year and the federal judiciary, but the legislators also took full advantage of the occasion to touch on other topics as well.

Rep. Ander Crenshaw, a Republican from Florida, commended the Court on its proposed budget of $78.2 million, which is almost $1 million less than was requested last year. He commented that “[w]e don’t see that very often.”

In their opening remarks, the Justices each stressed that funding the Court was necessary, but not sufficient, for the judiciary to function well.

Justice Kennedy spoke about the budget for the federal judiciary as a whole, telling the committee members that it’s “important for Congress to realize, it isn’t just judges; there are 7,900 probation and pre-sentencing officers, and this is cost-effective,” because it keeps people out of custody — a topic that would resurface later in the meeting. Justice Kennedy also warned the committee that the Court’s plans to implement an electronic filing system may require the addition of one or two staff positions next budget season.

Starting with more concrete business, Rep. Crenshaw asked for updates on the previously approved $120 million appropriation for refurbishing the Court’s grounds, as well the restoration of the Court’s façade. Justice Kennedy reported that the refurbishment is complete and came in under budget. He did describe one snafu, in which rectangular windows were ordered instead of the trapezoids that the Court actually needed. “That,” he noted ruefully, “was about a $15 million mistake.” Restoring the façade is a separate project, and only the restoration of the entrance on the West side (facing the Capitol building) is complete.

Turning to another matter of old business, Rep. Sanford Bishop Jr. (Democrat of Georgia) asked about the continued effects of sequestration. Justice Kennedy prefaced his answer by saying that he hadn’t researched it, but offered that the judicial branch has “a tradition of being very prudent.” And therefore, cutbacks often translate to delays in processing cases. Returning again to the 7,900 federal probation officers, Justice Kennedy pointed out that if those officers are laid off, it means there are more people in prison, which is more expensive, “so it actually works backwards.”

Rep. Steve Womak (a Republican from Arkansas) asked the Justices about their IT upgrades, and he mentioned some of the technical difficulties other agencies have had in the hope that the Court might be able to offer guidance. Justice Kennedy demurred, while Justice Breyer focused on technology as a means of educating the public about the Court’s work. He reported that the Court’s website receives 75 million hits a month, although he expressed uncertainty about whether that was a lot.

Rep. Womack then shared that he has “some very strong feelings” about prison overcrowding, and he suggested that “[w]e need to start prioritizing a little bit how we deal with this.” Justice Kennedy, who authored the majority opinion in Brown v. Plata, the Court’s most recent decision on the issue of prison overcrowding, agreed, telling the members of the committee that “[t]he corrections system is one of the most overlooked, misunderstood institutions in our entire government.” He characterized corrections as a step-child of the criminal justice system, explaining that lawyers are very curious and engaged when it comes to determining guilt and innocence, but after that “no one is interested.” Kennedy compared U.S. and European approaches to corrections and concluded that “we haven’t given it nearly enough thought.”

Steering the meeting back to more easily solvable problems, Rep. Scott Rigell (Republican of Virginia) asked how the Court had developed the software it will use for the electronic filing system, and whether it developed in-house? Jeff Minear, the counsel to the Chief Justice, whispered to Justice Breyer that it was.

Rigell then asked Breyer if he could elaborate on how to educate people about the role of the Court.

Breyer explained that in Congress disagreement is more readily expected and accepted because there are elections to vote out people who get things wrong. By contrast, at the Court, there are no elections, yet Justices – like members of Congress – frequently disagree. “So somebody is wrong,” Breyer said. “So why should you support an institution like that?” Obviously, there are lots of reasons, but making them clear is hard. At one point, he suggested that it would be helpful to get Ken Burns to make videos that visually tell the stories of a few landmark cases to show “what it means that we live in a society of 310 million different people who stick together because they believe in a rule of law.”

“When you talk about education,” Rep. Crenshaw said, “the question always comes up: Maybe you should televise oral arguments? And I just wondered, do you sense any change on that? Do you think there will be a day when arguments will be on television?” “If you had an English-style debate,” Kennedy answered, “and it was either pro or con, you could make a lot of good arguments” for allowing cameras in the courtroom – for example, it would teach people, and it would be useful to lawyers arguing cases. The public would see that the Court spends “a lot of our time on our technical commitments,” hearing cases about patent law and railroad reorganization and such. And most importantly, people would see that the Justices are “rational and respectful; . . . when we’re in disagreement, it’s not to make our colleagues look bad, but to make the institution look good.” But one major negative, in his view, trumps these advantages: “We are concerned that the presence of cameras would create a dynamic where people are trying to look good on TV.”

Breyer offered his own behavior as an example, telling the committee, “I can best focus by giving some ridiculous example. But my friends in the press say . . . see if you’ll do that when it ends up on the evening news, out of context.” Despite the current Court’s resistance to televising arguments, however, Breyer was emphatic that it would happen one day, with a new generation of Justices.

Bishop asked how the judiciary was doing in its efforts to recruit more minority clerks. Although he didn’t have the numbers for other courts, Kennedy reported that in 2014 fifteen percent of the Court’s clerks were minorities in 2014.

Bishop then asked about how the Court should deal with recusals, and particularly whether the Code of Ethics should apply to the Justices. In his response, Kennedy made two points. The first was that statutes and principles, which are not necessarily governed by the Code of Ethics, govern most of the Justices’ recusals. Second, he was skeptical of the benefits of having the Justices explain their reasons for recusal. Breyer — who indicated that he had never seen any behavior on the Court that was not consistent with the Code of Ethics — was similarly suspicious of mandating that the Justices be bound by the same code as other judges. In a court of appeals, the Justice explained, it’s possible to have another judge fill in if someone is recused. That’s not possible in the Supreme Court.

Bishop noted that the Court’s caseload was half of what it was ten years ago, and he asked Kennedy and Breyer whether the Court had a target for the number of cases it should hear each Term. Kennedy responded that, although the Justices “take cases where we think our guidance is needed,” he believed that the optimal number is roughly one hundred cases a year. However, he also pointed out that the Court’s docket is getting much more technical, which requires more research. For example, he said that he spent a large portion of one summer researching the patentability of genes before the Court heard Association of Molecular Pathology v. Myriad Genetics. Although the docket of seventy-eight cases last Term “exhausted us,” Kennedy was confident they could handle a hundred. Breyer didn’t exactly disagree, but he asserted that the Court has not avoided taking any cases in which its guidance was needed. “Sandra, Sandra O’Connor, before she retired used to sit there and say, ‘We have to take this! We need more cases!’ and now he does it,” he said, pointing to Justice Kennedy.