After Appomattox: Michael A. Ross discusses Reconstruction and the three branches 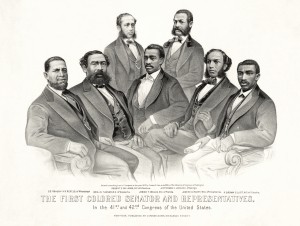 On March 11, the Supreme Court Historical Society presented the first installment of this year’s Leon Silverman Lecture Series. In acknowledgment of the 150th anniversary of the Confederate surrender at Appomattox on April 9, 1865, the theme of the 2015 lecture series is “The Supreme Court and Reconstruction.”

Justice Anthony Kennedy, who appeared ready for spring in a lovely lavender tie, hosted the lecture in the Court’s chamber. He was joined by the Court’s portrait of Justice Samuel Freeman Miller – a Lincoln appointee and the author of the majority opinion in the Slaughter-House Cases – which was given a place of honor next to the speaker’s podium.

Wednesday’s lecturer was Michael A. Ross, Associate Professor of History at the University of Maryland.

Ross began his lecture at the chronologically obvious point for a talk about Reconstruction: General Lee’s surrender. By the time Lee surrendered, the war had cost over 620,000 lives and $6.6 billion. (To put this sum into perspective, Ross noted that it would have been sufficient to buy the freedom of all the slaves, and give them each forty acres, and still have $3.5 billion remaining.) To end the fighting was an enormously consequential action. But equally consequential was that the war ended without a peace treaty. Five days after Lee surrendered, President Lincoln was assassinated and his vision of Reconstruction, including dissolving the entire leadership of the Confederacy and extending suffrage to at least some black men, died.

Lincoln was succeeded by Vice President Andrew Johnson, a Democrat from Tennessee – the last state to join the Confederacy. Ross recounted that Johnson had been picked as vice president “[i]n a show of Union solidarity.” It was indeed a show, and when Johnson assumed office the curtain fell on his previous “tough talk” about punishing the South.

A month into his presidency, Johnson had extended “sweeping amnesty” to southerners. Although few groups – including high-ranking Confederate Army officials, war criminals, and the planter class – were not given amnesty, they could still ask Johnson for a personal pardon, which he liberally bestowed over 7000 times. Ultimately, Ross said, very few white southerners were disenfranchised. As for extending the franchise to blacks, Johnson famously declared that the United States “is a country for white men, and by God, as long as I am president, it shall be a government for white men.”

In response to Congress’s efforts, Johnson openly encouraged the southern states not to ratify the Fourteenth Amendment. Then, in 1867 Congress passed The Reconstruction Acts, which Johnson promptly vetoed. On the same day, the House and Senate both overrode his veto with two-thirds majorities and subsequently dissolved the south until it ratified the Fourteenth Amendment. Congress also implemented “Radical Reconstruction,” placing ten southern states under military control. The antagonism between the legislative and executive branches reached a fever pitch in February 1868, when Congress impeached Johnson. He came within one vote of being relieved from his presidential duties.

In the midst of the battle between the branches, “[t]he biracial state only survived via military support,” Ross said. “Republicans hoped that with the help of the Fifteenth Amendment, blacks wouldn’t need the military support anymore, because they would be represented in government.”

The Fifteenth Amendment, last of the Reconstruction Amendments, was adopted in 1870, the same year that representation in Congress was restored for the last of the southern states (Georgia) and that Mississippi’s Hiram Rhodes Revels won Jefferson Davis’s seat and became the first black senator.

Against this backdrop, Reconstruction came to the Court for the first time in the form of the Slaughter-House Cases in 1873.

Among critics, Ross explained, the Slaughter-House Cases have a reputation for prejudicially restricting the Privileges and Immunities Clause of the Fourteenth Amendment. Many who hold that view also believe that the Court was willfully and odiously obstructing Reconstruction by interpreting the Amendment narrowly. Ross set out to put the decision into context, with the aim of debunking that view of the Court.

For starters, Ross said, the Slaughter-House Cases were brought by white butchers in response to a law passed by a biracial legislature – specifically, a Louisiana law requiring all slaughterhouse operations to be centralized. The law was intended to avoid contamination of drinking water and the attendant outbreaks of cholera, but the butchers felt it harmed their business. Through their attorney, John A. Campbell, a former Supreme Court Justice who was forced into early retirement due to his Confederate loyalties, the butchers claimed that the law infringed on their Fourteenth Amendment rights.

While critics argue that the limits imposed by the Court’s decision in the Slaughter-House Cases gutted the Fourteenth Amendment’s protections, Ross suggested that the five-Justice majority took the long view because it “sided with the biracial legislature, [holding that] a federal court could not obstruct a biracially passed state law.” The Court was, he believed, very sensitive to the promise of the Fifteenth Amendment and the fact that blacks were being elected to public office. According to Ross, what the Court’s opinion demonstrates is not that the Justices were obstructing Reconstruction, but rather the strength of their belief that greater representation of blacks was the key to Reconstruction.

In 1875 Congress passed the Civil Rights Act. Almost immediately, federal courts filled with black litigants who had been denied access to dining areas, train compartments, and other “public accommodations” due to the color of their skin. In an eight-to-one decision, the Court held the Civil Rights Act unconstitutional. The dim view, Ross suggested, is that by ruling the Act unconstitutional, the Justices basically issued an opinion that said: Being denied access to the dress circle is not slavery. But that’s not the only available reading.

“Many commentators point to the Civil Rights Act cases as a smoking gun,” Ross said, “showing that the Court was out to get Reconstruction.” But, he said slowly, the Justices in the majority were appointed by Republican presidents.

Complicating the critics’ “retreat from reconstruction” narrative, Ross pointed to several cases of the same vintage in which the Court defended blacks’ participation on juries and in legislatures and upheld the convictions of white supremacists. In the 1880s, he explained, politicians in the South were actively courting black voters, and blacks were actively participating in governance. Countering the critics, Ross suggested that the Justices were seeing the gains in representation that blacks were making, and they firmly believed that the public accommodations at issue in the Civil Rights Act cases would follow naturally from those gains.

Of course, that’s not what happened.

The critics’ view that the Court was obstructing Reconstruction, Ross concluded, seems reasonable to us now largely because “[w]e all know how this ends; black codes were resurrected with Jim Crow, and the Court began capitulating where it hadn’t before.”

Why the Court began capitulating will be a topic of discussion at the next lecture, which will be presented by Pamela Brandwein of the University of Michigan. That lecture will be held May 13 at 6:00 p.m., at the Court.