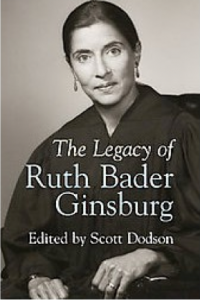 It looks like 2015 might be the year of books on the Justices, mainly the female members of the Supreme Court.

Linda Hirshman (a retired professor of philosophy and law) likewise has a forthcoming book, one on Justices Ginsburg and Sandra Day O’Connor.

There is also a book manuscript titled Feminist Judgments: Rewritten Opinions of the United States Supreme Court that is working its way through select university press publishing houses. Linda L. Berger, Bridget J. Crawford, and Kathryn M. Stanchi are the editors of the proposed book.

There is even a forthcoming book on Justice Sonia Sotomayor, albeit one for children ages six to nine.

There is, of course, more as indicated by the list of recently published and forthcoming books on the Court and its members. There is also a book of fiction, a novel by David Lat .

The Court, its processes, & decision-making

The Court & other branches of government