Court difficult to read on Facebook threats: In Plain English

It is often hard to make predictions about how a case will turn out based on the oral arguments.  That was particularly true today, in Elonis v. United States.  At issue in the case is whether a Pennsylvania man’s conviction for making threats on Facebook should stand when he claims he was just “venting” about his personal problems and did not actually mean to threaten his ex-wife and an FBI agent.  Although the Roberts Court has been consistently supportive of free speech, even when the substance of that speech is unpopular or even downright offensive, it wasn’t clear this morning that Anthony Elonis can count on the same kind of support.  At the same time, there was no obvious path to victory for the federal government either, and the end result could be a decision that neither side likes.  Let’s talk about today’s argument in Plain English. 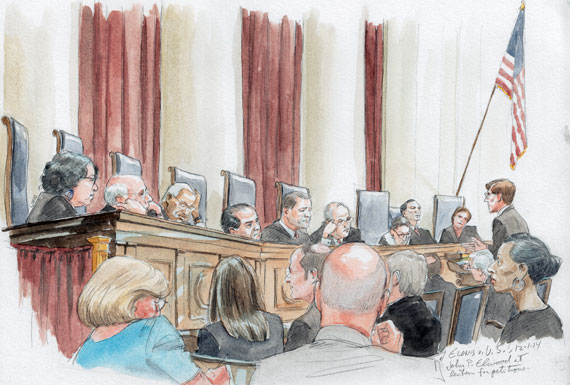 As I explained in my preview last week, the case before the Court boils down to what test a court or jury should use to figure out whether threatening statements like the ones that Elonis made on Facebook are “true threats” that are not protected by the First Amendment.  The government argues that the test should be an objective one that looks at whether an average person (in legal parlance, a “reasonable person”) would interpret the statement as reflecting a serious intent to harm someone.  By contrast, Elonis argues that the test should be a subjective one:  did he personally intend to threaten anyone?

At oral argument today, Justice Sonia Sotomayor was puzzled about whether there was actually any difference between the two standards.  If you can infer someone’s state of mind from the circumstances “of how and what was said in words,” she asked, isn’t the jury really looking at what a reasonable person would think anyway?

Of all of the nine Justices on the Court, Justice Samuel A. Alito is the Justice least likely to give First Amendment protection to offensive or unpopular speech.  Thus, he was the Court’s lone dissenter in Snyder v. Phelps and United States v. Stevens, in which the Court ruled that protests at the funeral of a fallen soldier and dogfighting videos are both protected by the First Amendment.  Nothing that he said today suggested that Elonis’s chances of getting his vote were any better.  During the oral argument of John Elwood, who appeared on Elonis’s behalf, Justice Alito quoted from one of the Facebook posts, regarding a shooting at a kindergarten, which had formed the basis for Elonis’s conviction. What if, Justice Alito asked, Elonis had ended the post with the phrase “just kidding, just kidding,” and described himself as an aspiring rap artist.  Do you think, Alito asked Elwood (in a tone which strongly suggested that the answer was “no”), Congress really wanted the application of the statute at issue to turn on an inquiry into “a really strange psychological state”?  (Alito also displayed his familiarity with Facebook in this exchange, hypothesizing that someone might have “liked” Elonis’s post by putting a “thumb up.”)  And at the very end of the argument, Alito told Elwood that his proposed standard “sounds like a road map for threatening someone and getting away with it” – just put your threats in the form of rap lyrics and post it online.

Whether he ultimately winds up in the majority or the dissent, this time around Justice Alito might have the company of Justice Antonin Scalia, who famously complained earlier this year that he dislikes rock music and today made clear that he is not a fan of rap music either.  At one point, he observed that, although the government’s proposed standard may be a fairly easy one for prosecutors to satisfy, that was not a problem because the statements at issue aren’t, as speech goes, very deserving of protection; he later repeated that thought, grumbling that “this language is not worth a whole lot anyway.”  And he asked Deputy Solicitor General Michael Dreeben, arguing on behalf of the federal government, to confirm that someone convicted of making threats online could get off with just a fine – at least suggesting that he might be willing to rule in the government’s favor if the penalty for violating the statute is not particularly stiff.

Even Justice Ruth Bader Ginsburg – who returned to the bench just a few days after having a stent inserted in her coronary artery – seemed skeptical about how Elonis’s proposed standard would work as a practical matter.  Although she asked only three questions during this oral argument (she was more active during the first argument, as my colleague Mark Walsh reported earlier today), in two of those she pressed Elwood to explain how the government would prove whether a particular threat, “in the mind of the threatener[,] was genuine?”

One of Elonis’s strongest allies on the bench was Chief Justice John Roberts, the author of the Court’s opinions in both the funeral protests and dogfighting cases.  The Chief Justice asked Dreeben several times to clarify what exactly the government would mean by a “reasonable person”:  in the case of stupid teenagers making threats while playing video games online, for example, would a jury consider how a hypothetical “reasonable person” might perceive the threat, or would it consider instead what a “reasonable teenager” might think?  When Dreeben responded that it would depend on the audience to whom the teenagers were speaking, the Chief Justice expressed frustration with what he regarded as the potential for the statute to be applied inconsistently to the same speech:  “So if the teenager has a lot of friends on his Facebook page . . . then you are going to evaluate it by a different standard than if he only has a few friends that have access to his statements?”

The Chief Justice returned to this issue again later in the oral argument, asking Dreeben whether the government’s standard might result in prosecutions for violent rap lyrics – including lyrics by Eminem that (in what was almost certainly a first at the Court) the Chief Justice quoted at some length.  Dreeben tried to reassure him that it would not, because rap artists are in the business of entertainment.  That did not appear to satisfy the Chief Justice, however.  He implied that the government’s reasoning was somewhat circular, because a budding but as-yet-unestablished rap artist might find himself in jail before he had the chance to become a famous rap artist.

Justice Elena Kagan focused most of her energies at the oral argument on an effort to arrive at some sort of middle ground.  She proposed what she described as a “recklessness” standard – someone like Elonis could be convicted as long as he knew that there was a substantial probability that his speech would place his ex-wife in fear, even if he didn’t actually intend to threaten her.  Such a standard, she suggested, would create a kind of “buffer zone” that would provide more protection for speech than the government’s proposed rule, but at the same time would presumably avoid the kind of inquiry into the speaker’s subjective intent that Elonis would require.  It will come as no great surprise that neither side was a fan of Justice Kagan’s proposed standard.  Elwood warned that it would result in the prosecution of stupid teenagers making threats while playing video games online, while Dreeben cautioned that such a standard would prevent the government from, for example, prosecuting someone who calls in a bomb threat while drunk, notwithstanding the “panic and disruption” that would ensue from the threat.

We’ll probably have to wait several months to find out which side’s rule prevails or whether Justice Kagan’s “recklessness” standard gains traction.  Whatever the ruling and whenever it comes, we’ll be back to report on it in Plain English.