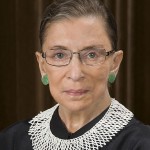 UPDATED Thursday 11:51 a.m.   Justice Ginsburg was released from the hospital this morning, the Court has announced.  She expects to be on the bench next Monday for oral arguments.

Eighty-one-year-old Justice Ruth Bader Ginsburg had a surgical procedure this morning to relieve a blockage in an artery in her heart, the Court announced.

She had gone to the MedStar Washington Hospital Center on Tuesday night after experiencing discomfort “during routine exercise,” the Court statement said.   The procedure involved placing a stent to open the right coronary artery.

“She is resting comfortably and is expected to be discharged in the next 48 hours,” according to Kathleen L. Arberg, the Court’s public information officer.