Courtroom view: Justice Ginsburg, finding her footing back at work 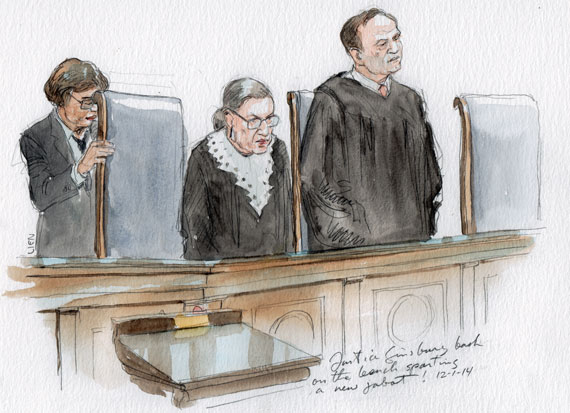 Just five days after leaving the hospital after surgery to relieve an arterial blockage, Justice Ruth Bader Ginsburg was back on the bench Monday morning as the Supreme Court opened its December argument sitting.

The eighty-one-year-old Justice had been expected back since the Court’s Public Information Office announced last week that she would take the bench just days after the November 26 procedure, in which doctors inserted a stent to open her right coronary artery. She had experienced discomfort the night before during her routine exercise regimen.

The Justices took the bench at ten o’clock this morning as usual. The only hiccup was that Justice Ginsburg and the other two Justices who enter from an opening in the red curtain at the right (facing the bench) – Samuel A. Alito Jr., and Elena Kagan – were a beat or two behind their six colleagues, who enter from two other openings.

It appeared that Justice Ginsburg, who leads her trio by virtue of seniority, was making sure of her footing as she ascended the few small steps to the raised marble platform on which the bench rests.

Once she took her seat, though, Justice Ginsburg seemed to be right at home. SCOTUSBlog artist Art Lien says that she appeared to be sporting a new, wider-than-normal jabot. (Whether the decorative cream-colored neckpiece the Justice wore today is technically a jabot is beyond my or Art’s fashion expertise.)

While many in the courtroom were in anticipating the second case scheduled for argument today – Elonis v. United States, about threats on Facebook – the Justices themselves took with enthusiasm to the first case. In Perez v. Mortgage Bankers Association, the banking industry is challenging whether the Department of Labor followed the Administrative Procedure Act (APA) in issuing an “interpretive rule” making mortgage-loan officers eligible for overtime pay instead of following more formal rulemaking procedures.

The four members of the Court who have served on the U.S. Court of Appeals for the District of Columbia Circuit, which handles a lot of APA cases, seemed especially into the argument, as was Justice Stephen G. Breyer, a First Circuit alum who pronounced the case “fascinating” and suggested he could write “a new treatise on administrative law in this subject.”

Justice Ginsburg (a D.C. Circuit alumna) did not ask the first question from the bench, as she often does during arguments, but she did chime in before five minutes had passed.

“Is this an unusual situation, or in classifying employees for purposes of the Fair Labor Standards Act, has the agency changed its mind about an initial classification?” she demanded of Deputy Solicitor General Edwin Kneedler. “I mean, here we have the agency has taken different views on whether loan officers qualify as administrative officers. Is the Fair Labor Standards Act subject to this kind of review and revision by the department?”

It was soon established, as all participants well knew, that changes in presidential administrations had twice led the Labor Department to flip its views on overtime for mortgage officers.

Later in the argument, Justice Ginsburg was even more back to form as she repeatedly pressed a point with Allyson N. Ho, the lawyer representing the Mortgage Bankers Association (which represents the banks that don’t want to pay the overtime, not the loan officers who are presumably happy to receive it).

“Why wouldn’t the 2006 [Labor Department] interpretation, which you say should have stuck … why, if it’s substantive, then the 2006 interpretation was equally defective because there was no notice and comment for the 2006,” Justice Ginsburg asked. “If you are trying to characterize the 2010 rule as not interpretative, I don’t see how you can say, oh, but the 2006 rule was interpretative.”

Justice Ginsburg asked a few questions during the Elonis argument, as well, though there was more competition from her colleagues during that hot-button case. Throughout the morning, the Justice sat as she usually does, leaning slightly forward, focused intently on the proceedings for two straight hours. (No leaning back in her chair, no staring at the ceiling, no chit-chatting with her neighbors on the bench.)

Without a doubt, Justice Ginsburg had found her footing back at work.