“It’s a very bad statute,” complained Justice Antonin Scalia toward the end of today’s oral argument in Whitfield v. United States.  He was referring to 18 U.S.C. § 2113(e), which imposes a minimum of ten years in prison when a bank robber “forces another person to accompany him” during or when fleeing from the robbery.

The Justices seemed equally dissatisfied with their choices in interpreting Section 2113(e).  On the one hand, reading the statute to be triggered only if the robber forces someone to accompany him for a substantial distance – as petitioner Larry Whitfield urged the Court – might result in a rule that was arbitrary and difficult to administer.  On the other hand, the Justices were clearly concerned that adopting the government’s broader reading would give prosecutors too much discretion to include charges under Section 2113(e) as leverage to secure a guilty plea.  And although Assistant to the Solicitor General Brian Fletcher, arguing on behalf of the United States, tried hard to assuage those fears, at least some Justices seemed to be inclined to support a middle ground. 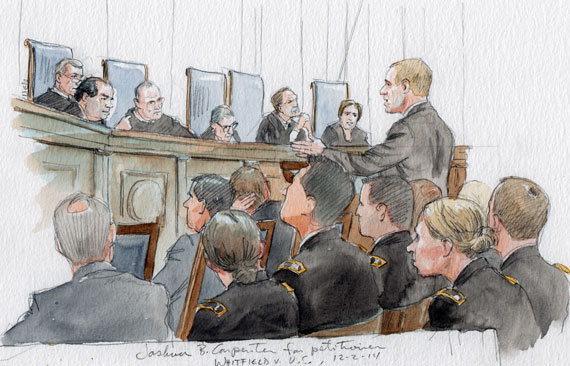 Joshua Carpenter for the petitioner

Joshua Carpenter argued on behalf of Whitfield, a North Carolina man who entered the home of seventy-nine-year-old Mary Parnell after his attempt to rob a local credit union failed.  Whitfield instructed Parnell to move with him to her home’s computer room so that police – who were by then searching the neighborhood – wouldn’t be able to see him.  Parnell suffered a heart attack and died.  Carpenter’s first line of argument – that the ordinary usage of the word “accompany” would not apply to Whitfield because Parnell and he had only moved a short distance – found few takers.  Justice Scalia noted that he could accompany his wife to the table, while Justice Ruth Bader Ginsburg gave him another example (that seemed perhaps to derive from recent personal experience):  “The nurse accompanied the patient as she walked around the intensive care unit.”

Most of Carpenter’s time at the lectern, though, was spent fleshing out his proposed rule and trying to convince the Justices that it could work.  Carpenter’s focus on whether the bank robber had forced a bank teller or bystander to engage in “substantial” movement drew criticism.  Justice Anthony Kennedy wanted to know why it wouldn’t be “substantial” to go from one room to another, while Justice Stephen Breyer observed that a “few feet” would sound substantial to him.  Carpenter also agreed to a slightly different formulation of his rule that would look at whether the forced movement was more than “de minimis.”  But (much as he had with regard to what constitutes “substantial” movement), Justice Samuel Alito pressed Carpenter to explain how, if the Court were to adopt his rule, a judge should define “de minimis” for a jury.

Carpenter tried to deflect the Justices’ concerns by emphasizing that Whitfield’s case would be an easy one under his proposed rule, because Whitfield had only forced Parnell to move a few feet within her home.  But Justice Breyer urged him to articulate a more generally applicable standard, one that “people can understand.” When Carpenter suggested that the rule could account for the distance that a victim was forced to travel, whether the bank robber and the victim had exited a home or building, and whether the victim was taken to a different place, Justice Alito countered that Congress had imposed additional penalties under Section 2113(e) to account for the trauma and distress that a victim may experience – an objective that would not be considered under a purely spatial rule.  Justice Ginsburg chimed in here, remarking that Whitfield’s case itself presents “the very problem” that Congress intended to address with subsection (e):  Parnell was terrified when Whitfield broke into her home, and she died as a result. 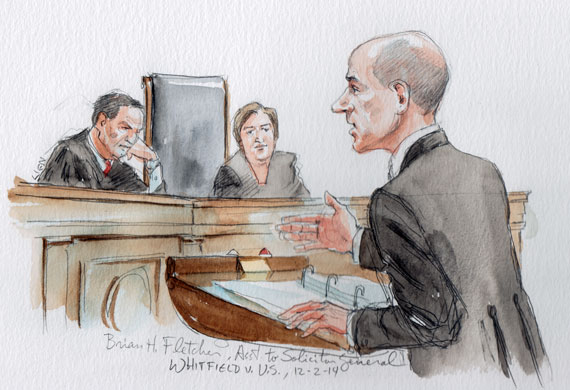 Assistant to the Solicitor General Brian Fletch for the United States

During his turn at the lectern on behalf of the United States, Fletcher took a hard line:  Whitfield’s conduct fell squarely within the text of Section 2113(e), which does not contain any “qualifying language” that might limit its application.  And he declined to endorse a “de minimis” rule, maintaining that the provision applies to “forced movement” even if the bank robber only compels someone to move a few feet.  At the point that you draw any other line, he cautioned the Court, the rule that Whitfield proposes would be difficult to administer and would leave out exactly the kinds of cases that Congress intended to target with the “forced accompaniment” provision.

Even if the Justices may have seemed dissatisfied with Carpenter’s efforts to draw a line on behalf of the defendant, Fletcher also faced tough questions from Justices who – as in last month’s argument in Yates v. United States, in which a Florida man was prosecuted under a federal destruction-of-evidence statute after he ordered his crew to throw undersized fish overboard – were worried that prosecutors might, in “comparatively trivial” cases, nonetheless routinely bring charges under Section 2113(e) in the hope of getting the defendant to plead guilty.  Justice Breyer led this charge, imploring Fletcher to reassure him that this would not happen.  Fletcher referred the Court to several cases in circuits that had adopted the government’s rule, suggesting that prosecutors had exercised their discretion in those cases not to bring charges under Section 2113(e), but Justice Kagan was looking for more comfort than that.  She asked Fletcher, “That’s what you are going to leave it to . . . it’s just going to be prosecutorial good judgment”?

Chief Justice John Roberts was also skeptical about Fletcher’s assurances that prosecutors would not bring charges in minor cases.  He reminded Fletcher that the manual used by federal prosecutors instructs government lawyers to “charge as large an offense as possible,” but Fletcher countered that the manual actually provides that prosecutors should “charge the most serious offense that’s consistent with the nature of conduct at issue” – an admonition that “permits, and in fact requires, an individualized assessment of the defendant’s conduct.”  Fletcher reiterated that the government does not in fact deploy Section 2113(e) very often, because the “overwhelming majority” of bank robberies involve someone asking a teller for money at the counter, either orally or in a note.  When bank robbers go beyond that, he argued, Congress made a judgment that such conduct should be subject to greater penalties.

Apparently exploring another way to resolve the case that would both cabin prosecutorial discretion and avoid a rule based primarily on how far the bank robber required someone to move, Justices Scalia and Breyer both seemed to suggest a rule that would focus instead on how much fear the forced movement caused – Congress’s main concern in enacting the “forced accompaniment” provision.  But it’s hard to locate support for such a rule in the text of the statute, so the Justices could find themselves back at Square One.