Sherlock Holmes and the mystery of copyright 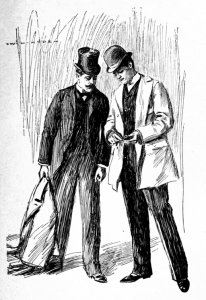 Are Sherlock Holmes and Dr. Watson still under a legal cloak (or cape, if you will) of copyright law?  The Supreme Court may have to solve that mystery, to decide a new legal plea filed Tuesday by the estate of Sir Arthur Conan Doyle, the Scottish creator of that fictional detective and his far less colorful companion.

The estate has been attempting to block a California lawyer and Holmes fancier, Leslie S. Klinger, from publishing a new book about the two characters unless he is willing to get a license from the estate and pay a fee.  The U.S. Court of Appeals for the Seventh Circuit rejected the estate’s copyright claim, calling it “quixotic.”  The new filing at the Court, including the Seventh Circuit’s ruling as an appendix, has been docketed as 14A47, and can be read here.

At this point, the Doyle estate is only seeking a delay of the Seventh Circuit’s ruling, until it can file a petition for review of the decision itself.  The Seventh Circuit refused a stay on July 9.  But to deal with the application, the Court will have to decide whether the legal claim has any chance of ultimately succeeding and decide who might be hurt if a stay is, or is not, issued..

Doyle has been dead for eighty-four years, but because of extensions of copyright terms, ten of his fifty-six short stories continue to be protected from copying.  All of the short stories and four novels were published between 1887 and 1927, but all of the collection except ten short stories have entered into the public domain as copyrights expired.

The Doyle estate, though, is pressing a quite unusual copyright theory.  It contends that, since Doyle continued to develop the characters of Holmes and Watson throughout all of the stories, the characters themselves cannot be copied even for what Doyle wrote about them in the works that are now part of the public domain and thus ordinarily would be fair game for use by others.

Los Angeles lawyer Klinger has published one collection of Holmes stories — for which his publisher, Random House, paid a $5,000 fee to the Doyle estate.  Klinger and a co-editor have been planning a sequel volume, to be published by Pegasus Books and to be distributed to booksellers by W.W. Norton & Co.

This new volume has not been completed, because when the Doyle estate heard about it, it demanded that the editors get a new license and pay a new fee, which they have refused to do.   After the estate said that it would use its connections with Amazon.com and others to see that the new book did not get distributed, and added that it might sue for copyright violation, Klinger sued the estate in federal court to get the copyright issue settled.

In its ruling in mid-June, the Seventh Circuit found that nothing in the planned new volume will touch upon what Doyle wrote about his characters in the final ten stories that remain protected.  With its focus on those characters in the earlier, and no longer protected works, the new volume did not violate any of the estate’s copyrights, the court of appeals decided.

If the estate were to win its claim, the opinion remarked, it would mean virtually a perpetual copyright for works even though they are in the public domain and even though the Constitution says that copyright is to extend only for “limited times.”

The estate, the Circuit Court said, was seeking 135 years of copyright protection “for the character of Sherlock Hollmes as depcirted in the first Sherlock Holmes story” that appeared in 1887.

That is the ruling that the estate is planning to appeal to the Supreme Court.   Its main argument is that, if other authors may exploit the Holmes and Dr. Watson characters, that “will stifle the estate’s ability to manage the Sherlock Holmes character’s further promotion and development through licensing agreements at a time when Sherlock Holmes movies and television shows are more popular than ever.”

Even though the new Klinger work would refer only to the characters as they existed in the earlier, public domain works, the estate argued, “Sherlock Holmes and Dr. Watson were not static but dynamic literary characters who changed and developed” throughout all of the stories in which Doyle wrote about them.

The estate’s application was filed with Justice Elena Kagan, who handles requests for temporary legal orders from cases originating in the Seventh Circuit’s geographic area.  The Klinger lawsuit against the state began in federal district court in Illinois.

Justice Kagan has the authority to act on the stay request on her own, or to share it with her colleagues.  Even though the Court is in its summer recess now, that would not prevent it from acting on the application.

Justice Kagan has the option of asking for a response from Klinger before she acts or refers the matter to the full Court.