In its unanimous and relatively brief opinion in Lane v. Franks, authored by Justice Sonia Sotomayor, the Court concluded that Edward Lane, an employee at a community college program, possessed First Amendment protection for his testimony in a criminal prosecution resulting from fraud in that program.  However, the Court also found that the college president, Steve Franks, possessed qualified immunity for the termination of Franks because the existence of First Amendment protection was not “beyond debate.”  In a two-paragraph concurring opinion, Justice Thomas, joined by Scalia and Alito, stressed the limited nature of the decision, reinforcing a footnote in the Court’s opinion. 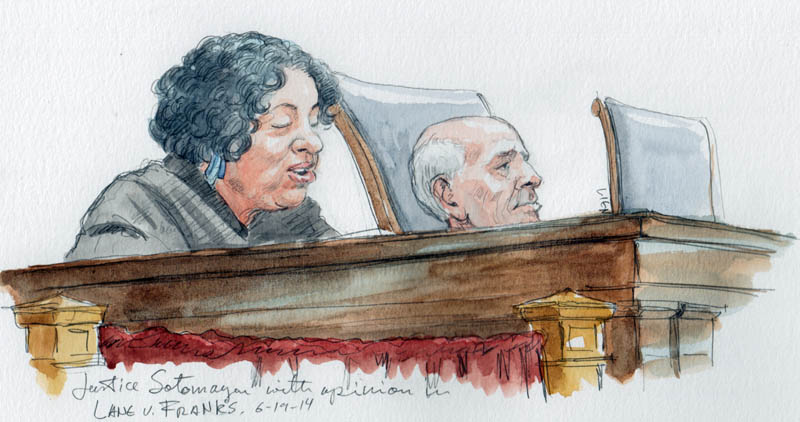 There is no mistaking the Court’s holding:  “[T]he First Amendment protects a public employee who provided truthful sworn testimony, compelled by subpoena, outside the course of his ordinary job responsibilities.”  The Court’s discussion of precedent is likewise clear.  The Court articulates the “framework” of  Pickering v. Board of Education, which in the first line of the opinion it notes is almost fifty years old, and then quotes the “two-step inquiry” of the Court’s most recent public employee speech case, Garcetti v. Ceballos.

The Court’s analysis is similarly straightforward.  It first inquires whether Lane’s testimony at the criminal trials “is speech as a citizen on a matter of public concern.” Lane’s testimony is “speech as a citizen,” it reasons, because it is testimony and because it is similar to the letter to the editor by the teacher in Pickering and distinguishable from the internal memorandum by the prosecutor in Garcetti.  And it is also speech on a matter of public concern:  the content involved corruption in a public program and misuse of public funds, and the context was sworn testimony in a public trial.   It then proceeds to the second inquiry, the consideration of whether the government as employer had an “adequate justification,” sometimes known as the Pickering balancing test.   The Court finds that in this case, “the employer’s side of the Pickering scale is entirely empty.”   In the space of a few pages, the Court easily concludes that Lane’s testimony is protected by the First Amendment as “speech as a citizen on a matter of public concern.”

But for all the Court’s clarity that the Eleventh Circuit was clearly mistaken, it finds that Lane’s First Amendment right was not sufficiently “clearly established”  to vitiate Franks’s claim of qualified immunity.  Franks could “reasonably have believed, at the time he fired Lane” that a government employer could terminate an employee for subpoenaed testimony.  The Court concludes that an Eleventh Circuit case, decided several years before Garcetti, “did not preclude Franks from reasonably holding” a belief that he could terminate Lane.  And further, the Court states that “no decision of this Court was sufficiently clear to cast doubt” on that Eleventh Circuit case.   Other cases from the Eleventh Circuit or cases from other circuits were similarly insufficient to negate Franks’s reasonable belief.   The Court quotes its decision in Ashcroft v. al-Kidd, noting that the doctrine of qualified immunity “gives government officials breathing room to make reasonable but mistaken judgments about open legal questions,”  and that to defeat qualified immunity the legal issue needed to be “beyond debate” when Franks terminated Lane.

The Court’s opinion corrects an errant circuit court opinion and perhaps even clarifies the protection of the First Amendment rights of public employees in a narrow category of situations involving subpoenaed testimony.  It does leave open other situations, stressed in the brief concurring opinion and included in a footnote in the Court’s opinion, which would involve government employees who testify as part of their regular duties, such as police officers and lab analysts.  But the opinion also demonstrates the increasingly impenetrable qualified immunity standard insulating government actors.

[Disclosure: Goldstein & Russell, P.C., whose attorneys contribute to this blog in various capacities, serves as counsel to the petitioner in this case. However, the author of this post is not affiliated with the firm.]