Opinion analysis: A ruling inviting a plea to overrule

In an opinion filled with strongly implied invitations to file a new case to go even further, the Supreme Court, dividing five to four, ruled on Monday that public employees cannot routinely be required to join labor unions or to support them by paying dues.  If state or local government workers who oppose unionism take the hint, this new decision may well spawn new lawsuits that could spell doom for organizing those workers for collective action.

The ruling in Harris v. Quinn, at a minimum, raised serious new doubt about continued majority support within the Court for a 1977 decision, Abood v. Detroit Board of Education — a precedent that is vital to the very concept of public employee unionism.   In paragraph after paragraph, page after page, the main Harris opinion sought to undermine the legitimacy of the Abood precedent.  That the decision survived at all seemed only temporary. 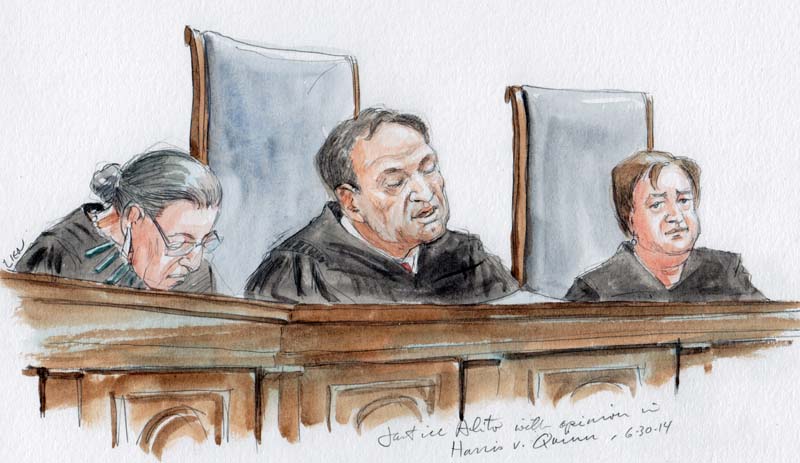 What the Court did do specifically was to draw a legal distinction for now between state and local employees that it will consider to be “full-fledged” public workers and workers who will be treated as something less than that — “partial public employees,” such as the workers in this case — for purposes of union organization.  The workers in this case are home health care workers who look after a patient or two in the privacy of a household.

Illinois state officials mandated that those workers, who mainly answer to the patients for whom they work, nevertheless must provide dues to support a labor union that will represent their job interests before state agencies.  Ruling against that requirement, the Court said the home health care workers are protected by their First Amendment rights from having to put up money to support a labor organization they do not want to join.

A reader of the main opinion by Justice Samuel A. Alito, Jr., going through the opinion from its first page forward without knowing the outcome, could easily have jumped to the conclusion that it was driving toward a declaration that public employees in general should not have to become supporters of unionism — in other words, that it was pointed toward overruling the Abood precedent.

In fact, both sides in the Harris case had made the future of the Abood precedent the focus of their debate in this case.  And Justice Alito’s opinion took up that challenge, going all the way back to the origin in 1956 of the legal idea that, sometimes, workers can be required to join unions or at least to make payments to support them.  He then traced that history up to the Abood decision — applying prior private-sector precedents to the public employee sector — and then proceeded, rhetorically, to dismantle that precedent.

He stopped short of the ultimate conclusion that Abood could no longer stand, however.  While that ruling has many flaws, Justice Alito wrote, the Court could stop at this point by refusing to extend it to “partial public employees.”

The 1977 precedent, confined to public employees, does have “clear boundaries,” the opinion said, but it refused to extend those boundaries to require fee-paying by “partial public employees.”  One of the risks of doing so, Justice Alito added, is that almost any group of workers who receive payments from a governmental agency “for some sort of service” could be put under the Abood union support requirement.  “It would be hard to see just where to draw the line,” the opinion concluded.

Although dues-paying requirements for non-members of a union in a unionized workforce are also common in the private sector, the Alito opinion sought to draw important distinctions between the nature of employment in the public sector as opposed to private industry.

Public employees do not have to worry, the opinion said, about pushing up prices by their demands for wages and other benefits because they work for the government.  Moreover, it added, most of the pulling-and-hauling of bargaining over public empl0yees is a part of the political process.

The opinion took a swipe at public employee unions in Illinois, citing in a footnote a commentator’s claim that public-sector unions there had “helped create a situation in which the state’s pension funds report a liability of more than $100 billion, at least fifty percent unfunded.”

Justice Kagan sharply criticized the Court’s main opinion for “its gratuitous dicta critiquing Abood‘s foundation.”  She defended that precedent as “deeply entrenched,” and as “the foundation for not tens or hundreds, but thousands of contracts between unions and governments across the nation.”  The decision in Harris, the dissenters said, should have begun and ended with the Abood precedent as the guide.