Stopping just short of abandoning a historic barrier to religion in government activity, a deeply divided Supreme Court ruled on Monday that local governments may open their meetings with prayers that are explicitly religious and may turn out to be largely confined to expressing the beliefs of one faith.

Narrowly defining what is not allowed in such prayers, the Court said they may not be used to praise the virtues of one faith and may not cast other faiths or other believers in a sharply negative light.  Courts have no role in judging whether individual prayers satisfy that test, but can only examine a “pattern of prayer” to see whether it crossed the forbidden constitutional line and became a form of “coercion.”

The majority clearly moved the “coercion” test to the forefront of analyzing when government and religion are too closely intertwined.  The alternative test — whether government action “endorsed” a particular faith — was nearly cast aside as taking too little account of the role of religion in America’s history and civic traditions. 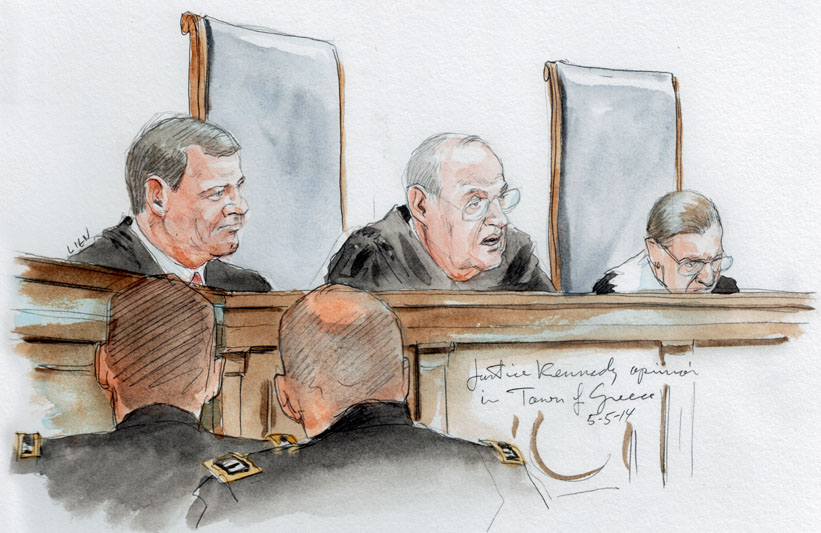 The Court’s majority was divided in the case, but only on how “coercion” is to be defined in a constitutional sense.  Three Justices said that test is satisfied if a town’s governing body ordered the public to join in prayer, criticized “dissidents” who did not share the prayer’s beliefs, or indicated that official action would be or was influenced by whether someone did or did not take part in the prayer exercise.  That group spoke through the lead opinion, written by Justice Anthony M. Kennedy — long an advocate of the “coercion” approach and long a critic of the “endorsement” test.  His plurality opinion was joined by Chief Justice John G. Roberts, Jr., and Justice Samuel A. Alito, Jr.

Two Justices argued that a “coercion” test would be satisfied only if a local government had actually compelled people to be followers of one faith, such as requiring people to go to religious services or to pay taxes to pay for religious institutions.  They spoke through an opinion by Justice Clarence Thomas, joined by Justice Antonin Scalia on that point alone.

The four dissenters complained that the new ruling will strike a heavy blow against the nation’s tradition of religious pluralism, and will lead to prayers that will actively promote a single faith’s religious values.  Justice Elena Kagan wrote the main dissent, joined by Justices Stephen G. Breyer, Ruth Bader Ginsburg, and Sonia Sotomayor.  Justice Breyer also wrote a dissenting opinion speaking only for himself; that opinion focused more narrowly on the facts in this specific case.

Thus the ruling came out five to four, in favor of the practice in a modest sized town in upstate New York — Greece, which is near Rochester.  The case is Town of Greece v. Galloway.  A federal appeals court had struck down the practice, finding it focused so heavily on Christian prayers that it amounted to official city endorsement of that faith.

Although the lead opinion by Justice Kennedy relied very heavily upon the Court’s 1983 ruling in Marsh v. Chambers, upholding prayer to open sessions of the Nebraska state legislature, the opinion reinterpreted the Marsh decision and, in doing so, enlarged the opportunity to deliver such prayers in explicitly religious content and tone, invoking the deity of a given faith.

The Kennedy opinion flatly rejected an interpretation of the Marsh case that a Court majority had made in the 1989 decision in Allegheny County v. Greater Pittsburgh ACLU.  In that ruling, over a dissent written by Justice Kennedy, the Court had said that legislative prayer had been upheld in the Nebraska case only because the actual prayers delivered by the chaplain did not have a “sectarian” cast.   The majority in Allegheny County was applying, to a Christian crèche on government property at Christmastime, the so-called “endorsement test,” long associated with the writings of now-retired Justice Sandra Day O’Connor.

On Tuesday, Justice Kennedy said that was a misunderstanding of the content of prayers at issue in the Marsh case.  And, the Justice went on, that decision stands not only for the proposition that legislative prayer can be upheld because of its long history in American legislative assemblies, but also for the idea that it can be upheld because the Constitution does not forbid “sectarian” prayers in that setting.

The stark difference between the majority opinion in the Allegheny County case and the Court’s new opinion in the Town of Greece case illustrated the progress made by Justice Kennedy toward the Court’s full embrace — although for differing reasons among five Justices who determined the outcome  — of the “coercion” test in determining whether a government practice amounted to an “establishment of religion” in violation of the First Amendment.

Treating the Kennedy opinion as controlling, because it spoke to a middle-ground approach between blocs of Justices who wanted to go further in one direction or the opposite, this is the constitutional prescription it provided for legislative prayers:

The Court is next expected to take some action on religion in public life when it acts on a case that it has been holding, awaiting the outcome of the Town of Greece case.  That case, Elmbrook School District v. Doe, involves the constitutionality of holding a public high school graduation ceremony in a church that has prominent displays of religious symbols and banners.  That case presumably will now be scheduled for the Justices’ consideration, perhaps later this month. (UPDATE: The case has now been set for the May 15 Conference.) In that case, the practice was struck down by the U.S. Court of Appeals for the Seventh Circuit.

The Court has the option of granting review of that case, denying review, or ordering the Seventh Circuit to reconsider, in light of the Town of Greece decision.