Each individual — among hundreds and maybe thousands — found guilty of keeping and looking at images of a child being sexually abused must pay the victim something more than a “trivial” sum, but none of them can be required to pay for all that the victim has lost, the Supreme Court ruled Wednesday in a five-to-four decision.

The ruling in the case of Paroline v. United States, settling a dispute among lower courts on a mandatory law of restitution to victims of child pornography, refused to establish a specific formula for allocating the financial blame, telling federal trial judges to “do their best,” with a few suggestions for starting points.  Justice Anthony M. Kennedy wrote the majority opinion. 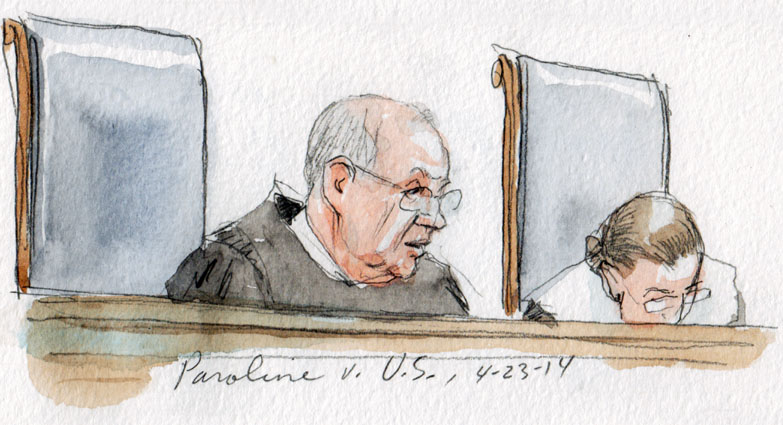 The decision clearly will spare a Tyler, Texas, man, Doyle Randall Paroline, from paying all of the nearly $3.4 million that lawyers for a young woman identified only as “Amy” had demanded from him.  Paroline had two images of her being photographed as her uncle sexually abused her when she was eight years old.  Now a young woman, she had testified that “My life and my feelings are worse now because the crime has never really stopped and will never really stop.”

The Court ruled that a federal district court judge must calculate how much to assess against Paroline personally.  There is no doubt, Justice Kennedy wrote, that Paroline “was part of the overall phenomenon” of distributing and keeping images of the abuse of Amy.  He should have to pay his share and, Kennedy said, it must be enough to send the message that his part in the crime was not victimless.

Lawyers for “Amy” had insisted that Paroline, like everyone who has her images and looks at them, contributes to her continuing injury, so each of them should be required to pay the full amount for her losses, in whatever multiples of individuals are found and prosecuted for having the pictures.

The pictures of “Amy” being abused are among the most widely circulated child pornography images in this country and, apparently, around the world.  The number of individuals possessing them — according to the Court — reaches into the thousands.

Only one Justice — Sonia Sotomayor — agreed with the demand for full restitution, but Sotomayor did so in dissent.  Three other Justices, also in dissent, said that calculating each possessor’s share of the overall harm to “Amy” would necessarily be “arbitrary,” so there should be no restitution to her because Congress had “provided no mechanism” for calculating shares of the cause of her injury.

Justice Kennedy’s opinion took a position in the middle.  It was joined by Justices Samuel A. Alito, Jr., Stephen G. Breyer, Ruth Bader Ginsburg, and Elena Kagan.  Chief Justice John G. Roberts, Jr., wrote the dissent arguing that there was no valid formula for restitution in the child pornography law.  That dissenting opinion was joined by Justices Antonin Scalia and Clarence Thomas.

Justice Sotomayor’s dissent spoke only for herself, arguing that Congress had specified that restitution for the “full amount” of losses was mandatory, as part of the punishment for each one convicted of possessing child pornography involving the victim.

While the Kennedy opinion said that each defendant convicted of having images of “Amy” should be assessed for the degree to which his individual crime was the “proximate cause” of her injury, the Justice stressed that no mathematical formula could be devised for it.

The majority expressed confidence that district court judges could devise ways to make a calculation of comparative harm, aided by the government (which would have the burden of proof on the amount of the victim’s loss).  But, in order to aid the judges in this task, Justice Kennedy laid out some general principles.

First, there must be a conviction, which would establish that the individual in question possessed images of the victim.  Then, turning to restitution, there would have to be proof that “a victim has outstanding losses caused by the continuing traffic in the images,” with such losses to potentially include items such as those listed in the federal law: medical services, physical and occupational therapy, transportation, temporary housing, child care, lost income, and attorneys’ fees and court costs.

Kennedy cautioned that “these factors need not be converted into a rigid formula, especially if doing so would result in trivial restitution orders.  They should serve as rough guideposts for determining an amount that fits the offense.”

In warning against going too far to hold each individual who possesses child pornography financially liable, the majority opinion said there was a risk that this could violate the Constitution’s ban on “excessive” forms of punishment, because restitution is a form of punishment carried out by a government process.