Opinion analysis: Affirmative action — up to the voters

Casting aside a three-decade-old constitutional theory that allowed racial minorities to protect public policies that favor equality, the Supreme Court ruled on Tuesday that a state’s voters have the power to stop officials from using race to shape government programs.  The lead opinion expressed the confident belief that the Court was only encouraging a useful civic conversation about race, hopefully free of rancor.

By a vote of six to two (with Justice Elena Kagan not taking part), the Court cleared the way for voters elsewhere in the nation to opt to put an end to so-called “affirmative action” policies — as seven states now do.  While the ruling focused on the use of race in selecting new students for public colleges, it presumably also would permit voters to end race-conscious policies in hiring of state and local employees and in awarding public contracts. 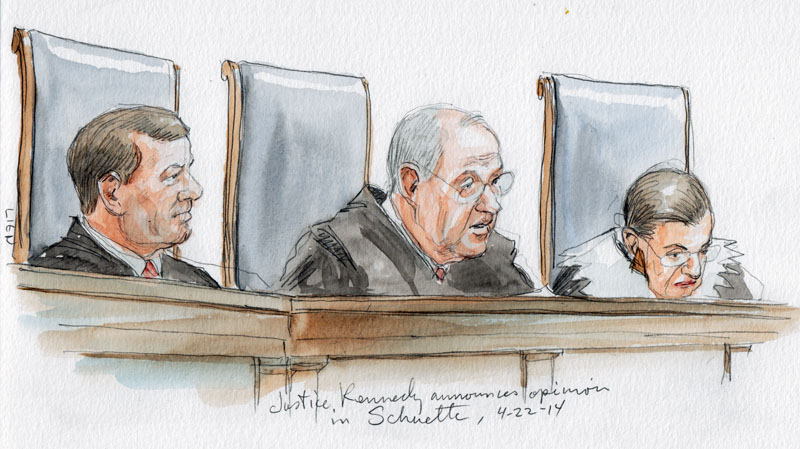 The decision in Schuette v. Coalition to Defend Affirmative Action upheld Michigan’s Proposal 2, approved by the state’s voters in 2006 by a margin of fifty-eight to forty-two percent.  The measure told the state’s public colleges and universities that they could no longer “grant preferential treatment” on the basis of race in their admissions policies.

Justice Anthony M. Kennedy, in the opinion that controlled the outcome, insisted that the Court was saying nothing new on the constitutionality of public policies that take race into account.  “This case,” he wrote, “is not about how the debate about racial preferences should be resolved. It is about who may resolve it….The holding in the instant case is simply that the courts may not disempower the voters from choosing which path to follow.”

He added: “There is no authority in the Constitution of the United States or in this Court’s precedents for the Judiciary to set aside Michigan laws that commit this policy determination to the voters.”

A federal appeals court, the U.S. Court of Appeals for the Sixth Circuit, had struck down Michigan’s ballot measure, relying primarily upon the concept that it is unconstitutional for voters to change the way public policies are developed to make it more difficult to adopt or keep policies that protect racial minorities from discrimination.

That approach, known as the “political process theory,” is traced mainly to a 1982 Supreme Court ruling, Washington v. Seattle School District — a decision that overturned a Washington ballot measure barring the use of busing to achieve racial desegregation in the city’s public schools.

On Wednesday, the Court majority flatly rejected that theory, implicitly overruling that part of the 1982 ruling.  The theory, Justice Kennedy wrote, was not essential to the result in that case, and was itself a form of encouraging an unhealthy tendency to group minority individuals together as if they commonly shared the same views on public policy.

“It cannot be entertained as a serious proposition,” the opinion said, “that all individuals of the same race think alike.”  But, it said, that assumption would have to be the “beginning point” if a court were required to analyze what government policies racial minorities believe to be in their interest.

Pursuing such an inquiry, Kennedy said, would “impose a high risk of inquiries and categories dependent upon demeaning stereotypes, classifications of questionable constitutionality on their own terms.”   Moreover, he said, courts would have to determine “the policy realms in which groups — groups defined by race — have a political interest.”

That process would lead to “racial antagonisms and conflict,” according to the Kennedy analysis.

By contrast, the lead opinion said, voters can be trusted to decide the racial preferences issue at the polls. “Our constitutional system embraces…the right of citizens to debate so they can learn and decide and then, through the political process, act in concert to try to shape the course of their own times and the course of a nation that must strive always to make freedom ever greater and more secure.”

The race issue, Kennedy said, is not so sensitive that it cannot be made the topic of political conversation and submitted to a referendum of the voters.

The Kennedy opinion was supported in all of its reasoning only by Chief Justice John G. Roberts, Jr., and Justice Samuel A. Alito, Jr.   But it will serve as the controlling opinion because its result — upholding Proposal 2 — was supported also by Justices Antonin Scalia and Clarence Thomas.

Those two Justices, however, would have gone considerably further, and declared that no policy that takes race into account can be upheld if it is not a direct remedy for intentional racial discrimination — in other words, they would not allow race-conscious remedies for programs that have a more negative effect on minorities when discrimination was not intended.

Justice Scalia, writing for himself and Thomas, said that the Kennedy opinion left open the power of government to adopt race-based policies to cure “disparate impact” on racial minorities.  Those two members of the Court would have overruled prior decisions of the Court that raised any questions about ballot measures seeking to block measures favored by racial minorities.

Justice Stephen G. Breyer added a sixth vote in favor of upholding the Michigan ballot measure, but he did so on far narrower grounds.  That measure, he said, was designed only to outlaw college admissions that were based solely on race, and nothing else.  Although Breyer thus sought to limit the reach of the Court ruling, it would not do so, because five Justices — a clear majority — had voted in favor of broader rationales for upholding the measure.

Justice Sonia Sotomayor, who recited orally from the bench a lengthy version of her dissenting opinion, said the ruling would make it much harder for racial minorities to defend affirmative action programs.  What had happened in Michigan, she protested, was “the last chapter of discrimination” — changing “the basic rules of the political process in that state in a manner that uniquely disadvantaged racial minorities.”

The Sotomayor opinion, joined by Justice Ruth Bader Ginsburg, ran to fifty-eight pages — surpassing by more than three times the length of the lead opinion by Justice Kennedy and even exceeding the forty-four pages that all of her colleagues had written.