It has been all of thirty years since George Orwell’s “1984,” but imagery from that novel can still be scary, indeed.  The image of a “Ministry of Truth” was floated in the Supreme Court’s chamber on Tuesday, and it drew the Justices away from the constitutional issue actually before them.

When the Justices agreed to hear the case of Susan B. Anthony List v. Driehaus, they stuck to the question: when can an individual go into federal court with a claim that a law which regulates speech violates the First Amendment?  They were not, it seemed, going to review whether the law at issue did violate that amendment.  One would not have known that after Tuesday’s argument. 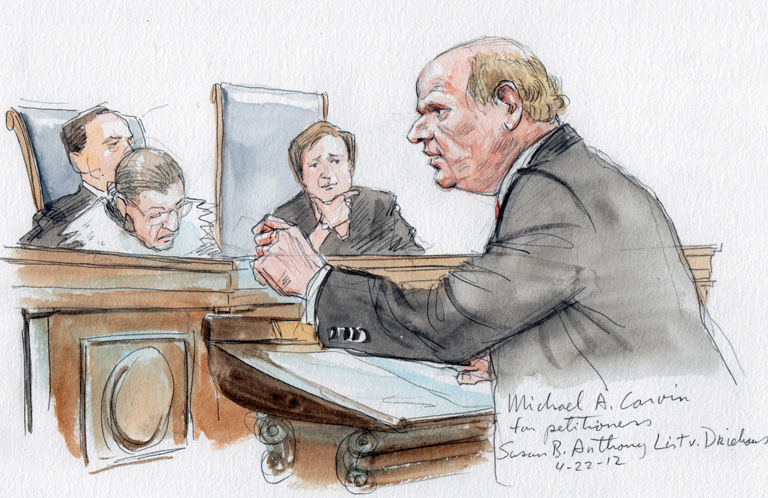 This case is about an Ohio law that makes it a crime to use “false statements” during an election campaign in that state.  The U.S. Court of Appeals for the Sixth Circuit ruled that two anti-abortion groups had no right to be in court with their challenge to that law, because they could not show a genuine risk that it would be used against them.

So, their petition sought to persuade the Justices that they were, in fact, at risk, because a state elections agency had already made a tentative finding that they had violated the law.  That, their lawyer had argued, was enough of an injury to satisfy the limit in the Constitution’s Article III on the right to sue in federal court.

Early in the argument Tuesday, Justice Antonin Scalia asked: “You’re not asking us to resolve the constitutional question, just the question of whether you can raise the Constitution?”  The advocacy groups’ lawyer, Washington attorney Michael A. Carvin, replied: “All we’re asking for is our day in court so that we can make this argument.”

But Carvin had already used the label “ministry of truth” — twice — to refer to the Ohio election commission that had found “probable cause” that one of his clients likely violated the false-statements law.  And, before the hearing was over, Justice Scalia himself invoked that ominous imagery.

The Justices, of course, did spend a fair amount of energy trying to define just how much of a threat of potential prosecution was sufficiently “credible” to justify the advocacy groups going to Court.  But the over-arching concern about government officials watching over an election campaign, at its peak moments, looking for lies, kept rising back into prominence in the argument.

When Eric E. Murphy, representing Ohio, took his turn at the lectern, he was pressed aggressively about how much of a threat the election commission might post in future election campaigns.  Chief Justice John G. Roberts, Jr., for example, demanded:  “Are you prepared to represent to us that if they do the exactly the same thing the next election that they did in the last one, that you will not take action against them?”  Murphy tried to fend off the question, saying he did not have the authority to “disavow” any future action. 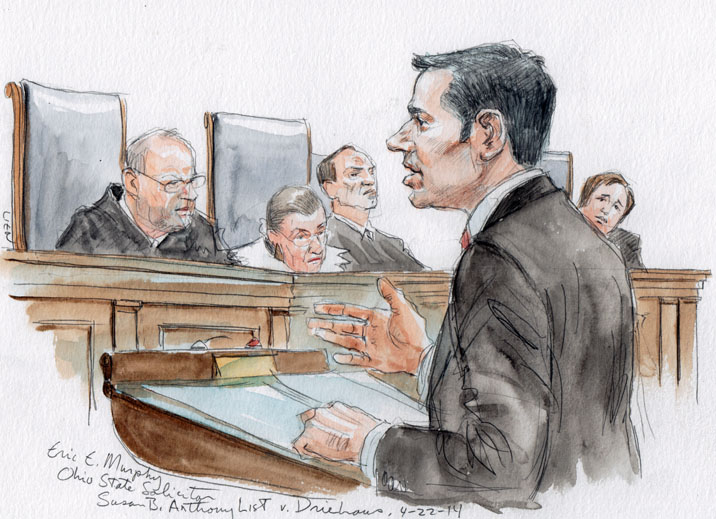 As Justice after Justice questioned him about potential abuses and burdens of the false-statement law, Murphy finally tried to bring the case back to the question before the Court.  The questions about the law, he said, were about the First Amendment, not about Article III’s “standing” requirement.

“In our constitutional system,” Murphy said, “the courts are not . . . roving commissions assigned to pass judgment on the validity of the nation of laws.”  Although this was Murphy’s first appearance before the Court, he was making mature arguments that were clearly designed to keep the Court from reaching the merits of the Ohio law’s validity, but only when it could be challenged in court.

His efforts in that regard, however, seemed mostly to have come in vain.  Justice Samuel A. Alito, Jr., for example, told the state’s lawyer in severely accusatory tones:  “You have a system that goes on and on, year after year, where arguably there’s a great chilling of core First Amendment speech, and yet you’re saying you can’t get into federal court.”

Unbowed, Murphy replied that he thought “these chilling effect concerns should not play a role” in determining whether Article III standing had been shown.

Again, that did not have the intended effect.  Justice Elena Kagan, in a comment that could be taken as a summary of much of the argument, reminded Murphy that his own office expressed “grave concern about the constitutionality of this statute.”

So, she concluded, “that suggests somebody should be able to get into federal court to do this.”

It appeared, at least for this day and this argument, that the issue of the right to sue had been totally merged with the merits of such a lawsuit.  But, if standard practice is followed, even if the Court were to rule that the adv0cacy groups had gotten over the threshold of Article III, the Court would let the lower courts have the first chance to rule on the validity of the Ohio law.