In the digital age, perhaps only someone as old as Justice Stephen G. Breyer (or older) would fret about what might happen to a store that sells “phonograph records.”  It is doubtful, in the extreme, whether there are any of those anymore, but no matter:  Breyer and other Justices searched on Tuesday for ways to demonstrate that they want to be careful about what they do about today’s modes of entertainment.

With a new method of watching TV via an Internet connection before the Court for analysis, the Court moved back and forth between killing that novelty by forcing it to pay sizable fees to download copyrighted TV programs, or giving it a fighting legal chance to survive as a cheaper alternative to cable. 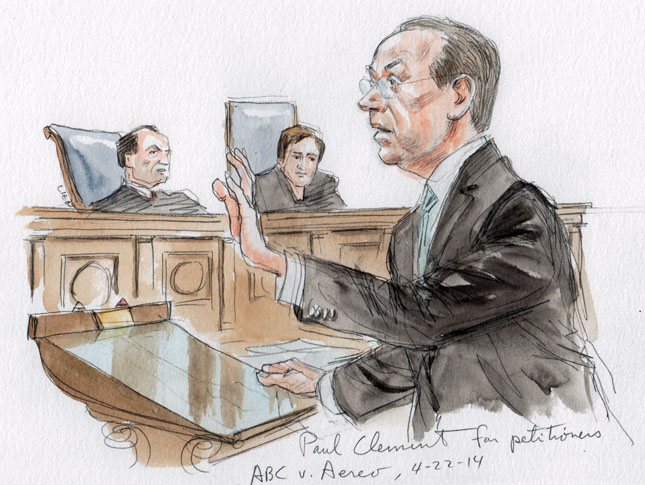 Aside from struggling somewhat to learn just how this new entry in home entertainment actually works, the hour-long hearing in American Broadcasting Companies, Inc. v. Aereo, Inc., found the Court quite worried about “the cloud.”  That’s that capacious site, somewhere in the electronic firmament, where all manner of digital expression and indulgences are stored.  Maybe even a Super Bowl replay, or two.

One lawyer sought to persuade the Court that the cloud is falling, so to speak, while another said not to worry about it, and a third said it means nothing legally if it is only used with “a gimmick.”  All three of those positions can’t be true, but the Court left little doubt that it will have to spend some time and effort exploring which one of them — if any — can be believed.

The legal issue before the Court is misleadingly simple:  is Aereo violating copyright law with its system of renting out thousands of tiny antennas to a growing throng of customers so they can pick and choose the TV programs they want to watch, pulling them from “the cloud” whenever the mood stirs them to do so?

Chief Justice John G. Roberts, Jr., repeated several times his perception that the only reason Aereo put that system together was to engineer its way around the copyright laws.  And, as a general matter, his skepticism seemed to be fairly widely shared across the bench.

But there were indications that some members of the Court were thinking that, perhaps, the copyright issue had already been settled in Aereo’s favor six years ago, in a lower court decision that the Justices had in fact chosen then not even to review.

That ruling goes by the short-form name of Cablevision, because it involved a cable operator’s system of maintaining a computer hard drive at its place of business which allowed customers to call up from storage a desired digital recording for viewing at home, using a copy available only to that one user.

It was that decision, by the U.S. Court of Appeals for the Second Circuit, that led that court to uphold the legality of Aereo’s system, finding that it, too, depended mainly upon consumer choice, so there was no public performance of the copyrighted material when the customer downloaded it.

Justice Anthony M. Kennedy suggested that the lawyers pretend that Cablevision was a ruling by the Supreme Court, so what should be made of it in the context of Aereo’s situation?  It was the best hope for Aereo, because that company — and its lawyers — have basically argued that the whole legal issue surrounding its system is solved because the individual consumer makes all of the choices; thus, no illegal public performance of copyrighted works.

But, in the context of the argument Tuesday, that was a fine legal point.  Most of the energy, at least from the bench, was about the risk that the Court might rule in this case in a way that would smother the infant of digital innovation in its electronic crib.

After Justice Breyer first got such a worry on the table with his antique reference to wax recordings of music that are played with a needle, of all things, Justice Sonia Sotomayor did a bit of updating, and asked about the impact on “the Dropbox and the iCloud.”  She confessed her concern, saying “this is really hard for me.”  She was, of course, looking for reassurance.

The over-the-air TV broadcasting industry’s lawyer, Washington attorney Paul D. Clement, was not in the reassuring business on Tuesday.  He dismissed Aereo as a pirate of copyrighted music, not a simple peddler of hardware that people could use at home to watch TV.  “Aereo,” he said, coolly, “still owns all these facilities and they’re providing, through wire transmissions, these performances on an ongoing basis.”

Sensing, perhaps, that he needed to make things simpler, Clement tried to show the distinction through a “real-world analogy” between a car dealer and a vendor of a valet parking service.  Both of them, he said, provide cars to the public, but the dealer is providing a car, while the valet parker provides a service.  Aereo, he implied, is a service provider, not just a product dispenser.

The exchanges continued in that vein with a federal government lawyer, Deputy Solicitor General Malcolm L. Stewart, who is mostly siding with the broadcasters.  He seemed to have a little less technical knowledge than some of the Justices, but that did not much deter him from suggesting that the Court need not worry much in this case about “the cloud,” which he seemed to prefer calling “pure cloud locker service.”

He was candid enough, though, to tell Justice Kennedy that, if the Court interprets the Cablevision decision as validating the individual consumer as the one who chooses to “perform” a copyrighted work, then “it’s hard to see how you could rule in favor of our position here.”

Aereo’s lawyer, Washington attorney David C. Frederick, could not have had a better lead-in to his argument than Stewart’s concession.  Aereo’s whole case, he made clear throughout his argument, depends upon the Court looking at Aereo’s system as seeing only the end-user, calling up his or her own downloads for private viewing. 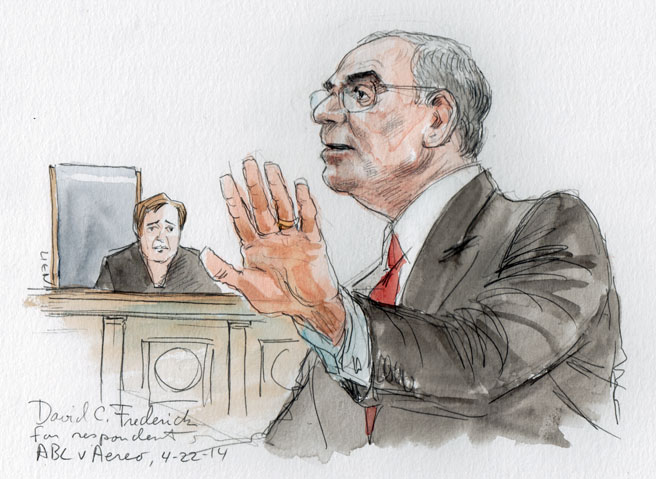 All that his client does, Frederick said, “is attempting to entice consumers to replicate on the cloud what they can do at home at lower cap costs and more efficiency.”  It’s like using the Internet, he added: “You can’t do multiple channels on the Internet anyway.  You can only do a single video stream at a time.  So whether you have one big antenna or whether you have lots of little antenna [as Aereo does], you still have to compress the signal and only one can go over the Internet at a time.”

His ultimate rhetorical weapon, though, given the concerns of the Justices about where this case potentially might lead, was a repeated suggestion that “the cloud computer industry” is deeply worried about how the Court might rule.

If what Aereo does is illegal, he argued, “every time somebody stores something in the cloud, whether it’s a song, a video image or the like, if it happens to be something that somebody else has  stored in the cloud, the act of one person initiating it and perceiving it is going to implicate the public performance right, . . . that’s why the cloud computing industry is freaked out about this case.”

No more so, it seemed, than the Justices themselves.