At considerable potential cost to the federal government, the Supreme Court ruled Monday that land swapped with, or transferred to private owners under an 1875 law became their property in full again once a railroad that ran across the property has been abandoned.  The decision turned mainly upon an argument that the government had made to the Court seventy-two years ago and won — an argument that now was turned against it. 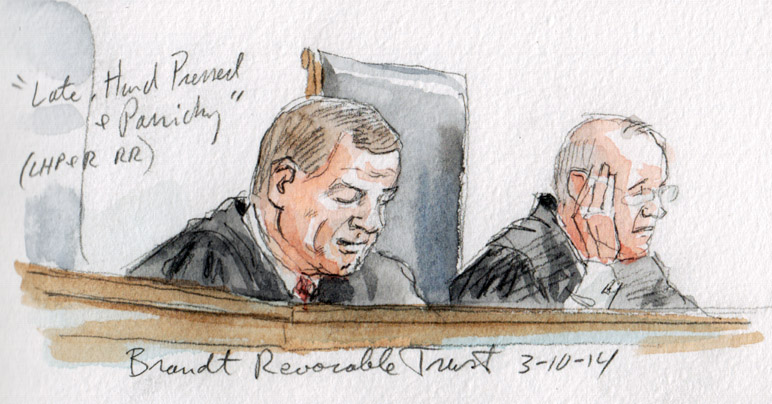 If some of the land governed by this case, formerly lying beneath railroad tracks, has been turned into bike and hiking trails for the public’s use, the government faces claims for compensation to private owners, sums that the government has said may run into hundreds of millions of dollars.  Justice Sonia Sotomayor noted that prospect as she dissented alone from the eight-to-one ruling in the case of Marvin M. Brandt Revocable Trust v. United States.

Chief Justice John G. Roberts, Jr., the author of the Court ruling, made clear that the decision only applied to former railroad rights-of-way that lay across private parcels that the government had conveyed to private individuals under the General Railroad Right-of-Way Act of 1875.  The decision would not apply to the rights-of-way property that railroads abandoned after October 1988, because a law passed by Congress that year made clear that those lands would return to federal ownership once the railroads gave them up.

The dispute between the Roberts opinion and Justice Sotomayor’s dissent focused mainly on the meaning of a 1942 decision by the Court, and on whether railroad right-of-way ownership disputes should be treated by their own set of property laws rather than general property law principles.

Roberts wrote that the 1942 decision, in Great Northern Railway Co. v. United States, virtually dictated the outcome in this new case, and that the decision was based upon legal principles that apply generally to land that a property owner gives away, with conditions attached to determine what happens after the conditions no longer exist.

The decision found that the Great Northern precedent had established the rule that land conveyed to private ownership by the government under the terms of the 1875 law, with a condition attached that some of the land be used for the roadbed of a rail line, returns to the ownership of the private occupant once the railroad surrenders the right-of-way at the end of railway service.

The Chief Justice said that this was the argument the government made in 1942 (a point disputed by Justice Sotomayor), and it remained binding on the government now even though the Justice Department argued in this case that lands transferred with right-of-way conditions attached should always revert to U.S. ownership once the railroad ceases to use the lands.

It is unclear just how many acres (primarily in western states) will be covered by the new ruling, although the Justice Department had told the Court that the case involved the legality of “thousands of miles of former rights-of-way” that the public now uses as recreational trails or park lands.

If the owner got a right to the land under the 1875 law, but the part that formerly lay under railroad tracks has been converted to some public use, the owner may sue the federal government in the U.S. Court of Claims for compensation.  It is unclear what standard of value of the land would be used to determine how much compensation would have to be paid.

Monday’s ruling was a victory for a stubborn Wyoming family that was the lone holdout when the federal government tried to claim ownership of a twenty-eight-mile stretch of railroad right-of-way in southeastern Wyoming.  Successors to a railroad that had run into hard luck financially gave up its use of the right-of-way land in 1996.  But, twenty years earlier, the government in a land swap has transferred to the Marvin Brandt family an eighty-three-acre parcel in Fox Park, Wyoming.   The conveyance of the land was conditioned upon railroad use of the right-of-way.

The transfer was made under the terms of the 1875 law, and the Brandts were told that a railroad which crossed their land would have use of the right-0f-way until it was surrendered.  It did not say, however, what happened after such a forfeiture of railroad use.