Opinion analysis: Coverage of SOX whistleblower protection is no longer Up in the Air 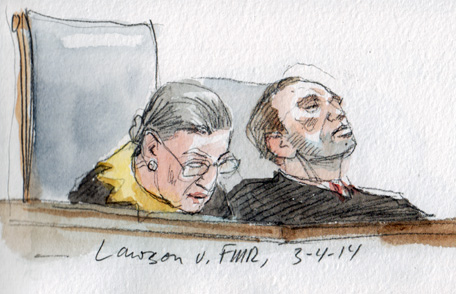 A divided Supreme Court issued its decision on Tuesday in Lawson v. FMR LLC, ruling that the anti-retaliation protection provided to whistleblowers by the Sarbanes-Oxley Act of 2002 (“SOX”) applies to employees of private companies that contract with public companies.  Justice Ginsburg authored the decision for the majority, which was joined by Justices Breyer and Kagan and Chief Justice Roberts.  Justices Scalia and Thomas joined the majority in principal part, but Justice Scalia wrote a separate dissent which Justice Thomas joined.  Justice Sotomayor, joined by Justices Kennedy and Alito, dissented.

And George Clooney found his way into his first U.S. Supreme Court opinion.

At issue is a short piece of statutory text, which provides, in relevant part:  “No public company . . . or any . . . contractor . . . of such company may [retaliate] against an employee . . . because of [SOX- protected activity].”  The court of appeals had held that this provision only applied to employees of public companies, not those of contractors.  This stood in contrast to a subsequent decision issued by the Administrative Review Board of the Department of Labor.  The ARB, in Spinner v. David Landau & Assoc. LLC   held that a contractor’s employee who blew the whistle on fraud covered by SOX would also be protected.  Because the whistleblower plaintiffs in Lawson worked for mutual fund advisers, rather than the public company mutual funds themselves (which, as is common in the industry, had few or no employees of their own), the decision of the court of appeals would exclude them from the statute’s coverage.

Justice Ginsburg begins the Court’s opinion with a description of the goals of SOX – to “safeguard investors in public companies and restore trust in the financial markets following the collapse of the Enron Corporation.”  That the decision then sides with the plaintiff whistleblowers reflects the Court’s embrace of SOX’s broad goals and a willingness to interpret the statute in ways most likely to remedy the harms it addressed.

The Court also found that its reading was consistent with interpretations of the model upon which Congress based the SOX provision – an air-carrier whistleblower statute – which has been interpreted to cover employees of contractors and subcontractors of air carriers.

The Court “resist[ed] attributing to Congress” a narrower goal in its inclusion of the phrase “contractor” in the anti-retaliation provision.  The defendant companies had argued that Congress meant only to protect against the possibility that a public company would retain an outside contractor to administer retaliation so as to avoid the statutory anti-retaliation provision.  The defendants, in their briefs, drew on George Clooney’s character from the film Up in the Air – an “ax-wielding specialist.”  The phrase “contractor,” argued the defendant employers, was included only to address the ax-wielding specialist.

The Court rejected the limited interpretation urged by the defendant employers – to avoid empowering public companies to outsource termination – as inconsistent with the statute’s text.  Because Clooney’s contractor did not actually make decisions about terminating employees, hiring him wouldn’t protect a public company from a SOX whistleblower claim – it would not “insulate the company from liability.”  To the Court, the narrower reading of the statute would not provide protection to the public companies, and thus render the phrase “contractor” entirely superfluous.  Nor was the Court persuaded that the “ax-wielding specialist” was a real-world problem to which Congress sought to respond.

The Court also resisted the defendants’ emphasis on the statute’s caption, which reads, “Whistleblower Protection for Employees of Publicly Traded Companies.”  Although the court of appeals viewed the caption as an “explicit guide,” The Court, citing the Court’s 1947 decision in Trainmen v. Baltimore & Ohio Railroad Co., described itself as having “placed less weight on captions.”  When the statute’s caption appears inconsistent with “numerous indicators” in the statute suggesting a broader interpretation is appropriate, the caption could not “take the place of” the text.

The Court also found unpersuasive the argument made by the employers – and embraced by the dissent – that a broad reading of the statute could lead to claims by household employees of corporate officers.  The Court agreed with the Solicitor General that various limiting principles could be employed to address concerns over an overly expansive application of the statute – such as interpreting the term “contractor” not as covering any “fleeting” relationship involving a contract, but only lengthier relationships.  Yet the Court did not feel compelled to identify what those limits ought to be, since the plaintiff whistleblowers fell into a “mainstream application” of the anti-retaliation provision.

Justice Scalia (joined by Justice Thomas) agreed that the Court’s conclusion “logically flows” from the statutory text.  He wrote a separate opinion, however, to avoid endorsing the majority’s “occasional excursions beyond the terra firma or text and context, into the swamps of legislative history.”

Justice Sotomayor (joined by Justices Kennedy and Alito) describes the majority decision as “a stunning reach.”  The dissent criticizes the majority’s failure to acknowledge that the SOX anti-retaliation provision is “deeply ambiguous.”  Finding the text ambiguous, the dissenters would place greater weight on the statute’s captioning and titles.  The dissent also suggest that the majority’s reading would produce “absurd results” – for example, creating a federal action for a babysitter terminated by a Walmart employee after the babysitter expressed concern that the employee’s teenager had engaged in an on-line swindle and regulating employment relationships between “individuals and their nannies, housekeepers, and caretakers.”

While the majority’s decision might serve “a laudatory purpose,” it is, to the dissenting Justices, not one that reflects “the statute Congress wrote.”

In its opinion released Tuesday in Lawson v. FMR LLC, a divided Supreme Court confirmed that the whistleblower protection of the Sarbanes-Oxley Act extends to employees who work for contractors of public companies.  The Court reversed a holding by the U.S. Court of Appeals for the First Circuit that embraced a narrow vision of the protection provided by SOX.  The whistleblower plaintiffs in Lawson worked for private companies that served as advisers to public mutual funds.  The anti-retaliation provision of SOX – which mentions “contractors” — is susceptible to multiple interpretations.  It either includes employees of contractors, or (as suggested by the statutory caption) applies only to employees of public companies.  The Court ruled that the text itself, the overall structure of the anti-retaliation provision, its legislative antecedents, and statutory purpose favored a broader reading of the provision than urged by the defendants.  An employee of a contractor of a public company, retaliated against for engaging in protected conduct, would be entitled to pursue an anti-retaliation claim under SOX.

Recommended Citation: Geoffrey Rapp, Opinion analysis: Coverage of SOX whistleblower protection is no longer Up in the Air, SCOTUSblog (Mar. 5, 2014, 9:33 AM), https://www.scotusblog.com/2014/03/opinion-analysis-coverage-of-sox-whistleblower-protection-is-no-longer-up-in-the-aira/