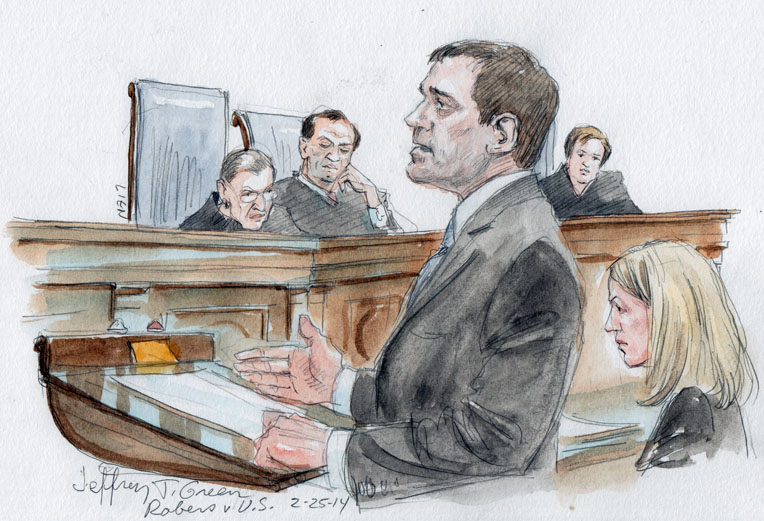 At issue in the case is the proper amount of restitution due from a defendant convicted of wire fraud related to a home mortgage loan.  Robers participated in a mortgage-fraud scheme in which he submitted fraudulent loan applications to obtain mortgages that he had no intention of paying. When he did not pay the mortgages, the lenders conducted foreclosure sales, at which they purchased the homes that the fraudulent mortgages encumbered.  The lenders sold the houses a few years later, for substantially less than the original loan amounts.

The relevant statute obligates Robers to pay restitution equal to the difference between the amount of money he took from the banks by fraud and the amount of any of the stolen property he “returned” to the lenders.  He claims that the value of the homes declined between the date of the foreclosure and the date that the lenders eventually sold the homes on the open market.  With considerable nerve, he claims that he should get credit for the value of the houses as of the date on which he suffered foreclosure, rather than the date on which the lender finally sold them.

The fundamental problem with that position is that Robers never “returned” any of the money the lenders advanced to him; he only returned the house that they took as collateral.  The government’s view is that the lenders got back the stolen property (cash) only when they converted the houses to cash upon sale, a position that seemed intuitively appealing to the Justices.  So, early in the argument, Justice Sotomayor queried Jeffrey Green (counsel for Robers) when the lenders got the money back. Green had no answer to satisfy her.

On a separate front, Justice Alito asked who should bear the risk that the asset might decline in value between the time of the foreclosure and the time of the sale.  Green answered, as he had to, that the victim of the fraud (the lender) should bear the risk because it had control of the asset. That point didn’t go down well with at least some of the Justices.  For example, when Green at one point explained that his client would have been trespassing if he had taken action to protect the property, the Chief Justice remarked: “Well, but the only reason he would have been trespassing is because, in fact, he did not live in the house as he promised the bank he would when the bank gave him the money. . . .  So why shouldn’t he bear the responsibility for that consequence?”

Much of the argument, for both sides, involved a meandering hypothetical propounded by Justice Breyer in which a defendant returned a valuable baseball bat as restitution for a transaction in which the defendant had defrauded a victim of cash. The point of the hypothetical seemed obscure to Green, but as Breyer finally came to his point he seemed to think it obvious that the judge should credit the debtor for the value of the bat at the time it was sold.  Breyer asked: “[W]hy wouldn’t it work that very same way here?

Arguing for the government, Assistant to the Solicitor General Sarah Harrington started her presentation by embracing Breyer’s bat hypothetical; Justice Breyer seemed to think her answer – the credit should equal the receipts from the sale – obviously correct.

Much of her presentation involved the question of undue delay.  Several Justices wanted to know what would happen if the lender waited too long before selling the house; the question is a favorable one for the government because it assumes that it already has prevailed and that the Justices are thinking about limitations on the legal rule they might articulate in their opinion. Harrington’s response had two points.  First, she emphasized that the record in this case contained absolutely nothing to support a finding of delay, a point that went notably unrebutted.

Second, she repeatedly conceded that a decline because of undue delay would mitigate the restitution amount.  When Justice Sotomayor asked if it would be appropriate to credit the defendant for what a “reasonably diligent creditor . . .  could or would or did obtain” for the collateral, Harrington readily agreed.

The only other topic on which Harrington received sharp questioning was whether the victim should bear the risk of loss.  On that point, she naturally thought it made more sense for the defrauding defendant to bear losses reasonably attributable to the fraud – which would include whatever happens to the value of the house while the creditor uses reasonable efforts to sell it.  That discussion came to a head when Justice Scalia pointedly asked: “Why should the defendant here subsidize the banks playing the market? That’s what you are saying.”

Harrington’s response seemed to defuse the issue entirely: “Sometimes it goes down, but other times it goes up.  And the trend over time is that the housing market goes up, and so more often than not in the larger picture it will inure to the benefit of the defendant.”

Based on the briefing, it was reasonable to expect that Robers’s position would be difficult to defend at oral argument; the Justices’ skepticism was no surprise.  I think we’re probably in for a relatively uncontested affirmance in this one.