Recess appointments power in jeopardy, but to what extent? Today’s argument in Plain English

This morning’s oral argument in National Labor Relations Board v. Noel Canning, the challenge to the constitutionality of the president’s recess appointments to the federal labor relations board, checked many of the boxes for high-profile cases.  There were long lines and cameras outside.  Inside, there was a full press gallery, from which reporters craned their necks to try to see the celebrities (or at least what passes for celebrities in Washington):  Senate Minority Leader Mitch McConnell, seated near White House spokesman Jay Carney and White House counsel Kathryn Ruemmler.  There were sardonic comments by Justice Scalia, and there was high-quality advocacy.  But unlike many high-profile cases, there seemed to be at least some degree of consensus among the Justices, virtually all of whom expressed skepticism of the federal government’s broad defense of the president’s recess appointments power.  At the same time, however, a few Justices seemed wary of upending the longstanding practice – by presidents of all ideological stripes – with a ruling that would sharply limit the availability of recess appointments.  Whether they can convince their colleagues to reach some sort of middle ground, however, remains unclear. 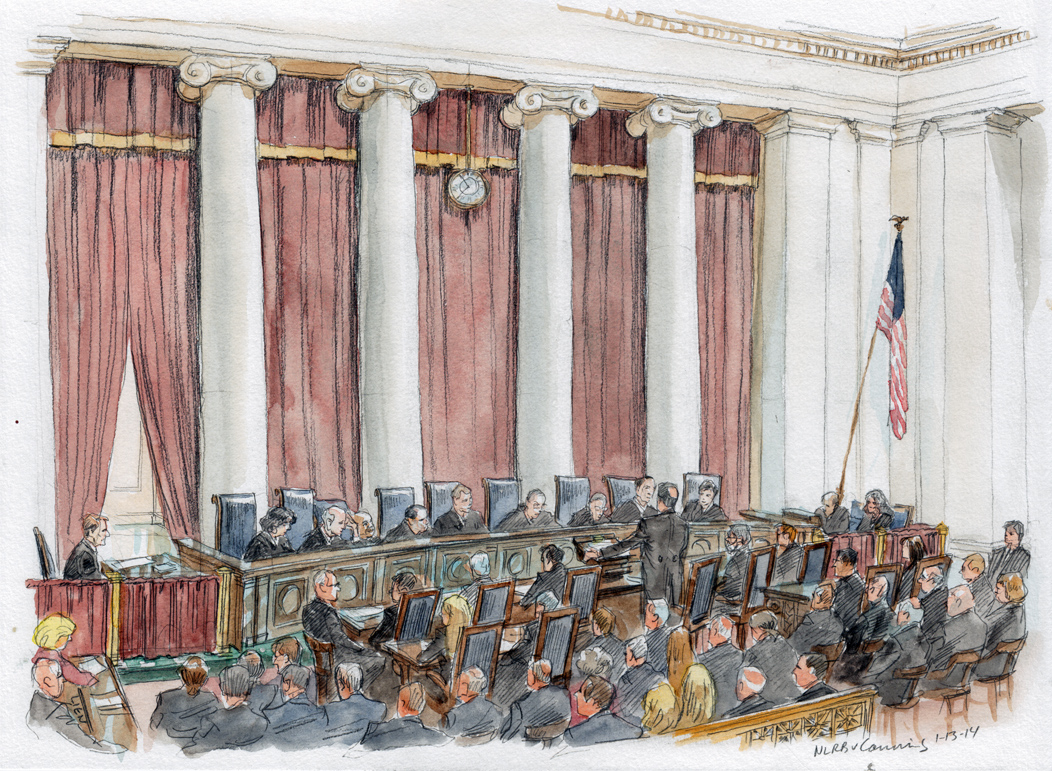 Arguing on behalf of the federal government, Solicitor General Don Verrilli began with the big picture, telling the Court that a decision invalidating the president’s recess appointments to the NLRB would “repudiate the constitutional legitimacy” of thousands of appointments going back to George Washington.  But that prospect didn’t seem to move many of the Justices; Chief Justice John Roberts quickly sought to clarify that Verrilli was not suggesting that the actions of those recess appointees would be invalid going back more than two centuries.

And although Verrilli also tried to characterize the case as raising “fundamental questions of constitutional structure,” most Justices were dubious that modern recess appointments were consistent with what the drafters of the Constitution had in mind back in the eighteenth century – that is, allowing the president to fill vacancies (thereby ensuring that the government could function) when senators were scattered all over the United States for long periods of time, without the benefit of modern communications or the ability to return to Washington quickly.  Justice Elena Kagan  suggested that the clause was in fact a “historic relic,” as recess appointments are now primarily deployed to deal with “congressional intransigence,” rather than emergencies.  “This is not,” she noted, “the horse and buggy era anymore.”  Justice Samuel Alito, who sits next to Justice Kagan on the bench but often votes very differently from her in high-profile cases, told Verrilli that he was “making a very aggressive argument in favor of executive power that has nothing to do with whether the Senate is in session.”  And even Justice Ruth Bader Ginsburg, who has been the leader of the Court’s liberal wing since Justice John Paul Stevens retired in 2010, observed that these days “the Senate is always available” because it can be “called back on very short notice.”

The Recess Appointments Clause authorizes the president “to fill up all Vacancies that may happen during the Recess of the Senate, by granting Commissions which shall expire at the End of their next Session.”  One of the questions before the Court – whether the president can only use his recess appointments power to fill vacancies that are created during the recess, or whether it is enough that the vacancy existed at the time of the recess – seemed to create particular difficulties for the Justices.  On the one hand, several of them seemed to regard the text as making clear that it’s the former.  On the other hand, some of them seemed perplexed about how to rule on this question in light of the apparent contradiction between the text and the longstanding practice of making recess appointments in the latter scenario as well.  Justice Antonin Scalia, who places a premium on adhering the text of the Constitution as it was originally understood, left little doubt that he was not concerned about the discrepancy, asking sarcastically whether, if you ignore the Constitution often enough, the meaning can change?  But other Justices seemed more troubled by the prospect of jettisoning a history that, as Justice Kagan described it, “points so much in the other direction.”  Representing Noel Canning, attorney Noel Francisco (who had just watched the Justices pepper Don Verrilli with questions) tried to downplay those concerns, arguing forcefully that the political branches “have no authority to take away the structural protections” provided by the Constitution.  But his strong position may not have satisfied all of the Justices, who later discussed the prospect that, when the Founders drafted the Constitution, the word “happen” might have even had a different meaning than it does now.

The Justices pressed both sides on the other question raised by the lower court’s decision:  whether the president can make recess appointments during any break in the Senate’s business, or only in the formal breaks between the two sessions of a particular Congress.  Both Justice Ginsburg and Justice Kennedy told Don Verrilli that the government’s argument – which would allow recess appointments during any break, not just the ones between sessions – needed a “limiting principle,” to prevent the president from making recess appointments even during very short breaks.  But on the other hand, Justice Alito asked Noel Francisco to explain why the purpose of the Recess Appointments Clause wouldn’t apply to any long break, whether it was during or between sessions.  More than one Justice suggested, as Justice Kagan did, that “it is really the Senate’s job to determine whether” it is in a recess, a sentiment echoed repeatedly by lawyer Miguel Estrada, who had a fairly easy time of it during his fifteen minutes arguing on behalf of Senator Mitch McConnell.  Chief Justice John Roberts wondered whether the Senate’s power to define its own recesses was “so comprehensive that it could pass an order” indicating that, at least for purposes of recess appointments, it was never in recess.  A middle ground, if there is one, could come from a question that the Justices added to the case at Noel Canning’s request:   the Justices could rule that, whether the break occurs between or during a session of Congress, it’s not actually a “recess” if the Senate continues to hold brief sessions every few days, even if only one or two senators attend and no real work is done.

At the end of his time at the lectern, Francisco urged the Court to rule broadly, citing some of its landmark cases on criminal sentencing as a reminder that the Court “has never shied away from enforcing the Constitution,” even when it might be disruptive.  Although that was certainly true in those cases, we will have to wait and see whether the Justices will be equally bold on recess appointments.  When they do issue their decision, we will be back to report on it in Plain English.