Argument recap: When compromise is the problem

Skeptics who wonder whether Congress can handle a tough issue like gun control without mucking it up might well have felt vindicated after an argument in the Supreme Court on Wednesday morning.  Congress compromised when it tried to close a loophole on anonymous buyers of guns, but even the government concedes that it left a whole lot of opportunities for just that.  That came out clearly in the argument on Abramski v. United States.

At a time when gun rights vs. gun control continues to roil the national conversation about violence, the closest the Court is getting to that debate this Term is a case about an attempt by Congress to keep guns out of the wrong hands by regulating “straw purchasers” — buyers who go to gun dealers to purchase guns for someone else.   But the more the Justices and two lawyers talked Wednesday, the clearer it became that the loophole may have widened, not closed.  Even Al Capone, apparently, could get a gun through a loophole, if he were still around. 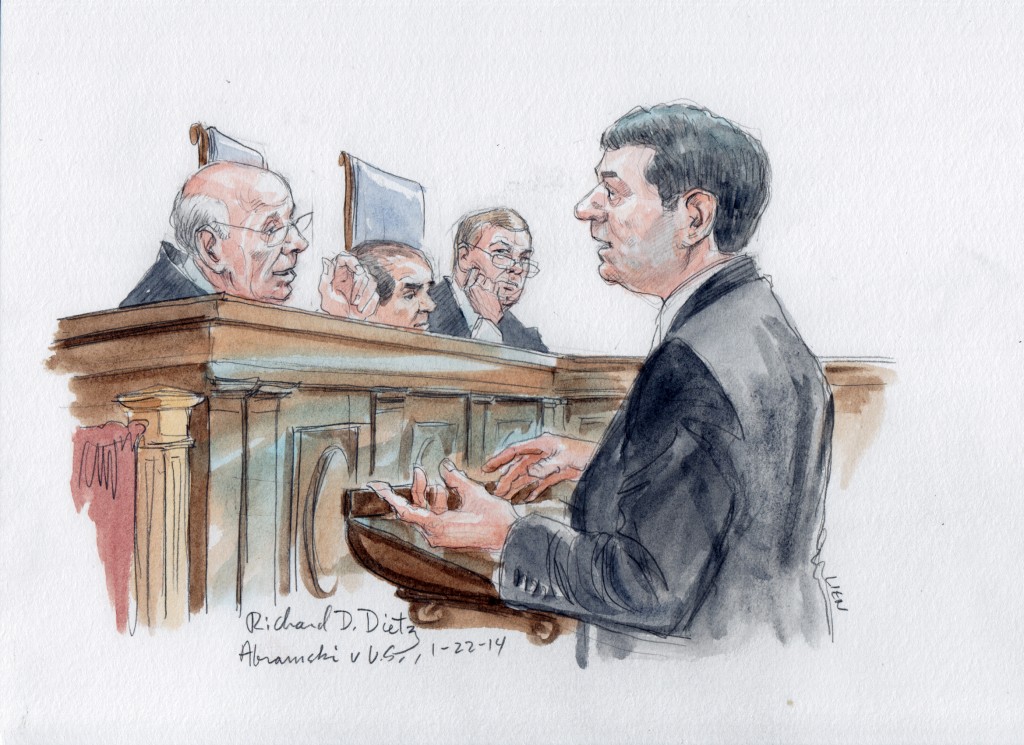 Most of the hour at the Abramski hearing was taken up by attempts by Justices to figure out just how guns get bought, sold, transferred, or given away — even by opportunistic dealings in a gun store parking lot — and when, if ever, any of that activity is illegal under federal gun law.

The hypotheticals flowed fast and furious, and the overall effect was to illustrate that the language Congress chose for the perceived problem of wandering weapons was anything but clear.  At times, the hearing actually bordered on the amusing — as, for example, when Justice Samuel A. Alito, Jr., conjured up the image of a “Mr. Straw” running a very busy gun-buying operation that showed how easy it was to get around the law.  So, Alito said, Congress did something “utterly meaningless.”

Richard D. Dietz, a Winston-Salem, North Carolina, lawyer for an individual convicted of being a straw purchaser, did his best to try to undermine the very notion of straw purchasing, but appeared to have his best moments when confirming for the Justices the variety of situations in which guns might pass from hand to hand entirely outside the regulatory structure set up by Congress.  “The law,” he said candidly, “may have holes in it.”

He told Justice Elena Kagan, for example, that compromises in passing the law at issue had shown clearly that Congress did not want to intrude into the wide range of private sales of guns “between citizens.”  The law was aimed at the first sale, Dietz argued, but not beyond it, and especially not when a gun is transferred from someone legally entitled to have it to someone else also eligible to be a gun owner.

Justice Sonia Sotomayor, with a note of despair in her voice, wondered aloud whether the law was so unclear that it just meant “a buyer is a buyer is a buyer.”   She suggested that, if the law were that opaque, could a buyer sell a gun to a person barred from having it?  Dietz said there were other laws to take care of that.

The seeming lack of clarity in the law — and the concessions the government had had to make about what it did not outlaw — were continuing problems during the argument of the government’s lawyer, Assistant to the Solicitor General Joseph R. Palmore.

It also turned out to be a problem for Palmore that the government’s gun-regulating agency, the Bureau of Alcohol, Tobacco and Firearms, had previously interpreted the law in much the same way as Dietz suggested it should be read now.  Although Palmore said the interpretation had changed twenty years ago, that did not keep the Justices from bringing up the prior position several times.

His main argument was that, in trying to set up a system to monitor the movement of guns, to keep them from the wrong hands and to allow them to be traced after use in a crime, was that Congress had focused tightly on what gun dealers can do to identify the real buyers in the first instance.

But that argument seemed only to entice the Justices into pursuing more energetically what happened with guns after the initial purchase — including, perhaps, creating an opportunity for an “Al Capone” to get a weapon with ease, as Justice Breyer suggested.

Perhaps the low moment for Palmore was when Chief Justice John G. Roberts, Jr., noted that the language in the law had been “fought over, tooth and nail” by the opposing sides in the gun control debate, and that the compromise which resulted simply had nothing to do with the idea of a “straw purchaser.”  That, of course, was one of attorney Dietz’s main talking points.