Between the complete silence of Chief Justice John G. Roberts, Jr., on the issue on Wednesday and the very active commentary and questioning of Justice Elena Kagan seems to lie the fate of state laws that seek to protect abortion clinics, their patients, and their staffs.   It seemed apparent, in a new “buffer zone” case from Massachusetts, that the Chief Justice holds the key vote on how far such zones are likely to be restricted, but that Kagan may help provide some cover for a decisive ruling that mandated narrower zones. 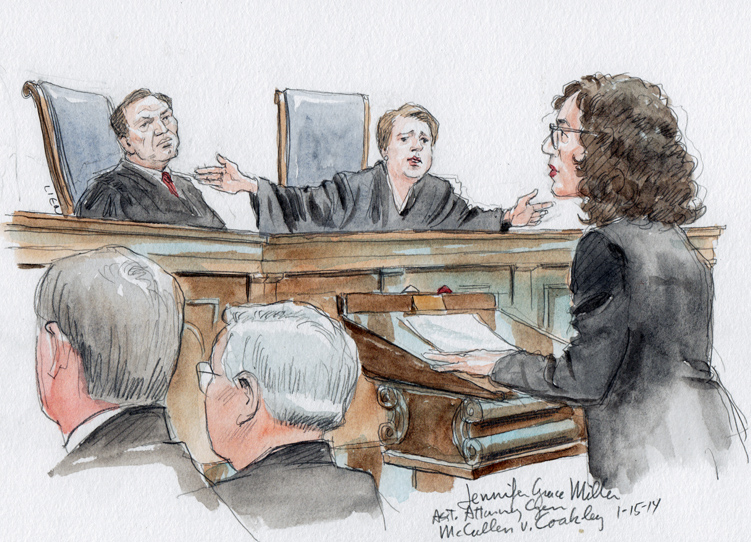 The three dissenters from the Court’s last major ruling in favor of abortion clinic buffer zones left no doubt in the hearing on McCullen v. Coakley that they have not changed their minds, and it appeared more than likely that Justice Samuel A. Alito, Jr., will join their opposition.  If the Chief Justice were also to become an ally, buffer zones that are not confined explicitly to stopping violence or actual physical obstruction may well be doomed altogether — on strict First Amendment principles.

That scenario would clearly nullify a 2007 law passed in Massachusetts that makes it illegal — with a few exceptions — for anyone to “knowingly enter or remain on a public sidewalk adjacent to a reproductive health facility, within a buffer zone that extends outward 35 feet of any entrance, exit or driveway.”

Justice Antonin Scalia (one of the dissenters when the Court upheld a different kind of buffer zone in 2000) led the verbal attack on the Massachusetts law on Wednesday, repeatedly insisting that what the anti-abortion challengers want to do is not to protest at all, but just “to talk to the people.”   If they actually were staging protests, he said, it might be permissible to require them to stand back for thirty-five feet.   Justice Alito also said explicitly that “what these people want to do is speak quietly.”

If that perspective forms the basis for a decision on the power to insulate abortion clinics, it would create a considerable degree of freedom to engage in what anti-abortion organizations call “sidewalk counseling.”

Justice Kagan, who at one point had asked what was wrong with a state simply “having everybody just take a step back” from a protected site, did suggest that thirty-five feet might well be too big a required separation.  “That’s pretty much this courtroom,” she said (misjudging the actual size by some fifty to sixty feet.) “That’s a lot of space.”

At another point, she asked a lawyer for the challengers whether a twelve-foot separation zone would be permissible, indicating that she was exploring alternatives to the Massachusetts law (which actually created a bigger zone than any other state had — a fact brought out by the challengers’ lawyer, seeming to surprise Kagan).

Justice Stephen G. Breyer (who was in the majority for the 2000 decision) kept pressing throughout Wednesday’s hearing for the evidence of violence and disorderly conduct that had led the Massachusetts legislature to enact the buffer zone limit.  But Justice Scalia and some other Justices who seemed to share his views pointed out that there has never been a prosecution under the law for that kind of conduct outside a clinic.

By the end of Wednesday’s hearing, it was hard to see how the Court — with a recent string of decisions supporting broad rights of free expression, in situations ranging from funeral protests to violent video games — would put together a majority to uphold a law that its lawyer repeatedly said was all about the use of public sidewalks as a forum for exchanging ideas.

Justice Breyer remains from the prior majority for a buffer zone law, as does Justice Ruth Bader Ginsburg.  Aside from the Chief Justice and Justice Alito, the members of the Court who have joined since then are Justices Kagan and Sonia Sotomayor.

Justice Ginsburg’s participation left little doubt that she thought Massachusetts had reasons to act as it did, given “a considerable history of disturbance” outside clinics in the state.  State officials, she said, had no way to know in advance when violence might break out, so they had to create an empty zone around the clinics.

While Rienzi conceded that there have been some “bad actors,” his primary emphasis was upon the activities of the grandmother whose name is on the case, Eleanor McCullen, who, he said, is even forbidden now to be near a clinic even in the early morning hours when no one else is even around. 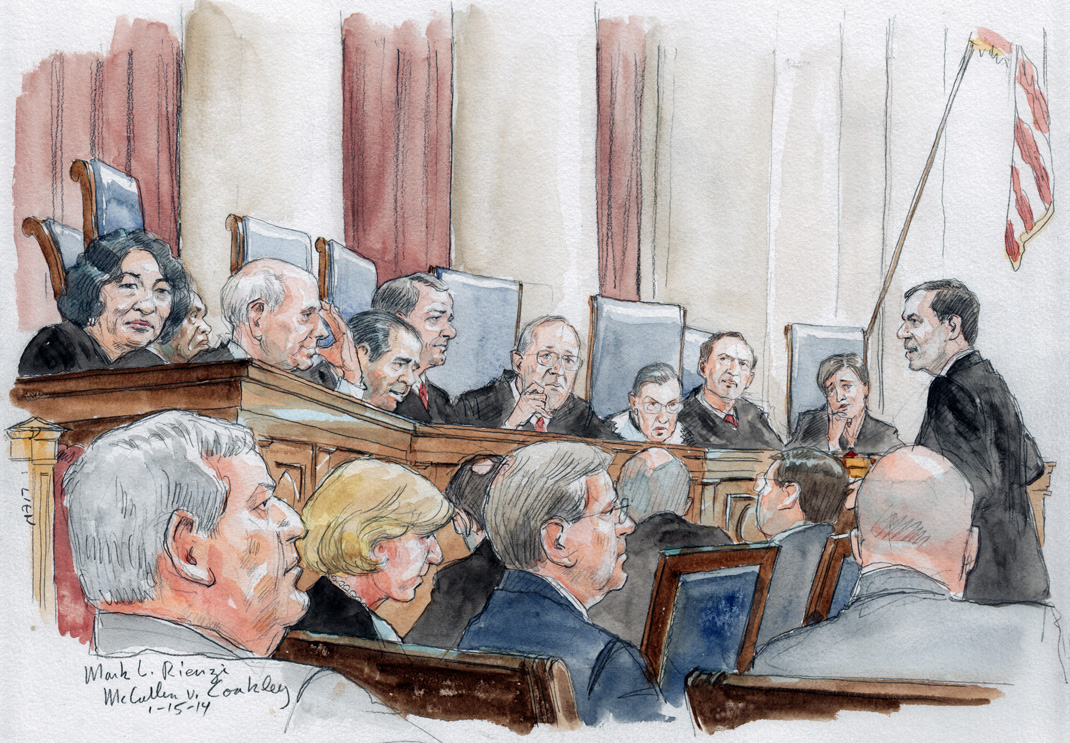 The other two dissenters from the prior ruling on buffer zones were Justice Anthony M. Kennedy and Clarence Thomas.  Thomas, as is most often his practice, said nothing during the argument. Kennedy early in the argument sought to test Rienzi on what a state was to do if it had found that one kind of buffer zone law had not worked and so felt a need to adopt a stricter one.

But the overall thrust of Kennedy’s questions and comments was that he perceived the Massachusetts law as a one-sided restriction on discussions of abortion, not about preventing violence.   For example, he suggested that the law does appear to create a ban on comments about abortion only to those who are opposed, saying that the law would permit a clinic staff person to welcome a patient about to have an abortion, even to tell her how important it was for her to have come to the clinic.

That was a reference to a part of the law that allows clinic staff members to come and go in the buffer zone, so long as they are doing so as part of their employment.  Although state officials have interpreted that as not giving them the freedom to promote abortion, Kennedy said that would indicate that the law was even more of an attempt to suppress speech about abortion.