Seeming a bit troubled about allowing the Senate to have an on-off switch on the president’s power to temporarily fill vacant government posts, the Supreme Court on Monday indicated that it may yet allow just that.  Even some of the Justices whose votes the government almost certainly needs to salvage an important presidential power were more than skeptical.

A ninety-three-minute hearing on the Constitution’s grant of power to the president to make short-term appointments to fill vacancies was at times a somewhat anxious exploration of whether history or constitutional text should govern the extent of that power.  On balance, text seemed to be winning out, and that appeared to favor the Senate more than the White House.

Perhaps the most unfortunate moment for presidential authority was a comment by Justice Stephen G. Breyer that modern Senate-White House battles over nominations were a political problem, not a constitutional problem.  Senators of both parties have used the Constitution’s recess appointment provisions to their own advantage in their “political fights,” Breyer said, but noted that he could not find anything in the history of the clause that would “allow the president to overcome Senate resistance” to nominees.

Among other telling moments were these:

First, Justice Elena Kagan, although expressing some alarm that the country would wake up “one fine morning” and “chuck” two centuries of history of frequent presidential use of recess appointments, nevertheless said at least twice that “it was the Senate’s job to decide” when it goes out on recess, thus giving it the ability to control when, or if, the president may make such appointments.

Second, Chief Justice John G. Roberts, Jr., commented that the Senate has “an absolute right to refuse” to approve any of a president’s nominees, whether or not the president thinks that such a refusal is “intransigence.”  Roberts also sought to explore how far the Senate could go to frustrate a president over recess appointments, wondering if it could simply decide never to take a recess.

Third, Justice Anthony M. Kennedy made several remarks suggesting that, while he had some doubt about what the wording of the Recess Appointments Clause might mean, he was attracted to the notion that the Senate could control that whole process by returning to its chamber for no-business (“pro forma”) sessions to take away a president’s recess powers.  The scope of that option is embraced in a question that the Court agreed to add to the case at the urging of the opponents of broad presidential power to fill vacancies when the Senate is technically out of town.

The lengthy argument, taken as a whole, seemed to go considerably better for those opponents than for the defender of presidential authority, U.S. Solicitor General Donald B. Verrilli, Jr.  The Solicitor General made little headway in arguing that the Constitution meant the president to have significant power to make temporary appointments, and that deferring to the Senate would, in effect, destroy that power.  He seemed to startle even some of the more liberal judges when he said that, if it was a contest between historical practice and the words of the Constitution, practice should count the most. 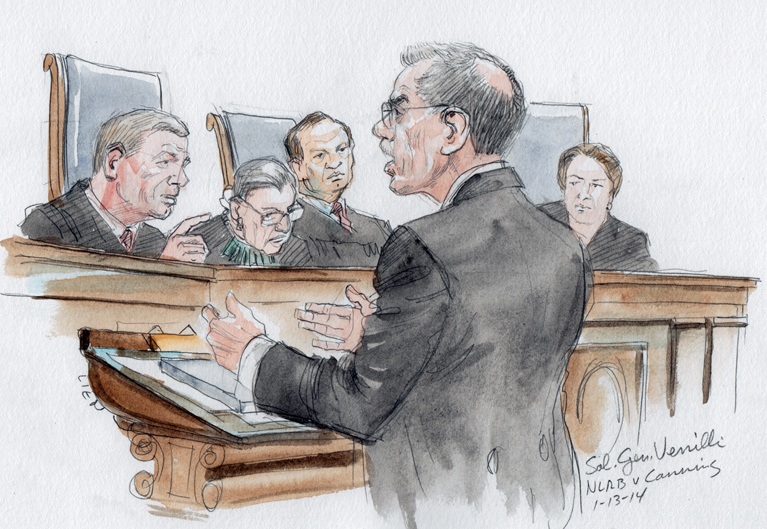 Washington lawyer Noel J. Francisco, arguing for a Washington State business firm that lost a National Labor Relations Board decision made with the votes of two Board members who got their jobs by recess appointments by President Obama, pushed the apparent advantage he had quite far, suggesting that it is up to the Senate to decide when to “trigger” the president’s recess appointment authority. 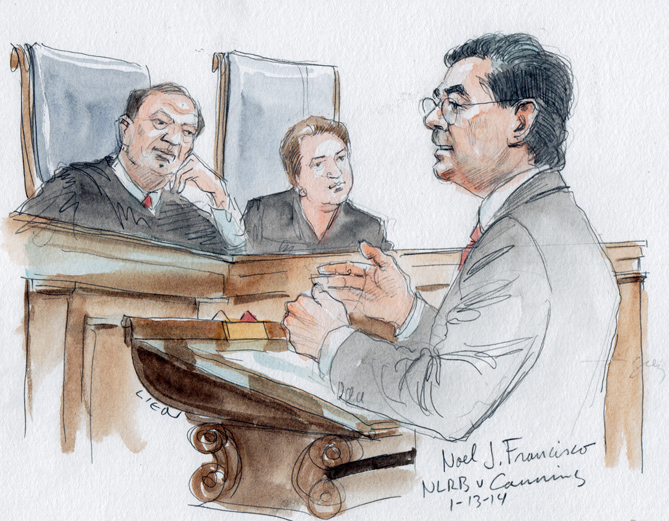 Although Francisco said that the filling of government positions was a joint power of the president and the Senate, he left no doubt that the Senate should be basically in charge of when the president can use that power “unilaterally” when the Senate is not around.

Washington lawyer Miguel A. Estrada, speaking for the Senate’s current Republican members, made a vigorous defense of leaving the Senate to decide its own procedures, including when it takes a recess.  He also argued that, if presidents are frustrated by failing to get a nominee through the Senate, a nation of 300 million people is large enough that the president could come up with another nominee. 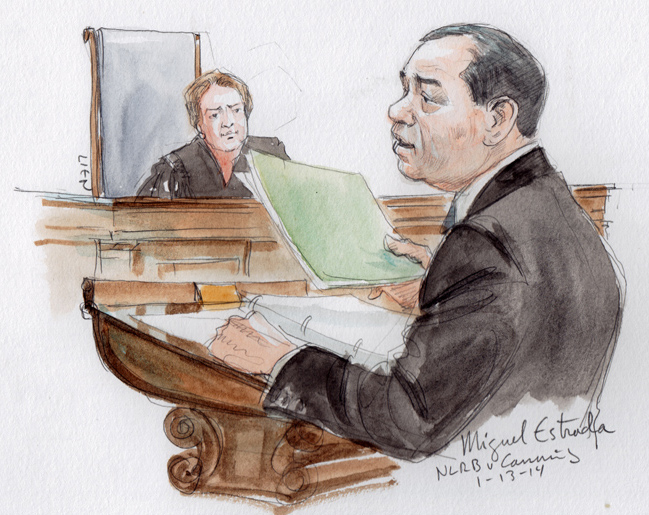 As the hearing unfolded, the only Justices who consistently asked questions or made comments that appeared to support presidential authority to act alone to make short-term appointments were Ruth Bader Ginsburg and Sonia Sotomayor.