Argument recap: A tense hour at the Court

Syria’s use of chemical warfare on its own people ordinarily would not be on the Supreme Court’s agenda, but the Justices wanted to talk about it Tuesday and a top Obama administration lawyer warned the Court repeatedly not to get in the way of the government’s handling of problems like that.  Some of the Justices — indeed, a seeming majority — bristled at the idea of being sidelined just because the case in front of them may affect foreign policy.

The argument in Bond v. United States reached the grand constitutional scale that has been its potential all along.   At the end of an hour-long hearing, it appeared that the government might just have to hope that it loses the case on narrow grounds, because it might lose it in a sweeping way.  Some of the Justices openly canvassed ways to cut back, perhaps sharply, on the national government’s power to negotiate or to implement global treaties — the very thing that U.S. Solicitor General Donald B. Verrilli, Jr., was trying so hard to head off.

Tensions rose at times in the argument, as Justices began to sense how strongly the government was arguing against a judicial role in second-guessing how the U.S. carries out international obligations, and as Verrilli began to sense that the Justices — with several aggravating hypotheticals — were toying with a matter of dreadful seriousness. 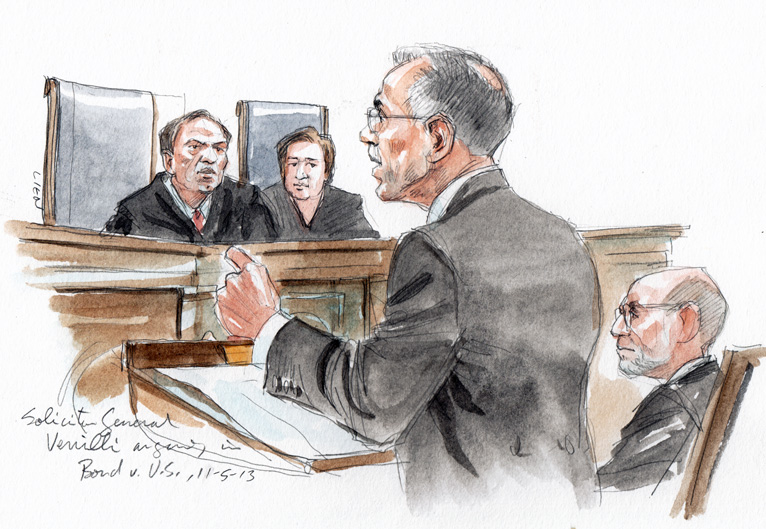 The case, on one level, is only about the power of federal prosecutors to make a federal criminal case out of a woman’s attempt to get revenge on her husband’s lover by trying to poison her, but on another level it is about whether the Constitution puts any limits at all on what the president and Congress can do under the Constitution’s treaty power.  The woman, Carol Anne Bond, was convicted of violating a law that was passed by Congress to carry out a global treaty against the spread of chemical weapons.

The woman’s lawyer, Paul D. Clement, had to struggle at times in trying to persuade the Court that prosecutors had gone too far in pursuing Bond, as some of the more liberal Justices expressed deep concern about limiting national treaty power.  Early in the argument, Justice Sonia Sotomayor mentioned the Syrian chemical warfare issue, and others also used it as the backdrop for their questions.

Justice Sotomayor said “it would be deeply ironic” if the Court were to find unconstitutional the U.S. role under the chemical weapons treaty at the very time the global community was trying to deal with Syria.  Justice Elena Kagan cautioned about asking judges to try to “get into the minds” of those negotiating world treaties like the chemical weapons pact.

But Verrilli seemed to be tested more rigorously in trying to persuade the Court not to start drawing lines to limit treaty power or treaty implementation, as the more conservative Justices — sometimes using sarcasm — challenged his core argument.  The conservatives were joined in their challenges by Justice Stephen G. Breyer, who often is a strong defender of national government power.

But it was Breyer who seemed to irritate Verrilli the most, when the Justice discussed how open-ended the weapons treaty was — so much so that it might even reach disgraced cyclist Lance Armstrong’s use of performance-enhancing drugs — and pressed Verrilli to say what limits, if any, there were on the treaty’s reach.  “Hypotheticals are just hypotheticals; they are not real cases,” Verrilli shot back.

Verrilli, though, also had to face some tart responses.  Justice Samuel A. Alito, Jr., said that the hypotheticals the Justices were reciting were not real cases “because you haven’t prosecuted them.”  Alito went on to test the government position by noting that, a few days ago, he and his wife had passed out “chemical weapons” to children — that is, Halloween chocolate.  He noted that “chocolate is poisonous to dogs,” and the treaty bans the use of any chemical harmful to animals as well as humans.

When Justice Breyer commented lightly that “there was chocolate all over the place,” Verrilli bluntly commented: “This is serious business.”

Chief Justice John G. Roberts, Jr., repeatedly questioned the Solicitor General about whether there is any constitutional limit on Congress’s power to enter treaties or implement them, and whether a treaty could give Congress the authority to claim “national police powers.”   Verrilli answered that it would be “unimaginable that the Senate would ratify” such a treaty.

But that answer prompted Justice Anthony M. Kennedy to say: “It seems unimaginable that you did bring this prosecution (of Carol Bond).”

Justice Antonin Scalia even brought into the argument the current controversy over same-sex marriage, suggesting that the government’s argument was so sweeping that the U.S. could join in a treaty approving same-sex marriage, and requiring Congress to pass a law making that binding nationally, on all of the states.  Verrilli, Scalia suggested, was trying to “drag Congress into areas where it has never been before.”  The Solicitor General answered that the Constitution’s structure, with checks and balances, put limits on treaty-making and treaty implementation.

Verrilli argued that there was no dispute over whether the chemical weapons treaty was valid, so the implementing law should be, too, because “there is no daylight” between what each covered.  But Justice Scalia directly disputed the point, saying the implementing law went considerably further.

Bond’s lawyer, Clement, repeated the argument made in his written briefs that the Court did not have to do anything to curtail Congress’s treaty power, but rather only needed to give the implementing law a narrower interpretation.  It should be understood, Clement said, that it only applied to the “warlike” uses of chemicals, and Bond’s attempt to poison her “romantic rival” was not that.

But Justices Kagan and Sotomayor expressed impatience that Clement had not spelled out just what limiting principle he was advocating.

The Court will now begin deliberating privately on the case, and is expected to decide it by next spring.