Less than two minutes into the Supreme Court’s new review on Tuesday of the use of race in college admissions, it was clear that Justice Anthony M. Kennedy has problems with a legal theory that can limit a state’s power to take away the race option.  And, for the next hour, Kennedy was unusually active, mainly in exploring the potential flaws in that theory.

As the Court heard the case of Schuette v. Coalition to Defend Affirmative Action (docket 12-682), it appeared that Kennedy holds what is likely to be the decisive vote.  With Justice Elena Kagan not taking part, there are at most three votes to strike down Michigan’s ban on affirmative action in the admissions process, and very likely four votes to uphold it.

That leaves Kennedy, and if he joins in opposition to the state’s voter-approved “Proposal 2,” the Court could split four to four and the measure would be struck down, as the U.S. Court of Appeals for the Sixth Circuit had ruled.  But the Court no doubt will strive to avoid that outcome, and Kennedy seems to have the power to see that it doesn’t happen. 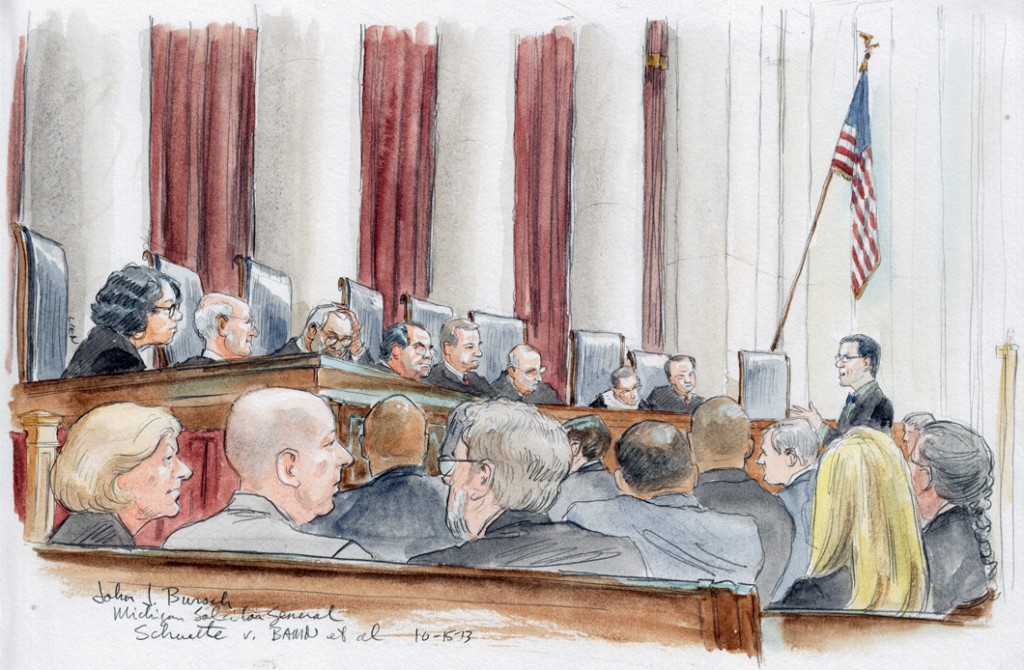 The opponents of “Proposal 2” persuaded the Sixth Circuit that the measure skews the political process in the state, so that minorities who want public universities to make race one of the factors in choosing entering classes have a much harder challenge than, say, those who want the children of alumni to receive a preference.  That is the “political process theory” that had emerged in two Supreme Court rulings — one in 1969, the other in 1982 — striking down voter-approved measures that took away public benefits favored by racial minorities.

From his very first question in the hearing, Justice Kennedy said he was focusing tightly on whether that theory should be brought to bear against Michigan’s ban.  This was just after Justice Sonia Sotomayor (who emerged as the strongest critic of “Proposal 2”) had commented that the people of Michigan had done exactly the same thing as the voters in those prior cases had to scuttle minority-preferred policy options.  She saw the situations as “identical.”

Kennedy began looking for factual differences between the prior cases and the one now before the Court.  And then he showed real fascination with suggestions by Michigan’s Solicitor General, John J. Bursch, as to how the Court could distinguish the prior precedents without having to overrule them.  Bursch seemed to sense that the Court would not be ready to overrule those precedents outright, but their embrace of the “political process theory” does remain a potential hurdle for “Proposal 2.”

Bursch argued that both of the prior decisions had been based upon a finding that the voters there had acted out of an explicit intent to discriminate against racial minorities, while, he said, “Proposal 2” was not meant to to discriminate but rather to promote racial equality by doing away with “preferences.”   The Michigan ballot measure, he said repeatedly, promoted equality, not bias.

As the argument proceeded, Busch was drawing the toughest questioning from Justices Sotomayor and Ruth Bader Ginsburg.  Sotomayor, for example, pointedly accused Michigan of being part of an ongoing effort to put opportunity just out of the reach of minorities, by moving “the game posts” for them “every few years.”

Such probing apparently prompted Chief Justice John G. Roberts, Jr., who has established a strong record of aversion to race as a factor in public policymaking, to help out Bursch by commenting that the aim of “Proposal 2” was not actually to put an end to affirmative action.  Of course, Bursch promptly agreed.

Amid these exchanges, Justice Kennedy would intercede from time to time to question how the “political process theory” would apply to various scenarios.  He wondered, for example, whether it would be constitutional if a state’s voters required a three-fourths vote of approval in a legislature to pass any bill that would authorize affirmative action. Bursch said that would go too far, but insisted that “Proposal 2” did nothing like that.  What that measure did, he said, was respond to the Supreme Court’s own invitation in 2003 urging that ways be found to do away with reliance upon race to determine public policy.

Aside from the Chief Justice, the probable votes to uphold “Proposal 2” apparently would come from Justices Samuel A. Alito, Jr., and Antonin Scalia (as well as Justice Clarence Thomas, who said nothing on Tuesday but is known to be a foe of affirmative action in general).   Those Justices became more involved when an American Civil Liberties Union lawyer, Mark D. Rosenbaum of Los Angeles, went to the lectern to challenge “Proposal 2.” 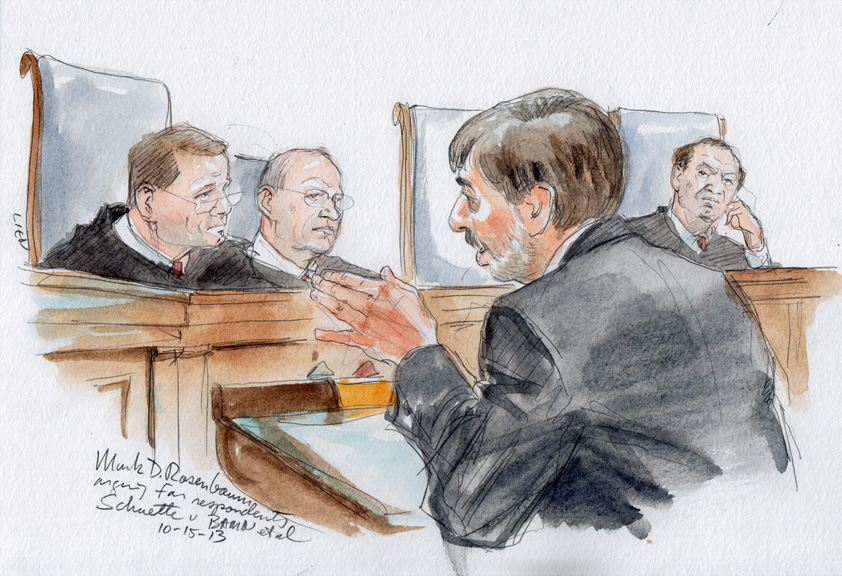 Instead of joining in those thrusts, Kennedy went back to exploring just when the “political process theory” would work to inhibit changes in existing affirmative action policy, at varying levels of state government.  It was clear that he was trying to define a line at which that theory would actually break down, thus limiting its utility as a way to judge the constitutionality of a measure like “Proposal 2.”

Rosenbaum’s time in argument was difficult enough, especially in the exchanges with Justices Alito and Scalia, but it turned out to be less challenging than the barrage that confronted the other lawyer opposing “Proposal 2,” Detroit attorney Shanta Driver (who was a last-minute substitute for another lawyer scheduled to be in the argument).

Driver’s opening comments got her immediately into trouble.  She asked the Court to return the Fourteenth Amendment’s guarantee of legal equality “back to its original purpose,” which was to protect minorities.  Justice Scalia took strong offense to that, saying he thought the aim of the Amendment was to guarantee equality to all people. 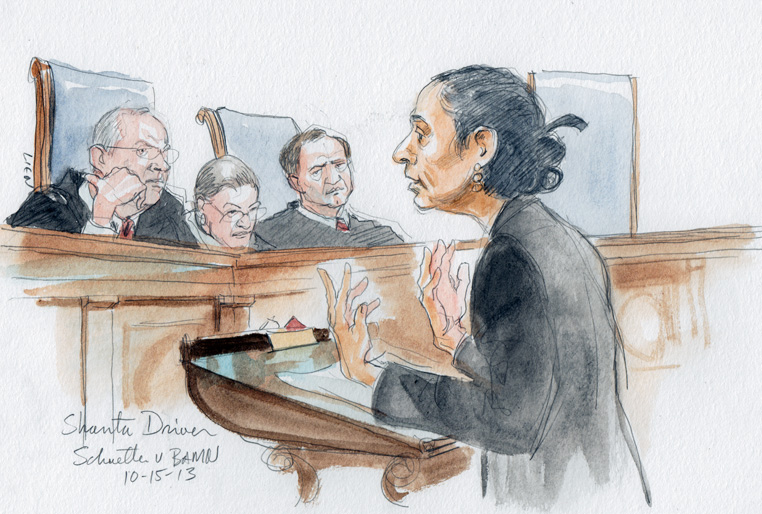 The lawyer tried to hold her ground, but Scalia kept testing her thesis.   Had the Supreme Court ever issued an opinion saying that the Amendment was only to protect minorities? he asked.  Driver conceded that there was no such case.

Once again, rather than joining in those uncomfortable exchanges, Kennedy used his questions to Driver to continue to probe where she stood on scenarios in which affirmative action options would be taken away after existing for a time.

Kennedy’s focus on that theme also was echoed, to a degree, by Justice Stephen G. Breyer’s questions.  He repeatedly sought to test just where the line should be drawn between allowing and disallowing states to take away the option of affirmative action in public policy.