Accessing the papers of Supreme Court Justices: Online & other resources

If one goes to the “Frequently Asked Questions” page of the Supreme Court website, there is this question: “Where can I find the papers of the Justices?” Indeed. And here is the answer tendered: “The Biographical Directory of Federal Judges, maintained by the Federal Judicial Center, provides location information for the Justices’ papers. Search by the name of the Justice and then click on the link to ‘Research Collections’ to see where the papers are available. Many collections of papers are located at the Library of Congress and at academic and research institutions throughout the country. Depending upon the institution, some material may be available online.” 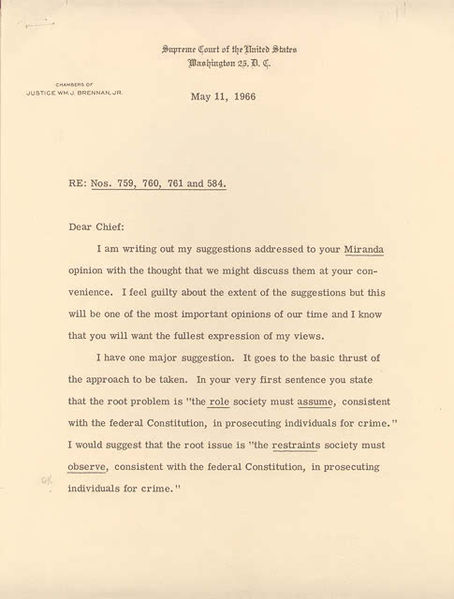 Building considerably on what is found in the Biographical Directory and aided by the assistance of my colleague Cheryl Nyberg (coordinator of library reference services at the University of Washington School of Law), the following lists were compiled. Some of the sources provide only a few documents, whiles others contain thousands of documents. The first list is followed by two others, which include selected online sites and offline sources with finding aids for archival collections. While not comprehensive, it is the best resource of its kind currently available online.

What is set out below is also intended to complement the list of books by Supreme Court Justices posted earlier on SCOTUSblog (see here) and republished and edited in the Journal of Supreme Court History (see here).

Burger, Warren  (College of William and Mary) – Images and some text. In

accordance with the donor agreement, the Warren E. Burger Papers are closed to researchers until 2026.

The next set of references has online guides and finding aids to select collections, but the Justices’ papers themselves are not available online.

See also Harvard Library and see here for his correspondence with Justice Holmes.

(“I speak for a majority of the active Justices of the Court,” Chief Justice William Rehnquist wrote in an extraordinary and stinging letter to James H. Billington, the Librarian of Congress, “when I say that we are both surprised and disappointed by the library’s decision to give unrestricted public access to Justice Thurgood Marshall’s papers.”)

The following sources provide additional information (some online, others not) concerning the Justices and their papers.

Justices’ Correspondence to Wives & Others

(“As suggested by the Sandra Day O’Connor and Ruth Bader Ginsburg collections . . . , the papers of Supreme Court justices and appeals court judges contain a wealth of information on federal case law relating to women of all classes, races, and regions.”)

Kathryn A .Watts, Judges and Their Papers

Lydia D’Addario, Personal Papers of Justices of the Supreme Court: A Brief Look at Access Issues (2005)

S. Sidney Uelmer, “Bricolage and assorted thoughts on working in the papers of Supreme Court Justices,” 35 Journal of Politics 286 (May 1973)