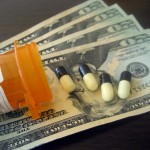 Showing a strong suspicion that big drug companies with deep pockets may be using their money to shield shaky patent rights, the Supreme Court on Monday for the first time cleared the way for antitrust lawsuits to challenge payoffs between brand-name drugmakers to keep would-be competitors who make generic substitutes temporarily out of their market.

But winning such lawsuits will hardly be easy, because the Court refused to start with the premise that such payments are probably illegal.  The five-to-three decision in Federal Trade Commission v. Actavis (docket 12-416) was based far more on antitrust than patent law, and was at least a warning that settling lawsuits — at least in the drug industry — is a practice not necessarily free from risk.  (Justice Samuel A. Alito, Jr., took no part in the ruling.)

What was at stake in the case was a legal practice that has shown up most prominently in the drug industry: the so-called “pay to delay” practice under which a holder of a brand-name patent, after having its patent rights challenged, fends off the potential competition from a generic company with a big dollar payoff, running into tens of millions of dollars, in order to keep the patent monopoly intact.

Although the new style of antitrust lawsuit that the decision will permit was not free from ambiguity, the majority opinion written by Justice Stephen G. Breyer made two things very clear: first, that the mere fact that the generic was being held off only during the remaining period of a patent’s validity was not enough to make such a payoff immune to antitrust lawsuit, and, second, that such payment arrangements will not face a challenge under antitrust law in which they are presumed at the outset to be illegal.

Challengers will have to prove that the payoff was harmful to competition and thus illegal, under the customary “rule of reason.”  That is a theory under antitrust, not patent, law.  And, while the Breyer opinion expressed the expectation that this would not turn such antitrust cases into mini-trials on whether the patent was or was not valid, the dissenting opinion by Chief Justice John G. Roberts, Jr., argued that patent validity will be at the core, severely complicating — and raising the cost of — such lawsuits.

While Justice Breyer insisted that the Court was not really doing anything new or different, but merely applying conventional antitrust principles, the Chief Justice argued in dissent that the Court had never before — in the 123 years of the Sherman Antitrust Act — crossed the “Rubicon” of allowing antitrust law to dictate the legality of patent infringement settlements.

Whatever the ruling might bring about, when this particular case and potential other ones do go forward in federal trial courts, the decision was a major breakthrough.  The Court had been asked repeatedly to decide the legal fate of the settlement practice that lawyers called “reverse payment” arrangements in the pharmaceutical industry.  Now, the basic ground rules are set: antitrust law does apply, there is no flat immunity just because the no-competition deal would last only while a patent remained in force, and judges will have to work out just how to try such a case to keep the focus on whether or not such a deal was anti-competitive and likely would lead to a rise in drug prices for consumers.

The Breyer opinion was explicit that the Court was not ruling even on this specific case — a case filed by the Federal Trade Commission against a group of companies who had joined in a deal to postpone potential generic competition for the brand-name drug, AndroGel — developed by a Belgian company for treatment of low testosterone in men.  Low testosterone is a condition due to advancing age, or to some types of cancer, diabetes, or AIDS.

The Food and Drug Administration cleared the brand-name version for marketing in 2000, and within seven years its sales had topped $400 million.  The initial patent had run out, but the U.S. licensee — Solvay Pharmaceuticals, Inc. — had obtained a new patent on certain formulations of the drug.   Two generic companies sought in 2003 to get permission to market substitutes for AndroGel.   After fighting for three years over the validity of the Solvay patent, the companies worked out a “reverse payment” deal under which Solvay paid the generic firms tens of millions of dollars to settle their dispute.

That was the deal that the Federal Trade Commission challenged, contending that the deals were actually pacts not to compete, and thus were an attempt to extension Solvay’s patent monopoly longer than it otherwise would have been intact.   The case, however, ultimately was thrown out by the Eleventh Circuit Court.  It said that a “reverse payment” arrangement would violate antitrust law only if it extended monopoly rights beyond the normal patent period.

That is the result the Supreme Court overturned.   It did not rule for the FTC on the legality of this arrangement, but rather returned the case to set up an actual trial at which the FTC will have to prove its claims of illegality.

Although Justice Breyer’s opinion for the majority contended that the ruling might only have an actual impact in the drug industry, because of the peculiar terms of the law that Congress passed to try to encourage competition in the drug industry by getting lower-priced generic drugs on the market sooner, the dissenting opinion argued that the ruling was not likely to be confined to pharmaceutical companies, and would do grave harm to the entire concept that it is a good thing for lawsuits — especially expensive ones like patent fights — to be settled without trials.

The Breyer opinion was joined by Justices Ruth Bader Ginsburg, Elena Kagan, Anthony M. Kennedy, and Sonia Sotomayor.   Joining Chief Justice Roberts in dissent were Justices Antonin Scalia and Clarence Thomas.   As indicated, Justice Alito did not take part, presumably because of his earlier involvement with the issue when he was a judge of the Third Circuit Court.

A company that invents a new product, such as a new drug for treating medical conditions, can obtain the exclusive right to sell that product to consumers by obtaining a patent from a federal government agency, the Patent and Trademark Office.   Patent rights originated in the Constitution, with the idea that giving an inventor an exclusive right to exploit the new idea was a way to give an incentive to be innovative in ways that help people or the community.

While a patent remains intact, for a period of years, the owner of the patent has a commercial monopoly — in other words, no other company that makes the product, or a complete substitute for it, can sell its competing version.  In the drug industry, having that monopoly usually means — if the drug turns out to be very popular — an accumulation of huge profits during the early years of the drug’s sales in the marketplace.

Under a special federal law that applies only to the drug industry, companies that make generic substitutes can gain a right to put their version on the market, just as soon as the brand-name owner’s patent expires, as all patents do after a specified period.  But if the brand-name patent owner can postpone that entry into the market, it can continue to exploit its monopoly.

The issue before the Supreme Court, in Monday’s decision, was whether it is illegal for the brand-name company to provide a payoff to a potential generic competitor, to keep it from entering the market earlier than it otherwise might have.  Sometimes, the brand-name companies have been willing to pay very substantial sums in order to delay their competitor’s entry into the market.

For years, the federal courts have been wrestling with whether those “pay to delay” deals, as they are sometimes called, are illegal, on the theory that they interfere with potential competition between higher-priced brand-name drugs and lower-priced generic versions of those drugs.  The U.S. Federal Trade Commission has for years argued that such deals are almost sure to be harmful for competition, so they should almost always be treated as illegal under federal laws that promote competition — the antitrust laws.

In settling that issue for the first time on Monday, the Supreme Court did not say that such arrangements were always illegal, but that at least they are subject to being challenged under the antitrust laws, to test whether they are or are not harmful to competition.

[Disclosure:  Goldstein & Russell, whose lawyers contribute to the blog, filed an amicus brief in support of the FTC in the case.]