UPDATED Tuesday pm:  Arizona officials have announced that they will now pursue the suggestion offered by the Court’s opinion on how the state might be able to gain a right to require proof of citizenship for voters.  The official statement is here.

In a ruling that might easily be misunderstood if not read very closely, the Supreme Court on Monday simultaneously strengthened Congress’s hand in expanding the ranks of eligible voters, and yet assured states that they retain the ultimate power to decide who gets to vote.  The apparent bottom line: states cannot now require voters to show proof that they are U.S. citizens, but the Court has given them a plan that could gain them that power.

The decision in the case of Arizona v. Inter Tribal Council of Arizona (docket 12-71) had major potential for sorting out the dual roles of Congress and the states in deciding eligibility to vote, and that was even more vital in the midst of a new national controversy over efforts among some states to narrow eligibility.  The end result will give both sides in that controversy encouragement, but perhaps rather confusing legal guidance. 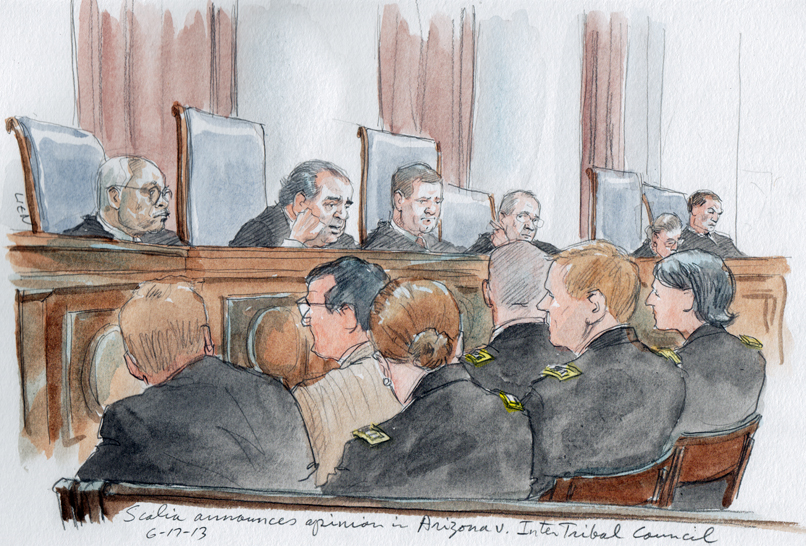 For those who would look to Congress to keep open, and expand, the right to vote for the presidency and for members of Congress, Justice Antonin Scalia’s opinion for a majority (seven to two on several points, six to three on one other very key point) promised that Congress could pass its own laws on the voter registration process, and states would have to yield to those.   In this case, a federal voter registration form only requires would-be voters to declare that they are citizens, but Arizona would also require them to show hard proof that they are.   On that point, apparently, Arizona must yield to the federal form, and sign up those who present it.

The part of the Scalia opinion that went the furthest in Congress’s favor — and on which the majority was only six to three, because Justice Anthony M. Kennedy would not join on this point — laid down a seemingly very broad rule on when state election law requirements must yield to those enacted by Congress.

There is a customary rule that courts are to operate on the basic premise that, when Congress and the states act in the same field, state laws won’t be displaced unless Congress explicitly says they must yield.  That “presumption against preemption,” in technical terms, does not even apply to the joint enterprise of Congress and the states in regulating elections, according to the new decision.   Thus, in this one field, states do not get the benefit of the doubt when they pass election laws that appear to be, or are, different from what Congress has mandated.

If a reader of the Scalia opinion stopped at the top of page 13, the impression would be very clear that Congress had won hands down in the field of regulating federal elections.   But from that point on, there is abundant encouragement for what is essentially a states’ rights argument: that is, that the states have very wide authority to define who gets to vote, in both state and federal elections.

On the particular point at issue in this case — Arizona’s requirement of proof of citizenship before one may register to vote or actually vote — the Scalia opinion said that a state was free to ask the federal government for permission to add that requirement.   And, Scalia said, if that doesn’t work — either because the federal agency that would deal with such a request is either not functioning or says no — then a state would be free to go to court and make an argument that it has a constitutional right to insist on proof of citizenship as an absolute qualification for voting, in all elections.

The opinion seemed to leave little doubt that, if Arizona or another state went to court to try to establish such a constitutional power, it might well get a very sympathetic hearing, because that part of the Scalia opinion laid a very heavy stress on the power of states under the Constitution to decide who gets to vote.   Indeed, that part of the opinion said that the Constitution simply does not give Congress the power to decide who can qualify, but only how federal elections are run procedurally.

It will be up to lower courts — and election-law specialists — to sort out just how to reconcile the two parts of the Court’s majority opinion.   And it appears there may well be quite a few opportunities to do so, because of the rising number of efforts — particularly in states in which Republicans have control of state governments — to impose new voter ID and other restrictions on the right to vote.

If the Arizona ruling turns out, in the future, to widen the power of states to limit the right to vote, the decision might turn out to have been far more decisive than its internal contradictions suggested on first reading on Monday.

Justices Samuel A. Alito, Jr., and Clarence Thomas each filed a dissenting opinion, speaking only for themselves individually.   Justice Alito put most of his emphasis on a different way to read the federal voter registration law at issue, but spent considerable effort arguing that the road map the majority had laid out for states that want to impose a proof-of-citizenship requirement would not work in practice.

Justice Thomas’s dissent was mainly devoted to arguing that the Constitution gives Congress no role in judging who may register to vote, and that this is a power given exclusively to the states.

The Constitution divides up the power to determine who will be allowed to vote between state governments and Congress.  The states have the basic power to decide who is eligible to vote but, so far as state laws are aimed at who gets to vote for President or Congress, the Constitution gives Congress a back-up power to change or even to override those state laws.

The Supreme Court on Monday made a significant effort to try to sort out how to divide up this power, in the context of deciding whether a state may require would-be voters to show proof that they are U.S. citizens — both to register and to actually vote.  That proof requirement was challenged by various advocacy groups, because Congress in 1993 had passed a law designed to expand the ranks of voters, and a federal agency acting under that law has specified a form that voters may use to register.

The argument before the Court was that the federal law must control, because Congress had specified that, in filling out a federal form, all would-be voters had to do was to swear they are U.S. citizens, while Arizona went further and required an actual piece of official paper to prove citizenship.   The challengers argued that the two approaches cannot co-exist, so the state proof requirement had to yield.

On the one hand, the Supreme Court agreed that, for now, Arizona’s proof requirement must yield to the federal form’s approach — that is, it is enough to register, using that form, if the would-be voter swears that he satisfies the citizenship requirement.

On the other hand, however, the Court also ruled that Arizona can seek permission from federal officials to impose its proof-of-citizenship requirement.  If it fails with that request, it can go to court and argue that it has a constitutional right to make proof of citizenship a binding requirement for all voters.

It was the kind of mixed decision that can sometimes baffle lay readers and, in this instance, maybe even lawyers and judges, too, because the two parts of the ruling did not seem to be reconciled easily.